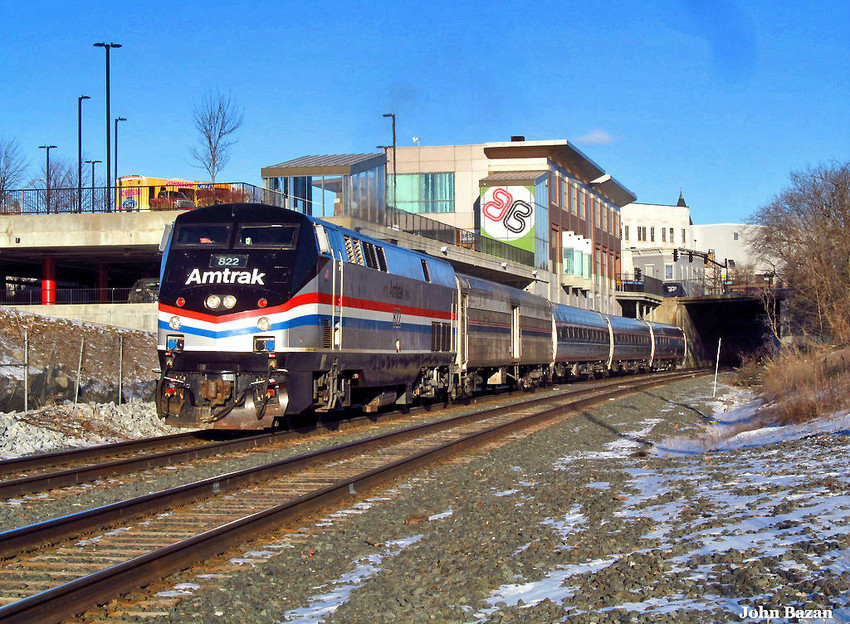 Editor’s note: This article has been updated to include information about Mr. Sporn.
Boston — In a boost to the hopes of rail enthusiasts, state Sen. Adam Hinds (D-Pittsfield) has succeeded in getting the state Senate to endorse a feasibility study of restoring passenger rail service from New York City to the Berkshires.

But in contrast to previous plans, the service being considered will take riders from Penn Station to the Berkshires via the Hudson River Amtrak route, and then east to Pittsfield, passing through Chatham, New York. Another plan that has been considered calls for passenger rail service to use the former Housatonic Rail line, now owned by the state, that runs south from Pittsfield to Lenox, Stockbridge and Great Barrington, and then through western portions of Connecticut. That route would terminate in Grand Central Station.

But that plan has been shelved, at least for now, largely because “we’ve not received very positive feedback from Connecticut,” Hinds said in an Edge interview.

“It’s huge,” Hinds said of the impact of the return of passenger rail to the region. “Previous studies that have looked at economic impact have pegged it at well over $600 million over 10 years.”

Hinds, a first-term senator who serves as Senate chair of the Joint Committee on Tourism, Arts & Cultural Development, believes weekend service linking New York City to Pittsfield between Memorial and Columbus days will bring more out-of-state tourists to the cultural attractions in the Berkshires and western Massachusetts.

Furthermore, Hinds said in a written statement, many seasonal homeowners in the Berkshires live in the state of New York and have few options other than to make the three-to-four-hour drive. Indeed, some potential tourists to the Berkshires do not even own vehicles, or they are loath to deal with traffic, and often forgo their visit to the Berkshires, causing the region to lose out on the dollars they would spend.

Hinds has another rail model in mind that could be seen as an inspiration for the Berkshires. Established in 2013, the CapeFLYER system restored seasonal passenger rail service from Boston’s South Station to Hyannis on Friday and Sunday.

CapeFLYER has been hailed as a major success, Hinds explained, allowing summer visitors to spend the weekend on the Cape without sitting in Cape traffic, which is notoriously bad. According to the governor’s office, four years ago during its first season, CapeFLYER carried a total of 16,586 passengers , with service extended from Labor Day to Columbus Day due to its early popularity among riders.

Hinds’ budget amendment, passed Thursday (May 25) by the Senate, directs MassDOT to explore the feasibility of duplicating this model in the Berkshires, in coordination with the state of New York State, along with regional and local officials. He says the working group should start its work in the next fiscal year, which starts July 1, and its findings are due no later than March 1, 2018.

“This is an important first step,” Hinds said.

This amendment is a part of the FY18 Senate budget. Once the Senate’s budget debate is complete, a six-member conference committee will be formed and assigned to negotiate the final conference budget.

According to Hinds’ amendment, the working group should convene by Oct. 1, 2017, “for the purposes of identifying and evaluating the economic and cultural benefits, and political, legal or logistical challenges to the Berkshires, western Massachusetts and the Commonwealth as a whole, of establishing direct seasonal weekend passenger rail service between New York City and Pittsfield.” (See Hinds interview below.)

The group will contact New York officials on the state, local and county levels to identify opportunities for collaboration and mutually-beneficial improvements and expansions in passenger rail infrastructure and service.

It’s not entirely clear who would sit on the working group, but Hinds’ amendment lists a representative from the secretary of the state Department of Housing and Economic Development, elected officials from the state and federal legislative delegations, Pittsfield Mayor Linda Tyer, the Berkshire County Regional Planning Commission and “existing rail service stakeholders.”

Hinds noted that the Berkshires are experiencing a population decline and are having trouble attracting young people or convincing those who grew up here to stay. He pointed to studies showing that millennials are less addicted to their cars than previous generations and that they are more likely to embrace mass transit than their parents.

State Rep. William “Smitty” Pignatelli (D-Lenox) told The Edge he thought another study was fine but he has long been convinced that passenger rail service would benefit the Berkshires. However, the logistics and financing have always been daunting.

Pignatelli pointed to a 2011 study by Williams College economics professor Stephen Sheppard predicted that the Berkshire economy would be enhanced by $625 million in the first decade of the rail service’s operation. But Pignatelli was excited that this latest push coming from his colleague Hinds includes a different route to New York City.

“I’ve been advocating that for years,” Pignatelli said. “It makes a whole lot more sense than Connecticut. Clearly, Connecticut doesn’t want to do anything.”

The state Department of Transportation announced in 2014 that it had reached an agreement to buy the railroad tracks used for freight traffic from Housatonic Railroad for a little more than $12.1 million. The money for the purchase came from $113 million set aside by the state to rebuild track infrastructure in anticipation of the revival of passenger rail service between New York City, Danbury, Conn., and Pittsfield. But the project could not be completed until the state of Connecticut would agree to fund significant improvements to its own tracks south from Canaan to Danbury.

The Massachusetts span of tracks runs 37 miles north from the state line at North Canaan, Conn., to Pittsfield. Even after receiving payment from the state, Housatonic Railroad retained a perpetual easement allowing the company to continue to operate its existing freight service. Officials have estimated the cost of the entire project from Pittsfield to New York City would cost $200 million, with half of that designated for the Massachusetts section.

Connecticut officials, including Gov. Dannel Malloy, have balked at the idea, both because of the cost (the state has been in a budget crisis for the last few years) and the perception that Connecticut would pay mightily for a project that would disproportionately benefit Massachusetts.

Now it looks as if Bay State officials have given up on the Connecticut approach, at least for the time being, opting instead to work with the state of New York.

Karen Christensen, who heads the Great Barrington Train Campaign, which had advocated the Connecticut approach, declined to comment this week until she had gathered more information about this development.

One Berkshire County resident contacted by The Edge was delighted. Eddie Sporn, a West Stockbridge-based real estate strategy and planning consultant and former New York City hedge fund executive, was enthusiastic about the possibility of the return of passenger rail service.

“This hopefully is the first step toward the ultimate goal of year-round passenger rail service to [New York City] along a route west from Pittsfield into New York’s Columbia County, then south along the Hudson River to New York City,” Sporn said.

Sporn had been doing some reading on the passenger rail scene when he stumbled upon a blog that suggested routing passenger service to the Berkshires through the Hudson Valley.

He then sent a more detailed plan to Hinds, Pignatelli and state Rep. Patricia Farley-Bouvier (D-Pittsfield). Within about a week, he heard back from Hinds’ office and had a meeting him.

“Let’s keep our fingers crossed that the amendment survives the budget conference committee with the Massachusetts House and then gets signed by the governor.”