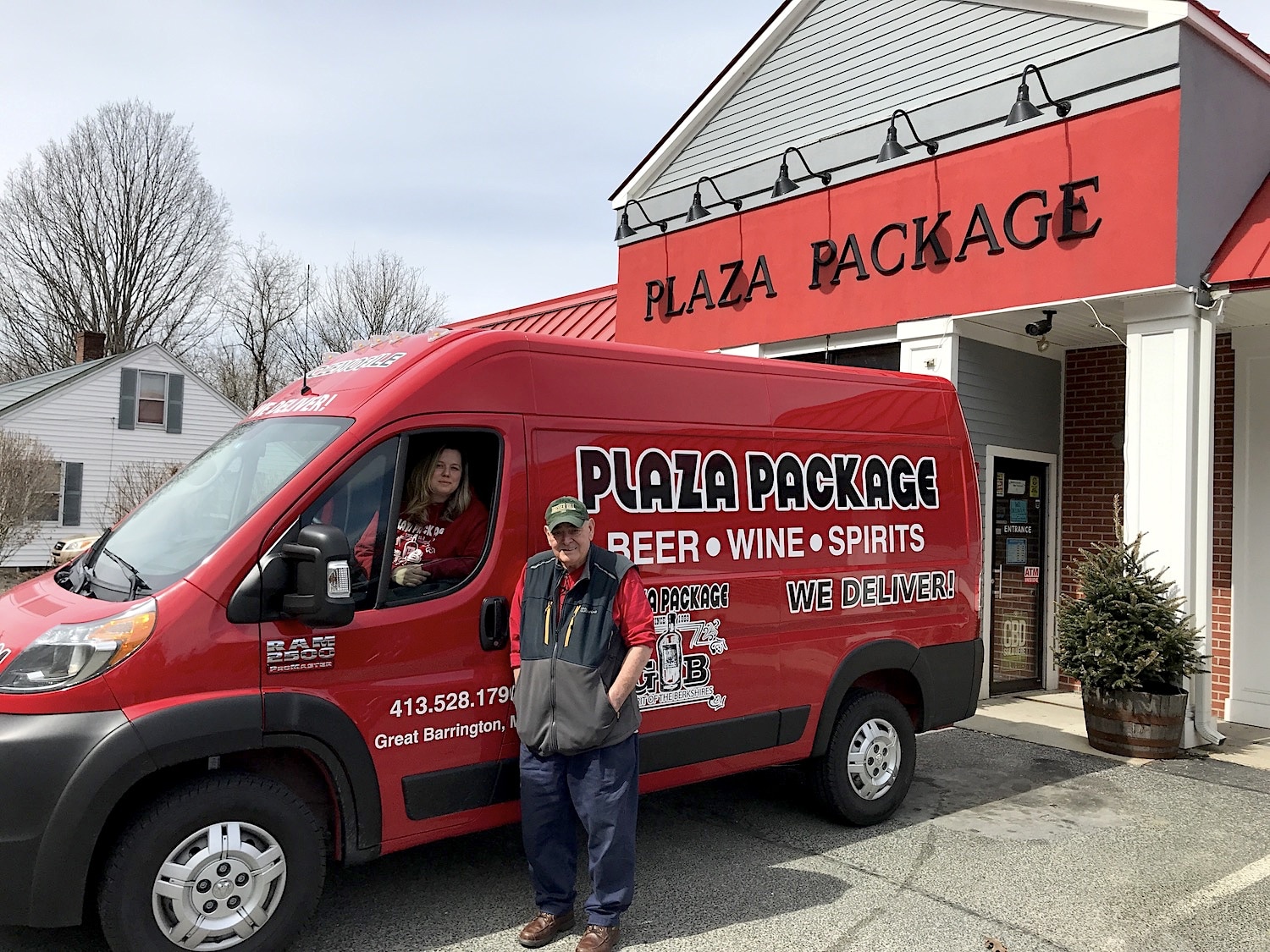 Great Barrington — Some call it “creative destruction,” the term coined by Austrian economist Joseph Schumpeter denoting the forced decline of longstanding practices as a result of innovation. Others simply call it disruption.

Whatever your preference, it’s clear that the retail sector of the economy is undergoing tremendous change. Just as the advent of the automobile rendered buggy whips obsolete, so too has online retailing eliminated the need for endless arrays of bricks-and-mortar stores.

All one needs to do is look at the eight or so empty storefronts on Stockbridge Road; or the half-empty, tax-delinquent Berkshire Mall, which seems to close whenever the wind blows. These displacements, dubbed “Retailmageddon” by one pundit, are the inevitable result of the robust growth of online shopping.

Nowhere is that sort of disruption more apparent than in the alcohol business, where laws governing the industry have changed in recent years and consumer trends have developed a desire for convenience, variety and instant gratification.

One retailer in Great Barrington, Plaza Package Store, has moved into a realm that few others have tried: delivery direct to consumers. If properly licensed, almost all package stores in Massachusetts can make deliveries to larger events like weddings and other special events. But delivery of alcohol for those events typically requires significant advance notice.

Last month, however, Plaza Package took the plunge. Customers can now use a mobile app to order alcohol—or anything else the store sells, including snacks—and expect delivery within an hour. In other words, you can now order a case of beer or a bottle of Jack Daniels with the same impulse with which you can order a pizza.

“That’s kind of where this delivery system came from for us,” said Jennifer Andersen, who manages Plaza for her father, Ray Almori. “People are going online to Amazon. They want things directly to their doorsteps, so were offering the same thing.”

“My daughter noticed it’s become a big thing for deliveries, especially in big cities like Boston and New York,” added Almori, a Marine Corps veteran who served in Hawaii and Formosa (now Taiwan). He bought Plaza Package in 1983.

But there was work to do before launching the service. Staffing levels had to be adjusted and, of course, a delivery vehicle had to be obtained and customized. So a formidable-looking Dodge Ram ProMaster van, detailed in white over a fire-engine-red body, sits in the store’s parking lot, ready to spring into action on a moment’s notice. Almori and Andersen also use the vehicle, dubbed the Boozemobile, to pick up beer from area microbreweries for resale at Plaza.

There are, of course, some restrictions to the service. Customers must be 21 or over and Plaza cannot deliver out of state. There is a $20 minimum, a $4.95 delivery fee and the delivery area is limited to a 20-minute drive from Plaza Package on State Road. For larger orders placed well in advance, the delivery fee and service area can be waived.

There are two ways to order: by calling Plaza or by using Drizly, a free mobile app that allows customers to order alcohol directly from retailers who are registered with the service. In return, Plaza pays a fee to Drizly for the use of the software.

The option of using Drizly to order alcohol will come as a relief to the technologically deprived denizens of Berkshire County. After all, the ride-sharing services Uber and Lyft only came to the Berkshires recently and service in much of the county is said to be spotty.

Successful businesses are always on the hunt for growth opportunities, and package stores are no exception. But the stores face competitive threats that were hard to imagine only 15 years ago, says Rob Mellion, who is executive director and general counsel of the Massachusetts Package Stores Association, which lobbies for thousands of independently owned liquor stores across the state.

Mellion cited a 2006 U.S. Supreme Court decision, Granholm v. Heald, which ruled that laws in New York and Michigan permitting in-state wineries to ship wine directly to consumers, but prohibited out-of-state wineries from doing the same, were unconstitutional. That means that virtually any winery can ship directly to Massachusetts consumers and simply bypass the package stores.

Supermarkets are increasingly moving into the retail alcohol business, and craft brewers and distillers, some of whom are allowed to sell straight to consumers for off-site consumption, are also taking a bite out of sales. Almori said craft breweries now have about 3 percent of the retail beer market and their share is growing.

And early indications are that recreational cannabis sales, which only began in Berkshire County in January, may also be depressing sales of alcohol in package stores, Mellion explained.

“That’s where the package owners’ fear comes into play,” Mellion said in an interview. “It’s death by a thousand cuts.”

Mellion added that, “[legal] cannabis is having a tangible impact on alcoholic beverage sales across the country but it depends upon the location. Is there a dispensary nearby?”

Mellion said the effect on alcohol sales varies, depending on the age group, but in areas where recreational cannabis is legal and easily purchased, “there is a 4-6 percent retail impact” on liquor stores, which, he said, “makes sense because people have more choices” about what product to purchase.

In the three states where recreational cannabis has been legal the longest, trends in the liquor industry have remained consistent, according to the Distilled Spirits Council. Liquor sales went up in the three states—Colorado, Oregon and Washington—although wine and beer were either stagnant or continuing to trend downward.

Andersen said she often sees customers at Plaza who had just been to Theory Wellness, the recreational marijuana store on Stockbridge Road that opened in January. Those customers either mentioned they had just bought at Theory or they can be overheard complaining about the lines outside the store and the wait times to get in. Andersen has not seen any decline in sales since Theory opened in January.

“[Recreational cannabis] is also bringing in a lot of people from out of state who may not ordinarily come down this way,” Andersen surmised. That could change, she quickly added, if, as expected, recreational sales are legalized in New York and Connecticut.

Recreational cannabis sales were legalized in Massachusetts in a November 2016 ballot initiative, but the first retail store did not open until two years later.

Mellion said MassPack, as his organization is often called, is “sort of agnostic on cannabis,” but he argues that package store owners should be allowed to enter the cannabis market if they would like to. However, the two should not be sold in the same physical location.

“It is our view that a package store owner who has been in a multigenerational business should be allowed a cannabis license if they choose,” Mellion said, adding that state law does not forbid it. “In Massachusetts, alcohol and cannabis cannot be commingled and we agree … But we want to make it very clear that somebody who owns a Section 15 license should not be barred by a local municipality from selling cannabis in a second location.”

Now back to alcohol delivery. Two of Plaza’s competitors in Great Barrington told The Edge they were not interested in starting consumer delivery services at this time.

Joe Domaney of Domaney’s Liquors told The Edge his store does deliver for weddings and other events, “but in terms of house calls, we just don’t have that available.” Domaney’s does not have plans to deliver to consumers, “but you never say never,” Domaney added.

Joe Smegal, who owns Cellarbration, a package store inside the Big Y, said he did not think it would be worth his while to deliver to consumers. As is the case with Domaney’s, Smegal has made deliveries for weddings and the like, but has no plans to expand that service.

“There really is not enough volume,” Smegal said. “The population density here is not like it is in the city. For the amount of effort, it’s just not worth it.”

The residents and visitors to Great Barrington and the surrounding area enjoy the outdoors and most would be happy to come to his store and pick up a few things from Big Y anyway, Smegal surmised.

During his Edge interview on Tuesday morning, Mellion was on his way to the state Supreme Judicial Court in Boston, where the Massachusetts Package Store Association was an amicus party to Total Wine v. the Massachusetts Alcoholic Beverages Control Commission.

Total Wine, a large nationwide chain of liquor stores, is challenging sanctions issued by the ABC against two of its stores for selling items below cost, or what Mellion called “offering an illegal discount to consumers.” In Massachusetts, retailers may not sell alcohol at a price lower than what they paid the wholesaler.

Meanwhile, as we finished our interview, this reporter received a Google news alert linking to a story with the headline: “Massachusetts ranks highest in U.S. for underage drinking.”

It was a sobering reminder, so to speak, of the popularity among young people of America’s favorite drug. According to research analyzed by the American Addiction Centers, among people ages 12-20 in Massachusetts, nearly 29 percent had consumed alcohol and 20 percent had participated in binge drinking. And indeed, four of the five top states for underage alcohol consumption in the U.S. are in the Northeast. Click here to read the original study of all 50 states by the Oxford Treatment Center.

There was no indication why the Bay State is such a risky place for teens and alcohol. We can only guess, but surely it would be too easy to blame it on the weather.