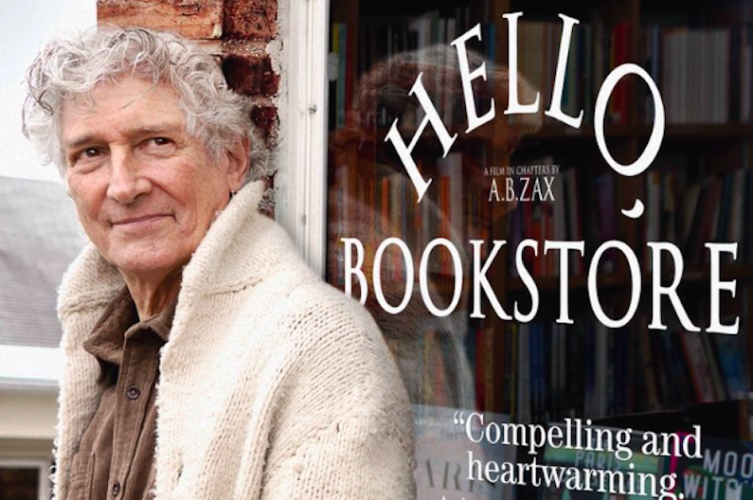 "Hello, Bookstore" will screen at the Triplex May 13–19, and at The Crandell June 10 and 12. Filmmaker A.B. Zax and bookseller Matthew Tannenbaum will attend the May 19 and both June showings to take audience questions. Image courtesy the film's website

The new film “Hello, Bookstore,” an intimate look at the interior approach to bookselling at Lenox’s Housatonic Street mainstay The Bookstore, premiered at last year’s Berkshire International Film Festival, and is currently playing at the Film Forum in New York City. It will be making its way back to us shortly, with showings at the Triplex from May 13–19, and at The Crandell on June 10 and 12. Filmmaker A.B. Zax and bookseller Matthew Tannenbaum will be on hand on May 19 in Great Barrington and for both showings in Chatham, to take audience questions after each screening.

Tannenbaum purchased his business when he was a young man fresh out of his Navy service, just before his 30th birthday, and has been at the helm ever since. Over the past 46 years he’s grown a fan base in the community and beyond thanks to his personal and non-commercial approach to his work, organizing books so as to encourage questions instead of solitary browsing, providing quiet, unexpected reading nooks, and integrating his merchant’s counter into the rest of the store, rather than separating it. Book browsers these sunny spring days can enjoy their purchases, along with a glass of wine from Tannenbaum’s next door wine bar, Get Lit, at an outdoor table.

“Hello Bookstore” is filmmaker Zax’s first feature, which he was inspired to undertake based on visits to the store with his wife, who’s from Stockbridge. “The first time I walked in, it was like stepping into a magical world. I hadn’t ever felt that in a bookstore. It just felt so personal, so charismatic. Over the years I’ve become friendly with Matt, just watching the way that he runs the store and connects with people. I was captivated sitting there. One day, I just felt, ‘This is a movie.’ I wanted to celebrate that atmosphere.”

He began filming in 2019 and completed the film in time for the shortened 2021 BIFF festival last fall, though the movie wound up nothing as he’d envisioned it. “The original intention was to craft a portrait of Matt in the store through the seasons.” Two seasons proceeded like any other two seasons. But when the pandemic hit, and the bookstore was forced to close, he soon found himself covering a crisis. In August 2020, four months into the shutdown of his store, Tannenbaum started a GoFundMe campaign to help keep it afloat. His appeal included a heartfelt message to his customers: “We belong to each other, you and I … In the old days I might have sold books to your parents or grandparents. Today I’m selling them, curbside, to you, to your children and grandchildren. But if I want to continue, and if you want me to continue, I am going to need your help. The challenge is real and it is immediate … Until we can safely open our doors again, and I just don’t know when that will be, I most humbly ask you to help me get through.”

His ask hit an unexpected nerve. He’d set an original fundraising goal of $60,000, but quickly surpassed that amount. To date he’s more than doubled it. (The most recent donation came in just four months ago.)

Viewers of the film, said Zax, use words like “soothing” to describe it, like a bowl of warm chicken soup. An antidote to the times we live in, infused with a tone that reflects the slowed-down, interior world we inhabited for a bit, when our interactive sense of community collapsed nearly overnight. It zeroes in with great specificity on a man and his store, and also pans out to show us, through him, and it, what we value. “It brought all these ideas and themes to the surface, about community, about supporting these places that are so important to us, and the worth of a bookstore.”

Added Tannenbaum, “What we seem to offer is something a little different … It invites a kind of browse that people have remarked over. It’s geared toward conversation. The motto in book selling is, ‘Stack them high, and watch ‘em fly.’ I just think that is so distasteful, all about the commerce. I’m about the connection of the offerings that the publishers and the authors, the writers and the editors, have given us. So the chairs around the front desk, and in other parts of the store, allow for a kind of community within the community.”

Zax said his experience tracing The Bookstore’s trajectory through the pandemic crystallized certain profound revelations about our compulsion to tell one another stories. “It illuminated for me that the bookstore is this primal thing that we need as human beings. It’s a continuation of sharing stories in the caves to the castles, where the Bards would come in and share stories to the peddlers going through villages. [Matt] is a storyteller.”