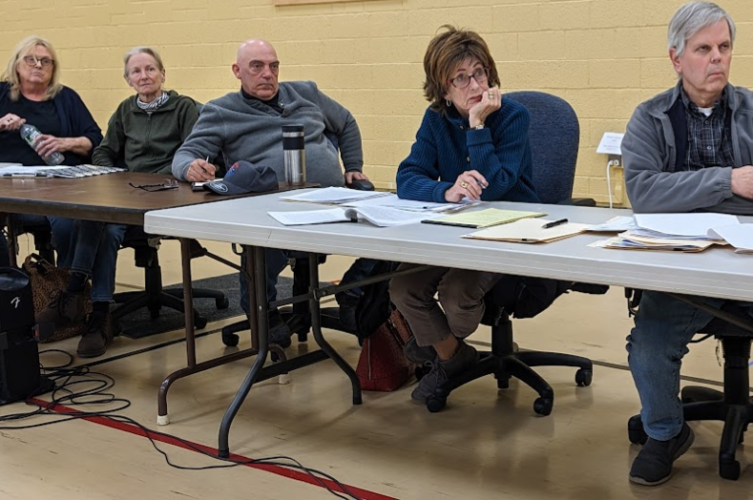 Members of the West Stockbridge Planning Board listen to one of the speakers at the third public hearing about The Foundry’s application for a special permit on Monday, Nov. 21. From left: Chairperson Dana Bixby, alternate member Sarah Thorne, along with members Andrew Fudge, Susan Coxon, and Gunnar Gudmundson. Photo by Shaw Israel Izikson.

West Stockbridge — The third public hearing on The Foundry’s application for a special permit lasted for more than three hours on Monday, November 21. By the time the hearing ended around 10 p.m., it seemed as if Foundry owner Amy Brentano was not close at all to resolving any of the issues surrounding the special permit application with members of the Planning Board or Truc Nguyen, co-owner of the neighboring restaurant Truc’s Orient Express.

As it was at the previous hearings on November 1 and November 7, the issues all came down to the sounds emitted from Brentano’s performing arts venue and how it affects Nguyen and her family, which is approximately 50 to 60 feet away from The Foundry building at 2 Harris Street.

But other issues were thrown into the mix during the hearing, including issues surrounding race and colonialism. From the very beginning of the meeting, Planning Board Chairperson Dana Bixby was criticized for the handling of the public hearing process. “Your meetings have gone on and on and been contentious,” resident Abby Pratt told Bixby from the audience.

Pratt was not recognized by Bixby to speak, and Bixby went on to talk about a letter submitted by the Lee-based Multicultural Bridge organization to the board. “I don’t know how [the organization] works, their paradigms or their underlying thinking,” Bixby said. “What a friend told me is that there’s a colonialism underlying what goes on here. Truc’s family came from Vietnam. It’s a product of colonialism. The statement as I understand it here in [Multicultural Bridge’s] letter is about some implicit colonialism. That’s a generalized term that may not be felt to be applicable here. But what we do here is zoning, and the zoning board is not a mediator.”

Bixby went on to say that “the thing about zoning is that zoning itself is a product of colonialism. It’s a product of the effort in the late 19th century and early 20th century to create separation. So the simple-minded version of zoning is creating a separation of uses between, say, factories and where people live. But it also fundamentally creates separation between people.”

Bixby did not read into the record Multicultural Bridge’s letter at the beginning of the meeting, but towards the end of the meeting organization representative Karen Clark read parts of the letter co-signed by her, organization co-founder and CEO Gwendolyn VanSant, and board member Jeff Lowenstein. “[The organization] is here in solidarity today with Truc, a minoritized restaurant owner of 40 years and West Stockbridge resident,” Clark said. “Tonight you have the opportunity to help remedy a situation with significant racial justice implications that have been playing on for over two years. After the past two years, Truc, her family, and her business have been suffering as the town’s rules have not been enforced. We understand that Truc called and emailed the town many times to complain about these infractions and that she was repeatedly told that there was nothing the town could do.”

Clark said that “[Truc] has shared recently that one of the hardest parts of this ordeal for her is that she has felt unheard.” Clark continued, “The Planning Board can take significant steps to change that. We also urge you to explore the issues in front of you with a racial justice lens. How are the town’s zoning rules and their enforcement, or lack thereof, impacting these two businesses? What do accountability and repair look like in this situation? We also encourage everyone here tonight and the town as a whole to review and reflect on the events that created this situation. How have town policies and their enforcement helped create this situation or failed to mitigate it? What does this story tell us about whose voices get prioritized? What can we do to repair the situation as a community, as a whole community?”

Towards the beginning of the hearing, Brentano introduced Ian Stewart of Great Barrington, a professional sound engineer that she hired to do an acoustical analysis of the building.

“The main measurements that we were interested in taking, first and foremost, was the ambient sound level at the property level—at the property line of The Foundry,” Stewart said.

Stewart said that the sound inside The Foundry was measured at 90 to 100 decibels. “We used music that is honestly probably kind of heavier and more aggressive and loud than what would typically be played at The Foundry,” Stewart said. “There is a lot of heavy drums and heavy bass in the song, and we set it to a level that was judged as loud as would typically be played in there for programming.”

Stewart said that during the playback of the song that “predominantly it’s the bass that’s coming through [the building] and the fact that the building is attenuating [the sound] by about 30 decibels is pretty substantial.”

However, members of the Planning Board were critical of Stewart for the duration of time he spent conducting the sound test. “I was out there for about a minute for each section of outside the building,” Stewart said. “I think part of this was that we didn’t want to play the music loud on a Sunday morning for half an hour. We’re trying to be respectful of everyone that’s here, the fact that there are parties that are unhappy.”

Bixby said that Stewart’s sound study “isn’t adequate for our purposes here.” She proposed, “Perhaps it’s something where we could set up and you can do it over a longer period of time.”

Planning Board member Gunnar Gudmundson was also critical of Stewart’s study. “What you’ve done is you’ve played music at a level that was quiet enough to not make it too loud outside,” Gudmundson said. “At the end of the day, there will be a sound level established that’s a maximum level at the property line. Honestly, I don’t think anybody cares what you do inside the building, as long as that sound level isn’t exceeded at the property line. How you accomplish that is not necessarily our concern. But all you’ve done is prove that if you play music quietly enough in the building, it’s quiet enough outside the building.”

Brentano defended Stewart’s sound study to the Planning Board. “I am there [at The Foundry] measuring sound when we have performances and I asked this sound engineer to go above and beyond what we would ever do in this space,” Brentano said. “We have a very intimate performance space. My intention is never to blow anyone’s ears out. Sometimes we have on occasion, less than a fifth of our programming actually, bands [that] used our subwoofer which produces that kind of [bass] sound. It’s on a rare occasion and it has never been for back-to-back performances. I said to [Stewart] can you push it beyond [typical performance] decibels because I want to see the worst possible case scenario.”

An unidentified member of the audience accused Brentano of “hiring your friend” to conduct the sound study.

“You know what, I’m the only person that’s hired somebody to come here,” Brentano said. “I feel like there needs to be more control of this meeting. I have taken 100 percent abuse for three hearings here.” Another unidentified member of the audience proceeded to yell “she’s a white person and [Truc] is a person of color! Would anyone acknowledge that?”

“Where is the police?” Brentano said in response. “This is my application hearing. I have made the best effort to comply with the complaints that are coming from one abutter. I chose to hire someone who’s not a friend, but whom I know is a professional. When Ian came on Sunday, I paid and I’m paying for him now to stand here. None of these other people have come into the venue to hear what the sound level is.”

Later on during the hearing, Chairperson Bixby canvassed the members of the board to ask them about their thoughts on the information presented over the last three hearings. “I think it’s very simple, there needs to be more soundproofing in the building and I don’t think it should be heard from the outside,” board member Susan Coxon said. “There can be a little bit of noise as you’re walking by, but Amy needs more soundproofing [similar to] a recording studio where you need to have padding. I think she’s done a job of trying to do some, but I think she needs something that’s stronger. And as far as parking, I don’t care about the parking. If we get this noise problem solved [there] wouldn’t be a problem with parking.”

“Without further testing for the ambient levels, basically we’re gonna go nowhere,” board member Andrew Fudge said. “We need to know what the ambient levels are, even if [testing] is done over a 24-hour period. You can’t just say ‘well, I was out there for an hour and messed around and just came up with this level.’ That’s not accurate enough.”

Alternate member Sarah Thorne agreed with Coxon and Fudge. “It’s all about the sound,” Thorne said. “I think that the ambient [sound] levels need to be taken over a 24-hour period over days. It seems to me that they selected the quietest time they could find, and the loudest music they could find, and then they did their testing.”

After three hours, the board unanimously voted to continue the hearing for the fourth time on Monday, November 28 at 7 p.m.