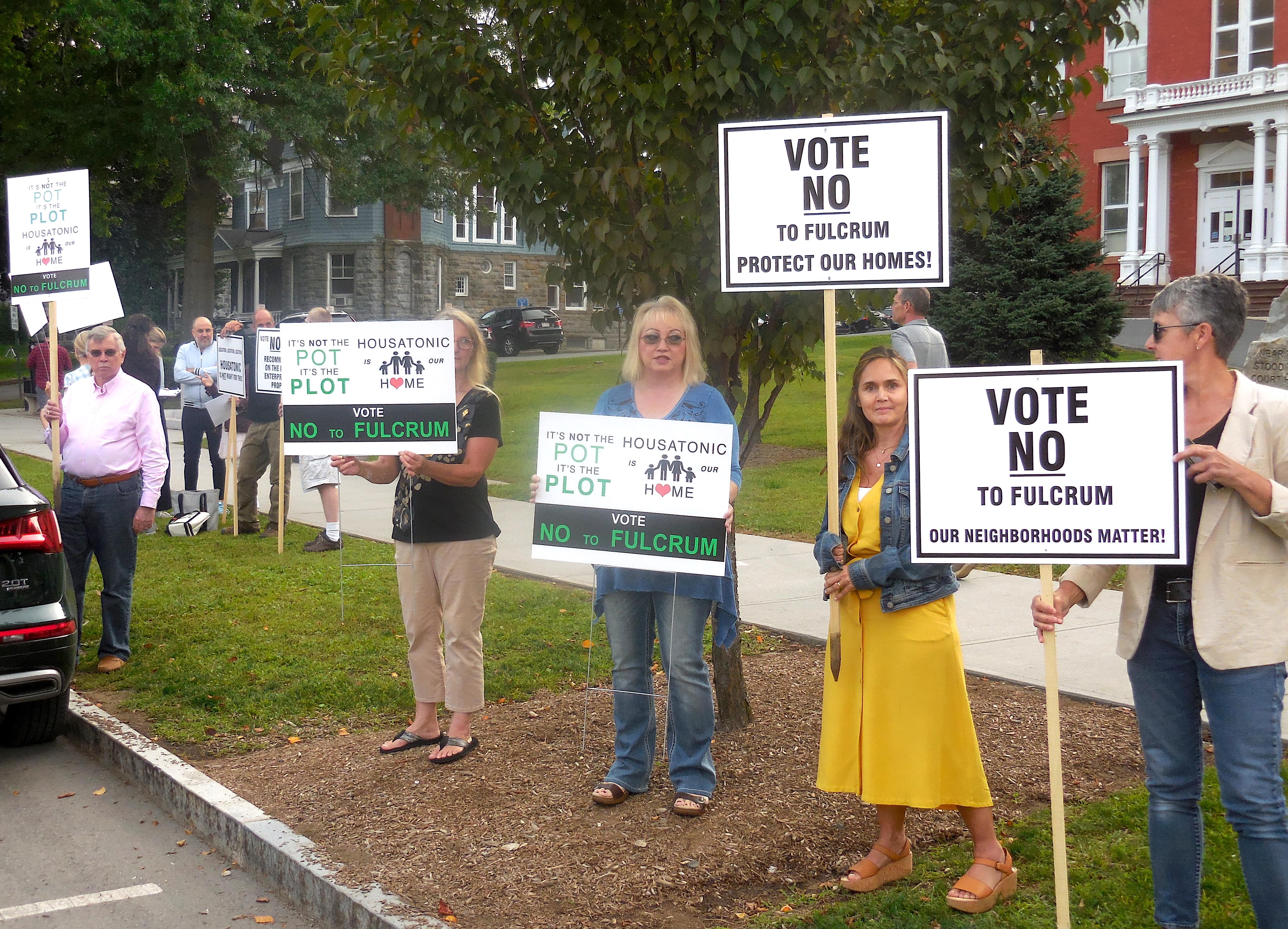 In front of Town Hall, town residents protest the Fulcrum proposal before the board of health hearing Thursday night. Photo: Terry Cowgill

Editor’s note: this story has been corrected to reflect the fact that the planning board vote, at 5-0, was unanimous.

Great Barrington — A controversial proposal for a cannabis cultivation and manufacturing facility on VanDeusenville Road encountered official opposition Thursday night as the Board of Health declined to endorse a special permit for Fulcrum Enterprises.

In declining to recommend the permit to the selectboard, which will consider it on Monday night, the health board said it needed more information on noise, odor and possible effects on groundwater. After a marathon session last month, the planning board voted 5-0 to endorse the special permit after approving Fulcrum’s site plan and visiting the site itself.

Fulcrum attorney Kate McCormick told the health board that there are no “jurisdictional” issues that should concern the board. The board would have jurisdiction over the septic system at the site but that plan will be engineered later and will comply fully with Title 5, the state law governing the installation, use and maintenance of septic systems.

The health board would have jurisdiction over water wells but not at this site. There will be no well dug for water since it will be provided by Housatonic Water Works, the private water company that serves that area of town. The operation is expected to use up to 2 million gallons per year, an amount that Housatonic Water Works treasurer Jim Mercer said his company could easily handle.

See video below of the board of health meeting with representatives of Fulcrum Enterprises Thursday night. Fast forward to 35:00 to see comments from the audience:

McCormick acknowledged that the board had the authority to pass bylaws regulating cannabis facilities as allowed by Massachusetts General Law, but it had not yet done so.

“We are requesting a positive recommendation; we feel there are no jurisdictional items other than a subsurface septic system,” McCormick told the board. “Under Mass General Law, the board of health can regulate some items, but it gives you the authority to create a bylaw for regulation. But at this point, there is no regulation other than septic, so it’s our position that it’s nonjurisdictional and we’re requesting a statement be sent to selectboard that states it’s nonjurisdictional.”

But health board Chairman Michael Lanoue disagreed that his board had no jurisdiction. He cited a section of state law — click here to read it — that allows boards of health to consider “noisome and injurious odors,” among other things. For about six weeks when the cannabis plants are flowering, they emit a foul odor that has been likened to that of a “dead skunk.” Click here to read a special report on the odor problem in the Cannabis Business Times.

Both Fulcrum and the town have retained odor mitigation experts. Fulcrum has hired NCM, which plans to use a biodegradable botanical oil known as SL-4000. The oil will be diluted with water at a ratio of 1,000 to 1. The mixture is sprayed as a mist. As fans pull the air out of greenhouses, the mixture will become “atomized into it” and “neutralize” the odor, according to Sarah Gapinski, a civil engineer from SK Design hired by Fulcrum.

The issue of noise was also raised during the site plan meeting with the planning board. Fulcrum has since hired a noise expert, who said the noise emitted by the 27 exhaust fans in the 15 greenhouses would be well within the limits imposed by the town’s noise ordinance, Gapinski said. All 27 fans would rarely ever run all at the same time.

The town will likely hire its own noise expert as well. McCormick characterized those two hires by the town as “peer reviewers” who would conduct studies independent of the conclusions of Fulcrum’s own experts.

Fulcrum has signed a purchase-and-sales agreement to buy 5.78 undeveloped acres from the Nolan family at 22 Van Deusenville Road to construct and operate the facility.

The property, which includes a farmhouse, is zoned industrial, so the use is allowed by special permit from the selectboard. Fulcrum has applications for cultivation and manufacturing licenses pending before the state Cannabis Control Commission.

Much of the property surrounding the site is zoned residential, but there is also a lot of industrial activity nearby, including an abutting solar-power array, a stone removal operation and a large junkyard known as the Formel Motor Company.

In addition, there are several homes nearby. About 20 town residents, most of them with property near the site, demonstrated in front of Town Hall before the health board meeting. They held signs that urged town officials to “vote no to Fulcrum” and asserted that “our neighborhoods matter” and “it’s not the pot; it’s the plot.”

Then they entered Town Hall and aired their concerns, as they did last month and at a community input forum in May. Two families, the Louberts and the Forbeses, had lawyered up.

Mitchell I. Greenwald, a Pittsfield attorney representing those two families, referred back to the section of Massachusetts General Law that allows boards of health to consider “noisome and injurious odors.” He declared that state law “is absolutely part of the task and absolutely creates jurisdiction.”

“You have the power to require a particular location or prohibit the use altogether,” Greenwald said. “So that’s part of your task, and according to the statute, you have to do that after a public hearing is held, as if it were a zoning hearing, with notice to abutters, publication, the whole thing. So our position is that needs to happen.”

Greenwald urged the board to pursue that path independent of its recommendation to the selectboard.

The concerns of residents ranged from the aforementioned noise and odors to the effect of the Fulcrum project on property values. One even questioned who would get preference from Housatonic Water Works in the event of a drought: Fulcrum’s pot plants or HWW’s 1,000 other customers?

Board member Ruby Chang, who is also a physician, had concerns about the diluted odor-reduction solution landing on the ground and its longterm effect on groundwater. McCormick and Gapinski said SL-4000 is biodegradable and that any excess would filter through soils to be cleaned in the same manner as gray water does in a septic system’s leaching fields.

In the end, the board voted unanimously not to take action on the permit because of a lack of information. The selectboard meets Monday night at 7 p.m. in Town Hall to hold a public hearing on the special permit, with a possible vote afterward.

Also on the agenda will be a continuation of a discussion of a host community agreement with Fulcrum. Typically those agreements include a community impact fee paid by the applicant and a local-option sales tax of up to 3 percent to help cover the costs of hosting a cannabis retailer or manufacturer.

Great Barrington is the site of Berkshire County’s first recreational cannabis store, Theory Wellness, with five others in the permitting stage. The town has gained a reputation as cannabis-friendly, which Fulcrum developer John Heck has said is one of the reasons his company chose Great Barrington. The town’s cannabis reputation has even attracted the attention of Crane’s New York Business, which published a story on the subject in May.