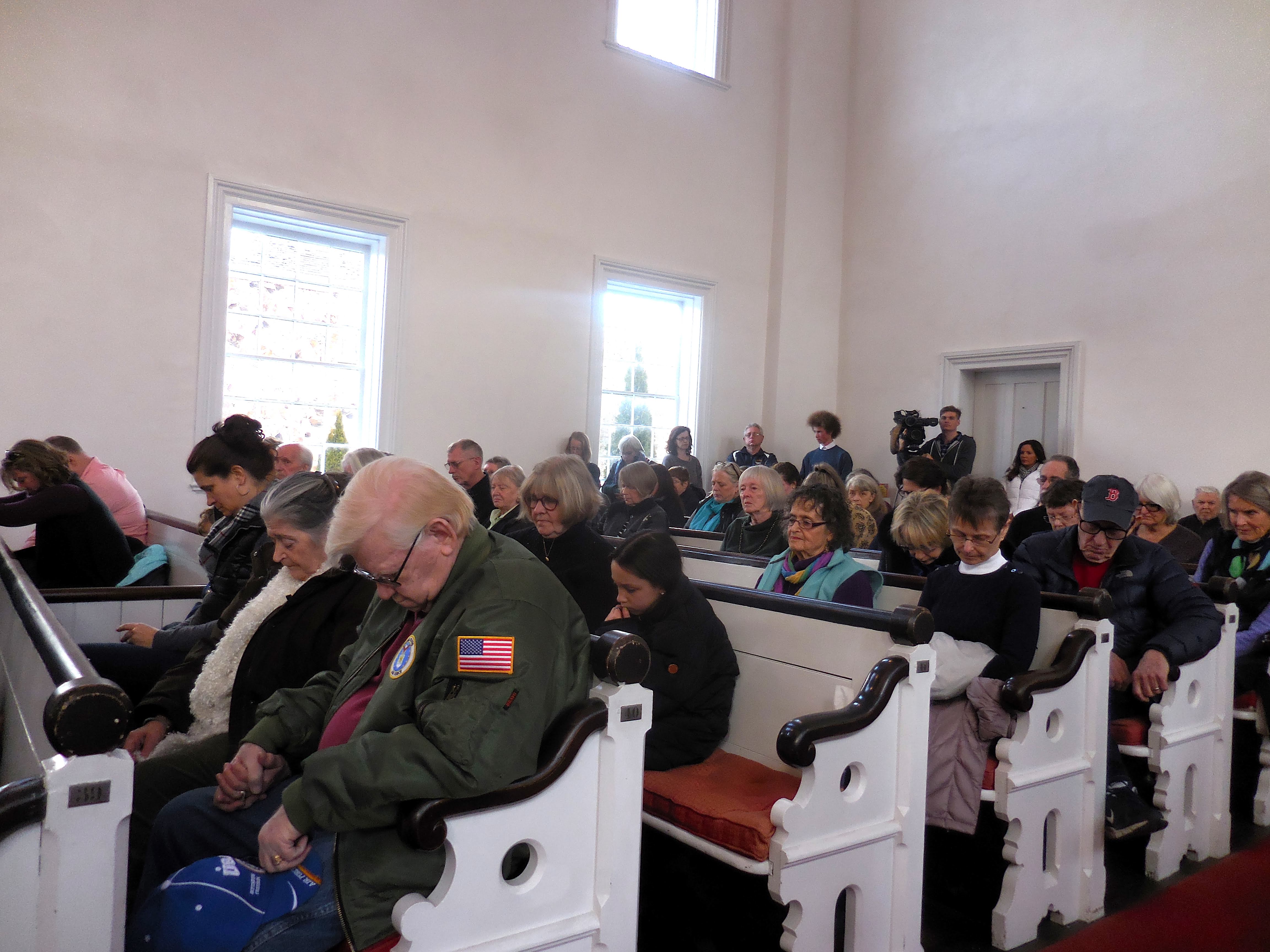 Sheffield residents bow their heads in prayer during a healing service Saturday at the Old Parish Church. Photo: Terry Cowgill

Sheffield —They came from all over town and beyond to engage in a ritual of grieving and healing.

The town of Sheffield has been rocked by the deaths of six of its sons and daughters in as many days. Last weekend, Sheffield native Samya Stumo, 24, and a 2010 graduate of Mount Everett Regional School, died as a result of the crash of Ethiopian Airlines Flight 302 near the town of Bishoftu, Ethiopia.

On Wednesday morning, a family of five was found dead inside their new house on Home Road. Authorities are investigating the ghastly incident as a murder-suicide. In addition, on Feb. 28, Jesus A. Santos, 19 and a graduate of Mount Everett Regional School living in Lakeville, Conn., died in a single-car crash on Berkshire School Road.

The murder on Friday of 50 praying Muslims in Christchurch, New Zealand, and renewed violence in the Middle East also weighed heavily on the minds of the 75 people who attended Saturday’s interfaith prayer service and potluck supper and “healing meal” at the Old Parish Church on Main Street.

“We gather because this week has been too much to bear,” said Rev. Erik Karas, of Christ Trinity Church, and one of the organizers. “Regardless of the circumstances of these events both near and far, these horrors have left families, friends, and neighbors in our world stunned and in shock.”

See video below of the interfaith prayer service and supper at the Old Parish Church:

Graham and Karas called up other area spiritual leaders in attendance, including Rabbi Neil Hirsch of Hevreh in Great Barrington, to pray in the tradition of their own faiths. Trudy and John Miller led the audience in a moving rendition of “Angel Band,” a 19th century gospel hymn.

Graham read a statement she had received from Samya Stumo’s parents, Nadia Milleron and Michael Stumo:

“We are not ready to speak with the media. We are focused on trying to get details about our daughter. Samya was a deeply private person. We hope that all concerned will respect her privacy.

“As a person, Samya was a fearless, radiant spirit who inspired others to live brightly and fully. Professionally, Samya was ambitious and passionate about revolutionizing global health.

“She cared most about treating all people and patients as human beings, particularly in the context of their culture, family, and individuality. She advocated for health care to be human-centered, rejecting the status quo in global health development.”

The tragedies of last week have hit this town like a ton of bricks. Dennis Sears, who chairs the Sheffield Historical Commission and represents the town on the Southern Berkshire Regional School Committee, told The Edge:

“I hope this will help us all move forward.  In spite of being around a long time and awareness and involvement in a lot of tragedies, today is the first time I’ve stood crying with people at the transfer station.”