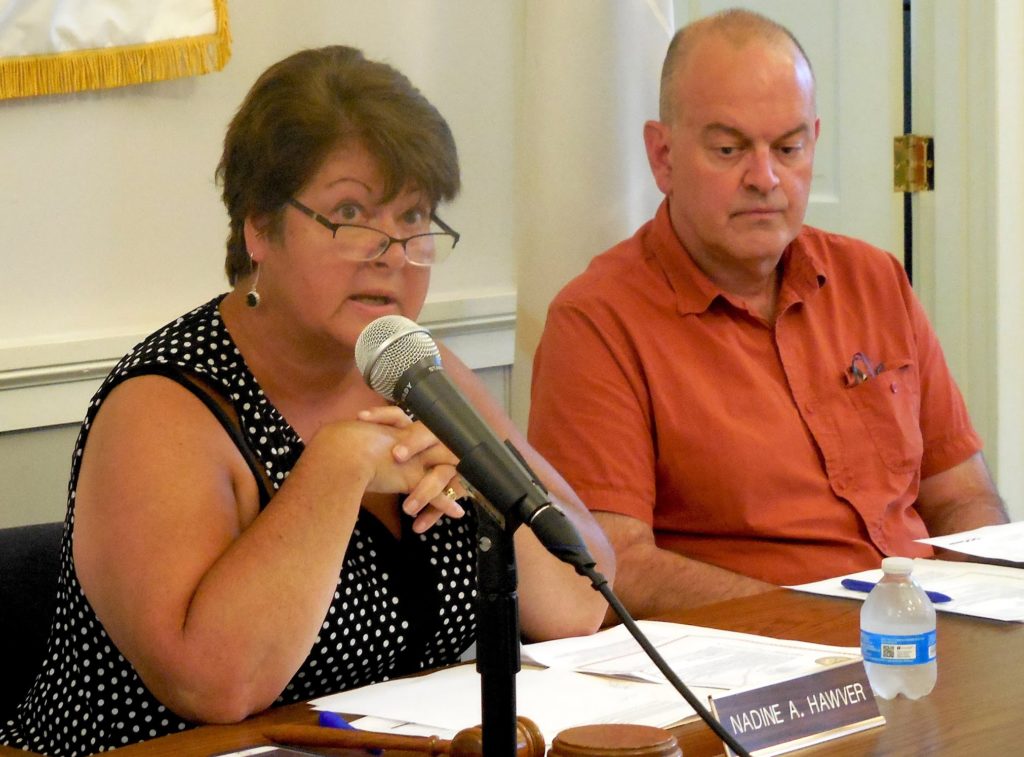 Sheffield Selectman Nadine Hawver, left, at a meeting of the board of selectmen at Town Hall in June 2019. To her left is fellow board member Martin Mitsoff. Photo: Terry Cowgill

Sheffield — Nadine Hawver has seen a lot in her six years on the town’s board of selectmen: the Dollar General lawsuit; the decision to place the town treasurer and tax collector on administrative leave; and a glaring regional school district error in how it determined the amount the town of Sheffield would have to contribute to the Southern Berkshire Regional School District.

Now a global pandemic has forced an emergency response and changed the way the town does business. And while Sheffield remains in solid shape financially, the COVID-19 public health crisis will likely inflict profound fiscal pain on towns in the future.

As state Sen. Adam Hinds, D-Pittsfield, wrote last week in the Boston Globe, “At exactly the moment Massachusetts will try to get the economy moving again, probably this summer, the state and local governments could be contracting their budgets under the weight of plummeting revenue and colossal COVID-19 related costs.”

Hawver is seeking a third three-year term on the board but is facing a challenge from Sheffield dairy farmer Bob Kilmer. She sees the current board, which, in addition to her, consists of newcomer Martin Mitsoff and veteran Rene Wood, as an effective group.

“I’m happy with the way things are going and it’s a very productive board,” Hawver said in a recent Edge interview. “We’re three individuals with very different backgrounds but we work well together.”

Hawver has chaired the board for two of her six years and acted as clerk (also known as vice chair), for the other four years. Wood currently chairs the board. When Hawver first came on board, her first task was to resolve the Dollar General lawsuit, in which the town was sued by parent company Primax Properties over its actions in trying to stop construction of the store that now sits on Route 7 just north of downtown. Obviously, that goal was accomplished.

“I also wanted to make sure town boards were operating ethically and complying with open meeting laws restrictions,” Hawver explained. “All members need to be apprised of what their obligations and responsibilities are.” So Hawver set about writing a board and committee handbook. Done.

Another priority is controlling the tax rate. Much of that is driven by increases in the school district budget over which the town has little control. Sheffield pays between 52% and 53% of the local costs of the assessments charged to the five member towns to fund the district’s budget, which, this year, is proposed to be almost $17.5 million. Education spending accounts for three-quarters of the town budget.

Further aggravating the town’s relationship with the school district was a mistake five years ago in the amount assessed to some of its member towns. Because of a disastrous clerical error, the school district’s assessments approved by the five district towns at their May 2015 annual meetings had been incorrect, with Alford, Monterey, New Marlborough and Egremont being overcharged while Sheffield’s assessment was less than it should have been by almost $240,000. That means the town was on the hook for far more than it had budgeted and approved.

Hawver, who jokingly described herself in a conversation with a reporter as a “pit bull,” wrote a widely distributed and strongly worded letter to the editor complaining about how the district handled the error. The letter, which was co-signed by then-selectmen David Smith and Andy Petersen, further branded the school committee as having “very weak leadership” and called for “dramatic changes” in the make-up of the committee.

“I’ve lived in Sheffield since I was 13 years old and it’s gotten to where the tax rate in Sheffield is extremely difficult, especially for people living on fixed incomes,” Hawver said, “and so my goal was to really watch the budget and ask the hard questions, not only of our town budget but of the school budget, which, in Sheffield, is 75% of our total town budget.”

As for her pit-bull reputation, Hawver said: “The voters don’t put you in place because they’re looking for somebody to be a cottonball. Taxpayers are paying a lot and my job as a selectman is just to make sure we’re getting the most bang for our buck, no matter whether it’s with education or equipment purchases or with hiring the right employees.”

Hawver noted that, in his Edge interview, Kilmer complained about a “lack of transparency” in the handling of the case of former treasurer and tax collector Michael Ovitt, who was placed on administrative leave in 2018 and who subsequently signed a nondisclosure agreement with the town.

Personnel issues are complicated, she explained, and have to be handled with great care so as not to invite litigation or unduly damage someone’s reputation. Hawver noted that in his run for the board last year, Mitsoff also complained about a lack of transparency but no longer does.

Hawver was a commercial banker for 23 years and, after retirement, ran a bed and breakfast in Sheffield with her late husband, Cliff. She now runs her own tax preparation business out of her Park Lane home. As a businessperson herself, Hawver cites new business development in town, including several cannabis retailers such as the Pass and Nova.

In response to the COVID-19 crisis, the selectmen in mid-March called an emergency meeting of department heads, including the fire chief, police chief, board of health and the selectmen.

“We immediately declared a state of emergency so that we were eligible for aid from FEMA or MEMA,” Hawver said.

“The board has worked amazingly well during the crisis. We’ve kept the senior transportation system going. We felt it was vital for our seniors to get to the grocery store and to their doctors. We’ve now opened that up to surrounding towns. We know that Southern Berkshire Elderly Transportation has closed down for the time being. We are still providing those much-needed van services.”

Town boards and commissions continue to meet as needed via phone conference. Gov. Baker has deemed government employees as essential, so the town’s workers soldier on, though the senior center, Town Hall and library have been closed to the public — and there is a dropbox at Town Hall.

Information about the Monday, May 11, election can be found on the webpage of town clerk Felecie Joyce. Polls will be open at the senior center with reduced hours (9 a.m. to 7 p.m.) but absentee ballot request forms were mailed earlier to all registered voters in order to facilitate remote voting and be consistent with the state’s social distancing guidelines. All registered voters may vote by absentee ballot because of the COVID-19 pandemic.

No date has been set yet for the annual town meeting, which usually takes place this month. Hawver said the town is waiting for more information from the state. Setting annual town meeting dates requires two weeks’ notice to voters, but if social distancing guidelines continue to make an annual town meeting impractical before the fiscal year concludes at the end of June, the selectmen can pass monthly budgets until a town meeting can be held.

“As we all know, it’s always up to the voters, and I will be honored and pleased to serve another three years should the voters choose me,” Hawver said. “And if they choose Mr. Kilmer, I wish him the very best.”