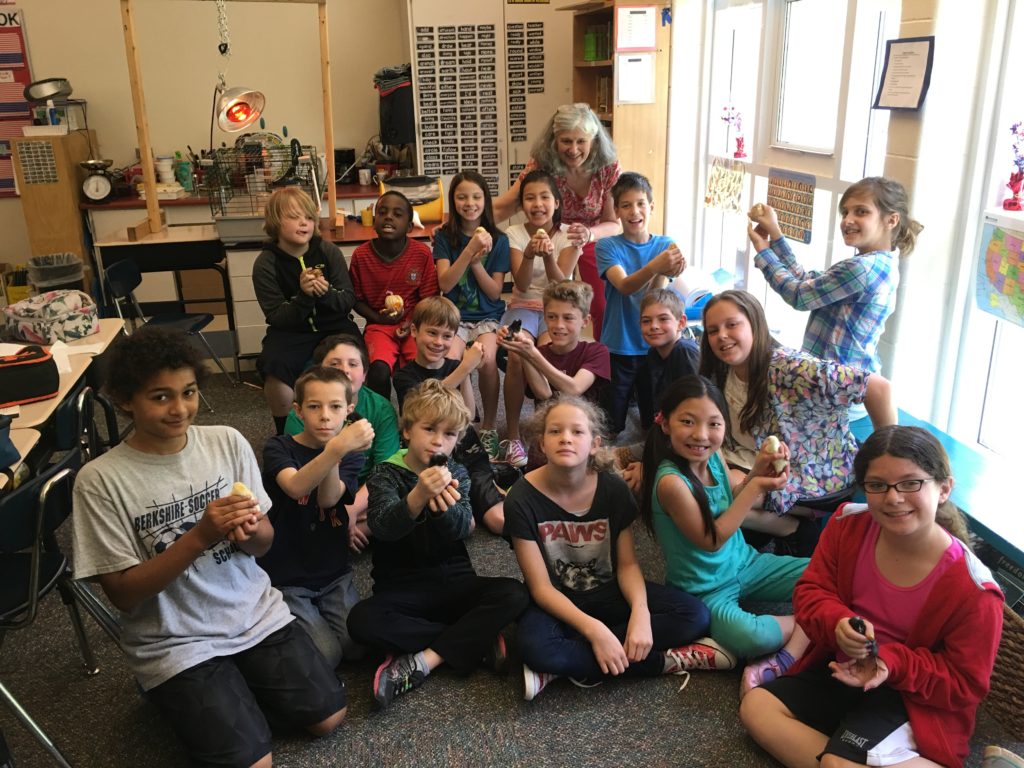 David Scribner
The students in Susan Ebitz's fourth grade class at Muddy Brook Elementary School hold the chicks that just hatched in their classroom, as part of the curriculum unit studying embryology and animal adaptation.

Great Barrington – It was hatching day at Muddy Brook Regional Elementary School. And if you listened carefully from the school hallways, you could hear sounds that you wouldn’t expect – soft and tentative — coming from the third floor fourth-grade classrooms: the first peeping of chicks – white Leghorns, Rhode Island reds, black Australorps — newly hatched from their portable brooders, and now scurrying about in their  little cages, warmed by amber heat lamps.

For 21 days, the 70 students in the three fourth grades, plus the students in one first grade and in one kindergarten class, had been anticipating this moment when the eggs they had been tending in their classroom in portable brooders – and studying and naming – would hatch. Each of the 35 eggs had a number on it, assigned to a pair of the students. 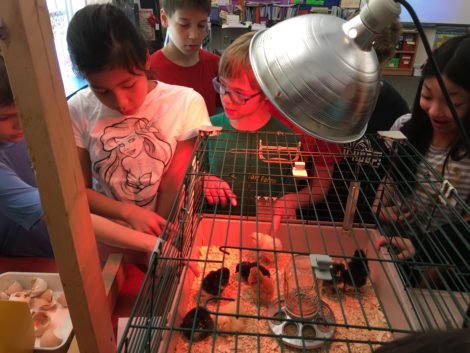 Students gather around the cage to watch the chicks.

For fourth graders, witnessing this emergence of new life was a component of the curriculum’s embryology unit and the study of animal adaptation, but it was also a natural outgrowth of the Yolk Project, organized by fourth grade teacher Susan Ebitz who raises chickens – 150 of them — on her farm in Otis — a “hobby farm,” she calls it.

A very productive hobby, indeed. Each Friday morning at 7:45, she and a few of her students are at the desk at the entrance to offer eggs for sale to students and parents arriving for the school day. And they sell a lot of eggs at $4 a dozen. The proceeds go to charities determined by a vote of the students. This year, the Yolk Project collected more than $2,000: half of it went to the People’s Pantry, the other half to a variety of good causes, including an allocation of $275 to send a young girl in Africa to school who would otherwise be unable to receive an education. 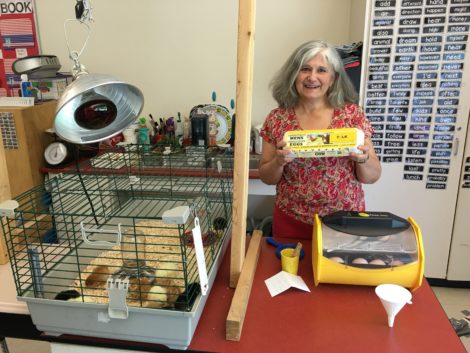 Fourth grade teacher Susan Ebitz with the paraphernalia of the Yolk Project.

“The motto of the Yolk Project,” explains Susan Ebitz, “is ‘Free Range Children: Changing the world one egg at a time.’ This is Massachusetts agriculture in the classroom. ”

“This is an educational opportunity,” she noted. “The students are studying the behavior of the baby chickens and doing a log. They work in pairs, keeping a journal, weighing their chick each day.” 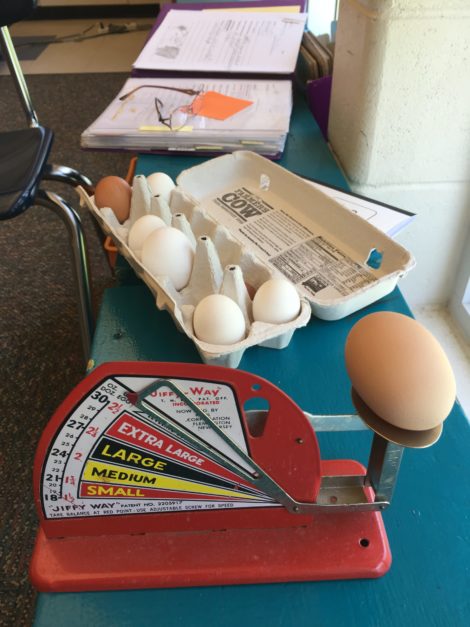 A scale and notebook, tools to keep track of the development of embryos in the eggs.

“It was so fascinating to students,” she added, “that one of my students, Gabrielle Hinds, wrote a story from the point of view of the embryo.”

And students aren’t the only ones at Muddy Brook who’ve become involved in the project. Assistant Principal Nan Thompson has an incubator in her office – for the second year – where she is awaiting the arrival of four ducklings, two mallards and two Muscovy ducks.

She withdraws a small flashlight from her desk drawer, carefully lifts a warm egg from the brooder, and with the bright light illuminates the veins and outline of an embryo within the egg.

“I donate them to Suky Werman at Stonover Farm in Lenox,” she says. 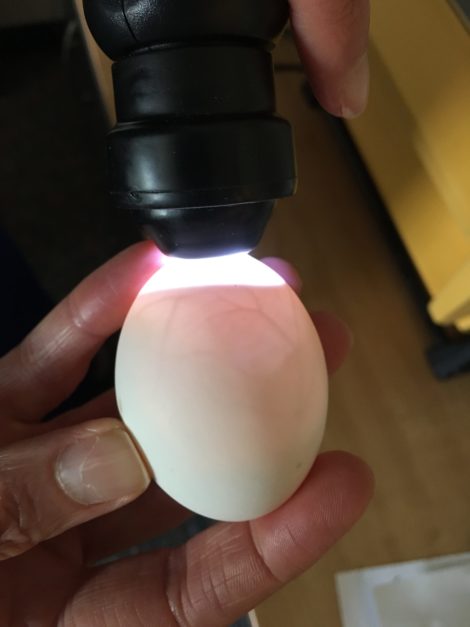 Except one. Last year, she kept one duckling, and flips through the photos on her iPhone to display a shot of her full-grown Muscovy lounging on a couch with her German shepherd.

In the meantime, the chickens that have hatched in the past several weeks in Muddy Brook classrooms are going to new homes. Some have been adopted by students’ families; the rest will join the flock at the Ebitz farm.

Next year, however, the Yolk Project will pass into new hands. Susan Ebitz is retiring, after a 35-year teaching career – well, she’s almost retiring.

“I’m committed to the Yolk Project,” she said. “I want us to keep on selling eggs, and raising money. So I’m going to help, and will come in on Fridays.”