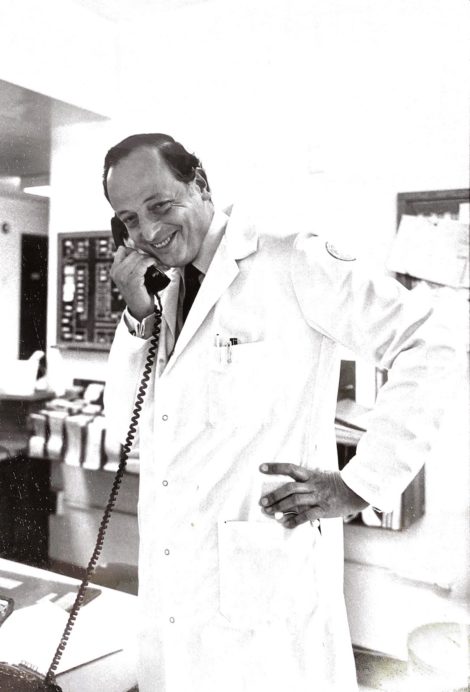 The family of Harvey Klein, MD, mourns his death on August 12, 2020, after a brief illness. His primary professional commitment was to the practice of internal medicine, in which he was engaged for 50 yours, retiring only a month ago. Born in 1937 to Emanuel and Rose Klein in the Bronx, N.Y., he grew up as the elder brother of David and Arnold. After graduating from the Fieldston School, he became an undergraduate at the University of Chicago, which he considered to be the best education he could possibly have gotten. He then attended Harvard Medical School, from which he graduated in 1963, and began his medical internship at the New York Hospital.

From 1965-1967, he and his wife Phyllis (Patti) lived in Minot, North Dakota, while he served as a Captain in the Strategic Air Command of the U.S. Air Force, treating members of the Air Force, veterans and Native Americans on a nearby reservation. He returned to the New York Hospital and in 1968-9 served as Chief Medical Resident. He was subsequently a gastroenterology fellow there.

In 1970, he began his 50-year internal medicine practice at the Cornell Medical College, where he instructed generations of medical residents in physical diagnosis and was widely regarded as a mentor. He cared deeply about the practice of medicine, with a focus on listening to and connecting personally with patients. He was the William S. Paley Professor of Clinical Medicine, a member of the Weill Cornell Medicine Board of Overseers and a recipient of the 2016 Maurice R. Greenberg Distinguished Service Award. He was a board member of the Music and Medicine Program at Weill Cornell Medicine. He was considered by his colleagues to be a giant presence, both literally and metaphorically. He was also a talented photographer who had an eye for engaging and beautiful images. He had a contagious sense of humor and loved to laugh. He also loved Gilbert and Sullivan lyrics, classic show tunes, opera and classical music. He cared deeply for his family, his many friends, his colleagues and his patients.

He and his family have spent summers and many holidays in Stockbridge, Mass., since the 1970’s, where he had many friends who enjoyed his love of conversation and his sense of humor. He leaves his wife, Phyllis (Patti), of 56 years, his children, Laura (John Branigan) and Daniel (Dr. Jennifer Breznay), and his four teenaged grandchildren – Julia, Josey, Molly and Max – with whom he loved to share stories.

A Zoom Memorial Service will be held on Sunday, August 23, 2020 at 11 a.m.  For those wishing to attend, please register by clicking here.  The family suggests that you log in 10-15 minutes prior to the start for a photo montage of Harvey — both photos of him and photos he has taken of others over the years.