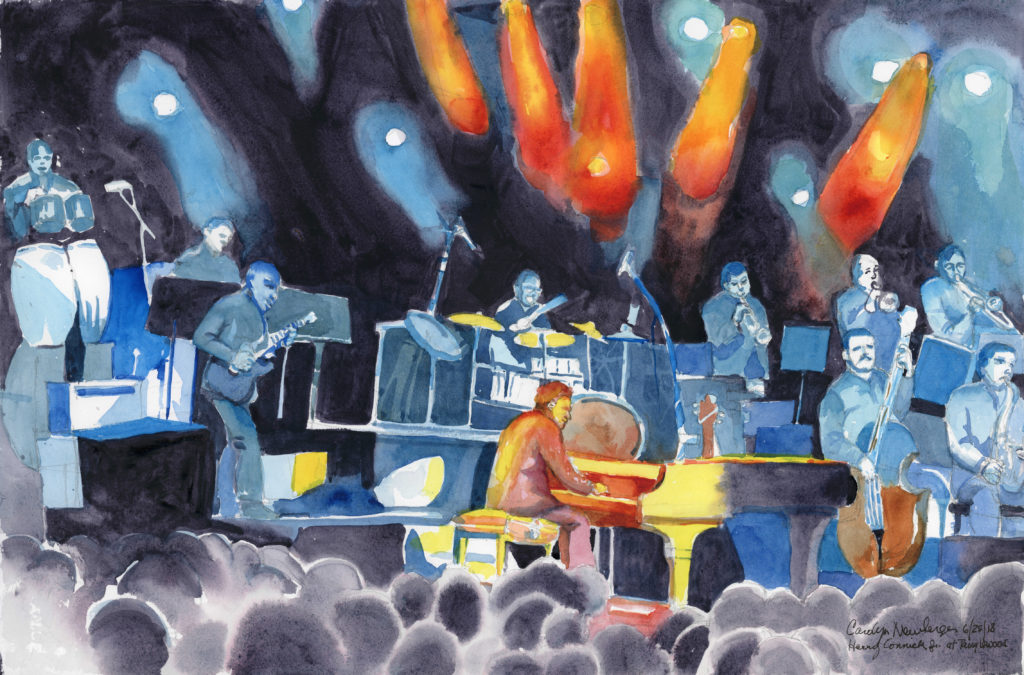 The show presented a musical history of New Orleans jazz featuring a large ensemble, heavy on percussion, and evocative lighting, focusing on its leader, Harry Connick, Jr., who held forth at the piano, trumpet, bass drum, in singing and tap-dancing, and a triumphant march through the Shed. (Illustration by Carolyn Newberger)

Bourbon Street Parade, That’s a Plenty, Didn’t He Ramble, Doctor Jazz, My Love is Here to Stay, Stompin’ at the Savoy, It Had to be You, Tico Tico, Entry of the Gladiators, How Great Thou Art, You’re a Fine Fine Thing, It’s a Wonderful World, Nasty Blues, Just a Closer Walk with Thee, When the Saints Go Marching In

Harry Connick’s loud and lovely New Orleans Tricentennial Celebration brought a capacity crowd to its feet on June 23, 2018, in the Tanglewood Shed. After the first four songs, which were over amplified to the point that melody and harmony were indistinguishable over the crashing cymbals and thumping bass, the sound crew finally got its grip. In up-tempo Bourbon Street Parade (usually performed as a march) and That’s a Plenty, aggressive trumpet and trombone solos hinted at the industrial Dixieland, the bane of serious jazz aficionados.Lenox

But once the volume ratcheted down, the gorgeous, foot-tapping, Haitian- and African-derived polyrhythms emerged.

Yet in this concert, sadly, the ensemble improvisations and vivid counterpoint among the instruments were missing. In the tradition, each player in a quintet, sextet, or septet listens acutely to the others’ invented melodic lines. High-stepping ragtime lightly lifts the dance; blues and spirituals summon the suffering and aspirations for deliverance from slavery and oppression; and whiffs of late Romantic harmony, particular by the pianists’ inventions, together give New Orleans jazz style its distinctive glory.

Mr. Connick’s program offered a fine tour of his talents, spanning all aspects of his storied career – all, in fact, but his film and television acting.

Booker was a formidable pianist and vocalist, with a distinctive gift for left hand “stride” rhythms, jazz adaptations of pop songs and European classics, and fashionable dress. Over his left eye, he wore a patch with a star, which Connick professed never to have asked about. Although Booker’s European tours required him to wear suit and tie on distinguished stages, far and away the best examples of his oeuvre come from bars in New Orleans. There, he felt at home in the company of his people and awed visitors. Here he is, presenting “Papa Was a Rascal” over a locomotive panoply of New Orleans rhythms at the Maple Leaf Bar. Note the quotations of W.C. Handy’s “St. Louis Blues” and Rimsky-Korsakov’s “Flight of the Bumblebee” after the rhythmic warning, “We all got to watch out for the C.I.A.,” and the fetching call and response with the audience. 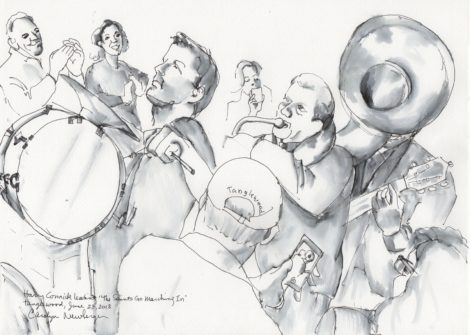 — Pauline Kael
Read next: THEATRE REVIEW: 'The Cake' at Barrington Stage: It's a hit!