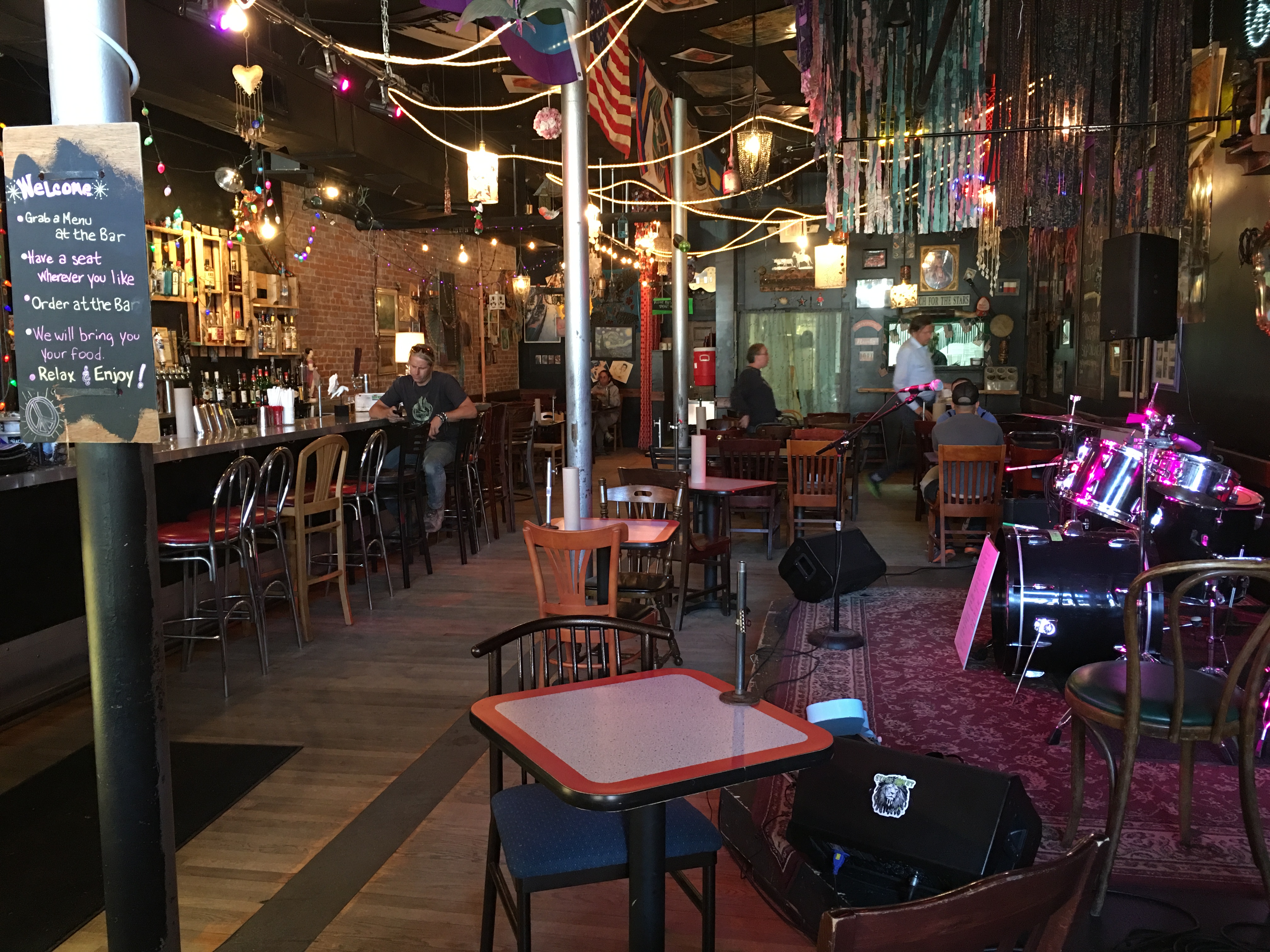 Great Barrington – When the Weller family finishes packing up the Gypsy Joynt, the popular hipster music and food emporium situated prominently on Main Street, and departs caravan style next Thursday (April 28) for Galveston, Texas, to recreate their family-run restaurant and music venue, they won’t be leaving Massachusetts altogether. They will still owe the Department of Revenue (DOR) about $130,000 in unpaid meals taxes, a debt on which they will be paying for years to come, as they have been for the past year and a half, according to Gypsy Joynt owner Lori Weller.

“We are not running from the taxes,” explained Weller, sitting at the end of the restaurant’s bar Wednesday (April 20) with a glass of iced tea. “It’s my fault. I screwed up. But we are making payments every month, on the current taxes and the past due. We’ve been doing that for a year and a half, which is why we are still open. I am not one to leave things hanging. I’m not that kind of person.”

The reason the Wellers – with their 10-person clan of adults and young children – have decided to relocate, Lori Weller insists, is “I just couldn’t take another winter. I’m running to get out of the cold weather. The lease was up, and we decided to do it now.”

As a result of a DOR audit, tax liens were filed in 2015 with the Southern Berkshire Registry of Deeds showing the Gypsy Joynt originally owed more than $154,000 in unpaid meals taxes, $20,000 in unpaid income taxes and penalties for Lori’s ex-husband Keith Weller, and $50 in unpaid sales tax.

The greatest portion of that meals tax liability — $101,746.96 — occurred between December of 2009 and October of 2013, according to liens filed in January of 2015. DOR records show the Gypsy Joynt failing to pay meals taxes from the moment it opened in December of 2009.

“I waited too long to straighten this out,” Weller conceded. “We weren’t paying it all, we got behind, and I wasn’t keeping any receipts then. So now we paying the current tax and the back tax every month. At the moment we owe about $130,000.”

“The town can’t collect those taxes,” explained Lauren Sartori, the town’s Accountant and Financial Coordinator, during an interview in her office in Great Barrington’s Town Hall. “The town has adopted every measure and bylaw possible to collect taxes it’s authorized to collect — even if you owe money on a parking ticket, you will not be issued a license or permit of any kind.” When it comes to the meals tax, however, Ms. Sartori said that “the burden falls on the state” to collect those taxes.

Indeed, the town professed ignorance of the Gypsy Joynt’s tax troubles. “If there was any financial issues with the state, that was not apparent to the town,” explained the Great Barrington Town Manager Jennifer Tabakin. “We don’t have any access to records on taxes that are paid to the state. We are very sad to see them go.”

When news of the Gypsy Joynt’s imminent closure was issued online Friday, April 15, the community reaction, recorded on comments to the Edge’s article, expressed shock and sadness. Many well wishes and tributes were paid to the establishment and the Weller family, as the restaurant announced it would close its doors in less than a week, on Sunday, April 24.

While the Wellers have said they intend to move their business to Galveston, Texas, a spokesperson for the Massachusetts Department of Revenue noted there is nothing the Commonwealth of Massachusetts can do to prevent a business from moving out of state when there are unpaid taxes.

“The liens are public record and are available for viewing by other states” according to the DOR spokesperson. “It shows up on a credit report and is tied to an individual’s Social Security account.”

According to the DOR, actions are usually taken if liens exceed $15,000, with driver’s licenses and liquor licenses typically being revoked. In this case however, those restrictions were apparently not invoked.

The Massachusetts Alcoholic Beverages Control Commission (ABCC) regulations does require that a business be in good standing with the Department of Revenue in order to have a liquor license renewed. According to the Great Barrington Town Hall, the Gypsy Joynt was able to renew its liquor license and currently holds one.

This isn’t the first time that a Weller-operated establishment has packed up in short order. Before caravanning to the Berkshires, the Wellers ran Ya’alls Joynt Pizza in Goldsboro, North Carolina. It also closed abruptly with less than a week’s notice.

According to the popular restaurant review site, Yelp, the last review for Ya’lls was posted on December 2, 2009. The review stated that Ya’lls departure was “sudden” and “quick.” Eight days later, driving three 24-foot Ryder rental trucks, each pulling a car, and four additional cars, each packed to the brim, the 10-member Weller family was in Great Barrington, setting up the Gypsy Joynt, across from the Price Chopper shopping center on Stockbridge Road.

“When we moved, we felt like gypsies,” explained Jordan Weller, musician and songwriter. “After all, we were moving a restaurant across the country. It was a big risk. We shut down our only source of income to move here. We had all our money in Ziploc bags. Failure wasn’t an option.”

In December of 2010, the Wellers held an anniversary party, highlighted by the appearance of the Brooklyn-based band, Milton.

At the time that of anniversary, Lori Weller commented, “What we have here is a living, breathing family restaurant. Because we eat right here ourselves, we’re committed to offering the best home-made natural foods. We bake our own bread, make our own sauces, and our desserts.”

Seven years, later, the Wellers are moving on.

On Monday, April 18, a handwritten note was taped to the Gypsy Joynt front door, explaining that the Gypsies would be in New York for one last time, and would be open again from Wednesday (April 20) through the Joynt’s last day, Sunday the 24th.

On this coming weekend, as a celebratory finale, the Gypsy Joynt will host three bands Saturday and Sunday, including Velvet Frog, Sandy and Sandy, with Chris Merenda sitting in with Jordan Weller’s group.

“We’ve brought music to town and business to town,” noted Keith Weller, patriarch of the Weller family, when the Gypsies had reopened on Wednesday. “People are now coming to this side of Main Street. We’ve done a lot to help this town. Part of the reason the town has been built up is because of us. We have been named one of the country’s top 14 music venues, and Money Magazine wrote that when you visit Great Barrington, be sure to go to the Gypsy Joynt.”

“It’s bittersweet, leaving the Berkshires,” added Lori Weller. “The Berkshires have been great to us. We are evolving and learning. The state is getting its money and will continue to get it. In the meantime, we’re just trying to be the best of us. And we want to thank all those who supported us.”

And she points out that the Gypsy Joynt won’t have disappeared altogether. It’s reopening in Galveston, her hometown, with the same name.

Jacob Robbins and David Scribner collaborated on this story.