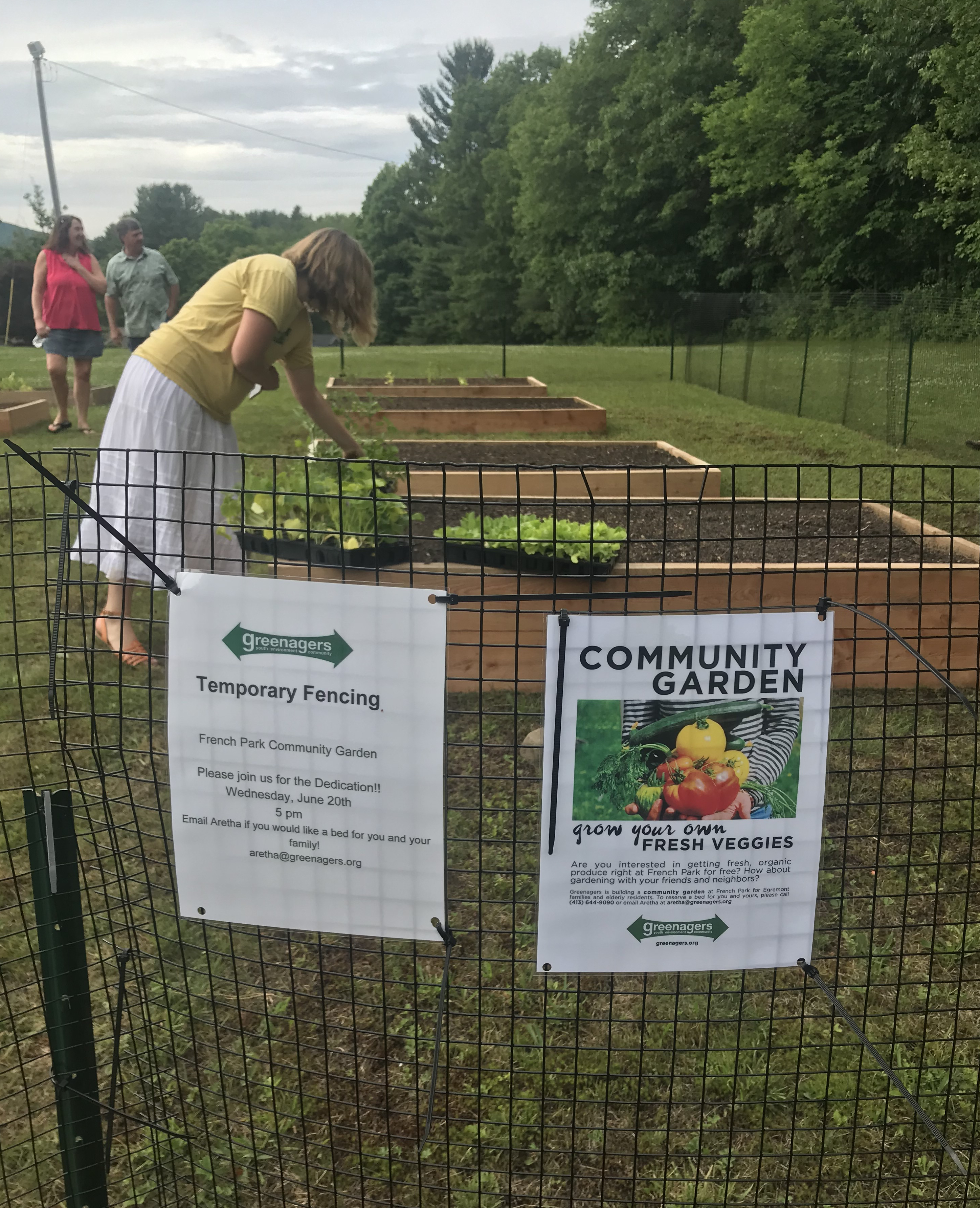 Egremont —“Cheers!”  declared Aretha Whitehead raising her small plastic cup of prosecco into the air on Wednesday afternoon (June 20) before a group of 20 or so Egremont and Great Barrington residents. Whitehead, the coordinator for Greenagers Front Lawn Food program, was toasting the completion of eight new raised-bed organic community gardens that are ready for planting at the edge of French Park, adjacent to the tennis courts. The audience clapped, and before long, couples began grabbing tools to plant with — and more prosecco.

The project is just one in a series of efforts by Greenagers, the Housatonic-based environmental conservation organization which teaches teenagers sustainable farming practices and trail maintenance, the techniques of building and sustaining community gardens, and teaching families how to grow their own food.

There are currently five organic garden beds at French Park that have not been claimed. Those interested in reserving a garden bed can email Aretha Whitehead, at aretha@greenagers.org, or call at 413-644-9090. While the beds are free to plant in, those with families and lower incomes will be given planting priority. People who have reserved a bed are required to do their own gardening and there is a list of prohibited plants on the Greenagers website. In addition, interns at Greenagers will be making weekly visits to water the beds.

The Greenagers Front Lawn Program addresses the growing problem of food waste in America. A 2006 study by The Guardian shows that roughly half the food produced in the U.S. is left to rot and decompose in landfills and combustion facilities across the country. In part, this waste is caused by a lack of consumer awareness about food safety and the intention of expiration dates which are intended as an indicator for merchants not consumers.

In other cases, the reasons for waste are straight forward. In the documentary film “Wasted!”the late Anthony Bourdain explains that many consumers just won’t buy fruits and vegetable that don’t look “perfect.” It stands to reason that if people grow their own food, they might be more hesitant to throw out the leftovers.

The money for the new garden beds was given by a dozen local businesses including Kenver LTD, John Andrews Restaurant and The Old Mill. Greenagers is still looking to raise an additional $2,500 for a permanent 3-board hemlock fence to surround the garden.

As the sun began casting shadows across the garden beds,  Greenagers Vice President Ellen Lahr grabbed a small shovel and began digging as the crowd looked on. Hopefully the new community garden will bring the community together in one of the most important and age old human endeavors — growing food.