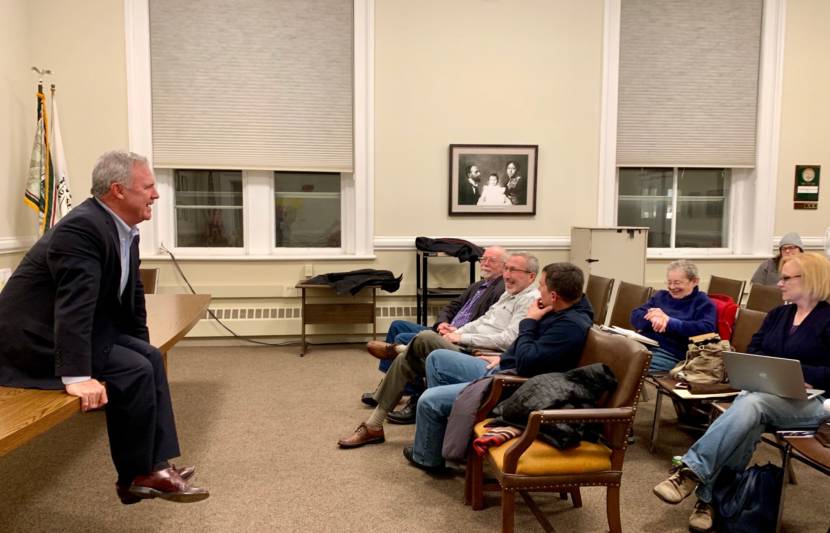 Bernie Lynch of the consulting firm Paradigm Associates leads a discussion at Great Barrington Town Hall about the process of finding a town manager to replace Jennifer Tabakin who will be leaving in June. In the front row are Great Barrington Selectboard members Bill Cooke, Chairman Steve Bannon, and Dan Bailly. Photo: Andrew Blechman

Great Barrington — The first public outreach Monday night (November 19) by the Select Board’s search for a new town manager was more notable for what it wasn’t than what it was. It wasn’t contentious. It wasn’t filled with excitement or enthusiasm. And it wasn’t well attended. Aside from the press, public officials, and a search consultant, the meeting on the second floor of Town Hall was attended by two private citizens.

Perhaps it was underpublicized. Maybe it was the dark dreary drizzle outside. Possibly just simple citizen apathy. Or it could have been a lack of enthusiasm for replacing current Town Manager, Jennifer Tabakin, who has chosen not to extend her contract beyond what will soon be six years.

“Things have been going very smoothly in town since she’s been here,” Selectman Ed Abrahams said after the meeting. “The tax rate hasn’t gone up as much as we thought it might because of all the new growth. I think she’s been great for the town.”

Selectman Bill Cooke concurred. “I think the town’s been run just fine the past five years,” he said. “Jennifer did a great job. I’m very sorry to see her go.”

The meeting was led by Bernie Lynch of Plymouth-based Community Paradigm Associates, the firm hired to lead the search for a new town manager, who gave an informal presentation of what his firm does and how the process will proceed.

Lynch was optimistic about attracting excellent candidates, but he did admit that there will be a number of challenges in finding and hiring a new town manager. Among them is attracting talent to the Berkshires, which is by some measures, remote. Unlike the eastern part of the state, Great Barrington is not near employment centers, which can be a complication for a two-income family — there might be a town manager job for one spouse, but the other spouse may have difficulty finding work. And given today’s unusually low unemployment, it’s a so-called buyer’s market with more open positions than applicants.

On the plus side he said the town has a vibrant arts scene and cultural environment, in addition to the area’s natural beauty and solid school system. “There’s a great quality of life, that’s what we have to sell,” Lynch said. He was also impressed by the potential for redeveloping the town’s many mill buildings.

Lynch, who has thirty years of municipal experience, including a number of years running the city of Lowell, said his first goal is to better understand the town, its needs, its wants, and to meet with town officials, department heads, and residents. His research and observations will become the basis of a report for the Select Board as well as an advertised job description. A committee made up of town officials and private citizens will serve as a screening committee whose goal will be to provide the Select Board with a list of finalists. The committee will likely be appointed in December and start work in January. The goal is to hire a new town manager sometime in spring. Lynch said the ideal candidate will have a mixture of a solid knowledge base and demonstrated skills, as well as a passion for municipal government and the right personality.

Curiously, Lynch noted that most candidates will likely be over 55 or under 35 — Boomers and Millennials. Apparently, few Gen X’ers entered careers in civic governance, despite being noteworthy for being an extraordinarily talented (and handsome) generation.

When Lynch asked attendees their concerns for the town and what they hoped from a new town manager, the room was mostly quiet. Veteran local journalist Eileen Mooney said she wanted a town manager experienced with dealing with the media. Karen Smith said she wanted a good communicator who emphasized government transparency. Anne O’Dwyer, a member of the Finance Committee, mentioned affordable housing and economic development. “Our population is aging,” she said. “How can we market our town as a desirable place for young people, so we can attract them and retain them?”

Natalie Narotzky, a town resident, said she was concerned with affordability. “We really need to focus on affordable housing,” she said. “And climate change.”

Despite the presence of all five Selectman, the press, and Karen Smith, the room quickly ran out of questions and comments. “Anything else?” Lynch asked with a smile, a bit befuddled by the evening’s muted atmosphere. “I’m certainly not going to force people to speak.”