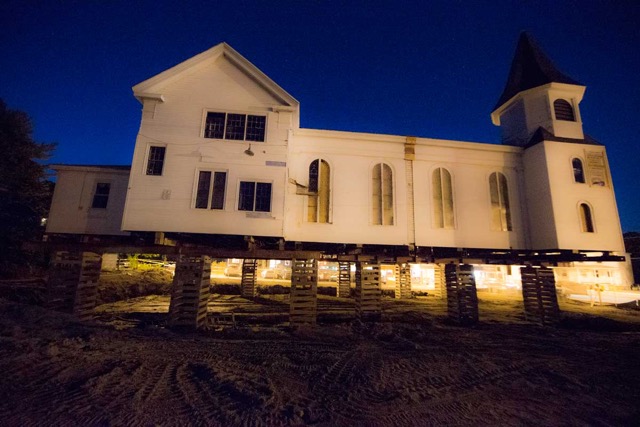 Great Barrington – It is a sight to behold. A classic, wood-framed New England church – the oldest church building in town, in fact — with its proud, black-hatted steeple atop the sanctuary, all perched on 12 spindles of interlaced 4 x 4’s and 8 x 8’s, 14 feet off the ground as if poised to lift off to the heavens.

The reality may more down to earth, however, if the launch scheduled for 2017 is successful.

Two years ago, redeveloper and entrepreneur Paul Joffe of New Marlborough spied a commercial opportunity in the 170-year-old, run-down former Methodist Church at 198 Main St., a bit north of the downtown core at the corner of Rossetter Street and adjacent to the popular Prairie Whale restaurant. Across the street is the Rite Aid Pharmacy, the offices of Orion magazine and a renovated row of shops that had once been Bitros Market. It is an area that is developing its own commercial identity.

Joffe envisioned a 79-seat restaurant in the building’s sanctuary, below which – once the foundation had been excavated and the structure itself elevated – would be a ground-level complex of three retail spaces, two offices, a residence and a food kiosk. By the time the project is completed, Joffe estimates he will have spent $1.2 million on converting the Methodist Church to a commercial hub.

“The old foundation was unsafe,” Joffe explained, as he surveyed the progress his contractors were making on preparing the site for the pouring of a new foundation. “It had to be lifted to build a new foundation and in the process, a new space below the main sanctuary.”

For an uplifting drone’s eye view of the church project, see video below:

“It may look precarious,” he observed, “but believe it or not, the church is now more stable, sitting on those cribbing pillars, than it was before.”

Before the foundation is in place, however, Joffe is offering anyone who wishes to leave a message for future inhabitants of Great Barrington a stainless steel time capsule that will be buried beneath the foundation at noon on October 31. There are 100 of them available.

“You can stuff the 6 by 2-inch tube with whatever you want to say,” he said, and he predicts that, buried in cement, the capsules will “outlast wars, plagues and street improvements.”

Time capsules can be reserved by going to 198MainSt.com. “The stainless steel capsules will be interred at a ceremony at 12 noon, when all those who have reserved one will converge on the site to fill their own private capsule before watching it buried deep beneath the sands of Great Barrington,” he explained. “A plaque at the entrance will be the only hint of their presence deep below. Winters and summers will pass while the capsules remain intact and unchanged. They should stay there for a long time, hundreds of years. By the time they are unearthed, people may have three heads and four iPhones.”

Joffe describes himself not only as a specialist in the restoration of buildings of the 1800s but also as a steeplejack by trade. This is the second church reclamation that he’s undertaken, the first being Celebration Chapel, a former Methodist and Episcopal church in Kingston, N.Y., in 2005. He has also renovated six buildings in Brooklyn, N.Y., he says.

But he has found Great Barrington to be an unusually welcoming place.

“The great thing about this town is that it’s so vibrant and alive, and Great Barrington is a town with good people,” he said, noting that the town building inspector has actually helped him improve his plans for the project. “If I could do projects like this one all the time, in a town like Great Barrington, I’d be good.”