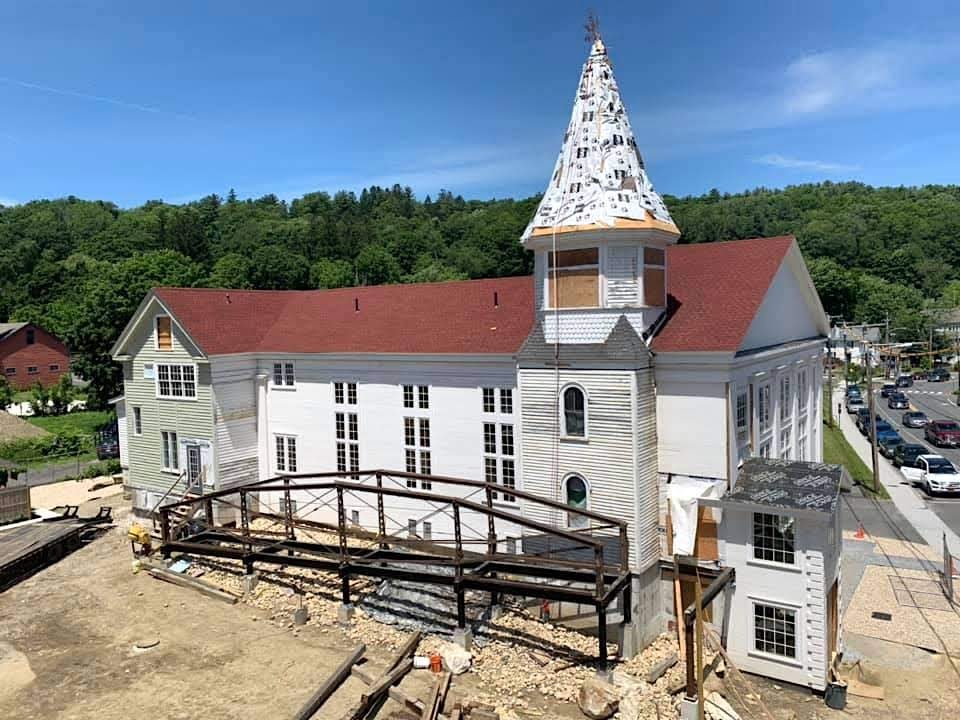 An aerial view of the Flying Church on Main Street in Great Barrington and the newly added remnants of the old Pumpkin Hill Road bridge. Photo: Paul Joffe

Great Barrington — It’s a private construction project that’s been in the works for at least five years. It even picked up a nickname, “the Flying Church,” so named for the extent to which the former United Methodist Church on Main Street needed to be permanently raised in order to create more space.

Now the end is drawing near and developer Paul Joffe has invited the public to an open house Saturday July 6, from 2 p.m. to 6 p.m. at the 198 Main St. site. Attendees will be given a hard-hat tour and the opportunity to engage in a “treasure hunt.”

At that time, spaces in the building will become available for lease to restaurants, offices, music venues and retail stores. One of those retail spaces is a proposed cannabis store—more on that later.

“It’s great that things are looking so good and people here can see we’re really close to the end,” Joffe said in an Edge interview. “I’ve gotten a lot of good comments on the way it looks.”

Joffe said he planned the “treasure hunt” because it turns out that the flying church is the oldest church in Great Barrington and the parking lot has been undisturbed for over a hundred years. Joffe, who bought the property in 2014 for $425,000, said he has not searched the ground for artifacts, “but has saved that pleasure for the residents of Great Barrington.”

The church dissolved at the end of 2011 with a congregation of fewer than 20, according to the website of the New England Conference of United Methodist Churches. Total project costs are not yet known, Joffe said, though he told The Edge in 2015 he expected to spend $1.2 million when all was said and done.

It has been quite a journey for Joffe. The project was delayed for several months when he contracted Lyme disease, which caused his brain to swell, rendering him unable to work. The lack of activity at the site had led many to believe that Joffe had run out of money.

“There was a summer when I couldn’t work at all and I couldn’t even get out of bed,” explained Joffe, who credited his wife, Ingrid, for the support that enabled him to recover. “I was in bad shape for about a year. I’m about 90 percent now. It was painful to know that the job was languishing.”

As for the treasure hunt, Joffe said, starting at 2 p.m. on July 6, metal detectors will be provided at no cost on a first-come, first-served basis. Treasure hunters will be able to keep whatever they find, no matter how valuable, as long as they pose for a photo and record the find.

“There is no telling what lies just inches down,” Joffe said.

The most recent addition to the building is the remnants of the Great Barrington’s Pumpkin Hollow Road bridge, which was lowered last week onto the northern side of the Flying Church.

According to Bridgehunter.com, that old iron bridge over the Green River was built in 1888 and replaced in 1999. The iron sides were being stored at the town recycling center and Joffe bought them at auction after local historian Bernie Drew told him about it. The 58-foot lenticular pony truss span will function as the disabled access to the building.

At the open house, Joffe said, for those who “prefer a more traditional Berkshire treasure,” there will also be farm animals and goods, and barbecue from Farm New Marlborough’s Tom Brazie.

The event will be in stark contrast to the one held on Halloween 2015, when Joffe broke ground on the project and invited attendees to bury upward of 100 time capsules near the front entrance abutting Main Street. Those capsules, Joffe said, will not be a part of the treasure hunt. Besides, they’re buried so deep that they will go unnoticed by metal detectors.

Joffe plans to transform the church, built in 1845, into a mix of retail, dining, office and residential space. If all goes according to plan, one of the those tenants will be Area 413 LLC, a newly formed company that aims to sell cannabis-related products in Joffe’s renovated church.

As required by state law, Area 413 held its community outreach meeting to brief residents on its plans and allow for questions from the audience. About 20 people attended the meeting that was held June 14 at the Fairfield Inn and suites on Stockbridge Road.

The applicant is Maggie Bona, who, with Matt Meandro, recently acquired the Shire Glass cannabis accessories store at 87 Railroad St. in Great Barrington. Also part of the team is Bona’s aunt, Elizabeth Barnhill.

Meandro, the project manager of Area 413, answered most of the questions and guided attendees through some of the details with a prepared PowerPoint presentation. Residents were concerned about a number of issues, including parking.

Meandro said Area 413 will have the use of 22 spots at the church abutting Rosseter Street. Bona said she is also working with Prairie Whale, the restaurant bordering the property to the north, on using some parking spots. And the company will pay for necessary security details to ensure order and compliance with the rules.

The site conforms with town zoning and is not near a school, as required by state law. The store will occupy the rear-most unit on the first floor of the building, with the storefront on the north side. The interior will occupy about 1,000 square feet.

Meandro also emphasized that he and his partners are from the Berkshires. Meandro grew up in Pittsfield and lives in Hancock. Bona is a graduate of Monument Mountain Regional High School and lives on Reed Street in Great Barrington, where she takes care of her disabled mother.

See video below of the first hour, which includes the PowerPoint presentation, of the community outreach meeting held June 14 at the Fairfield Inn and Suites on Stockbridge Road:

About half an hour after the presentation (and after The Edge had left), Hancock resident Mustafa Deen, who advocates for a group called Hancock Cannabis, handed out a statement documenting how the Hancock Planning Board voted to support a temporary moratorium on permitting for cannabis facilities and was considering an outright ban.

Hancock voters passed bylaws this year at the annual town meeting that would significantly restrict indoor cultivation and retailing while banning outright the practice of outdoor cultivation. Hancock Cannabis had opposed the measures and Meandro’s father, Pittsfield orthodontist Raymond Meandro, was on the Hancock Planning Board. Both Meandros spoke publicly in favor of the measures.

“I spoke in favor of some conscientious zoning laws,” Matt Meandro said in an Edge interview. “He’s saying I’m a hypocrite.”

Meandro said it is not inconsistent to simultaneously advocate for the cannabis cause and appropriate zoning regulations. Hancock is also well known for the many wind turbines that sit atop Brodie Mountain as part of the Berkshire Wind Power Project. Those facilities also caused a stir in the tiny town.

Meandro said the next step will be to approach the Great Barrington Selectboard and negotiate a host agreement. At that point, he can start the licensing process with the state Cannabis Control Commission.

“Realistically, we’re looking at a year by the time we open,” Meandro said.