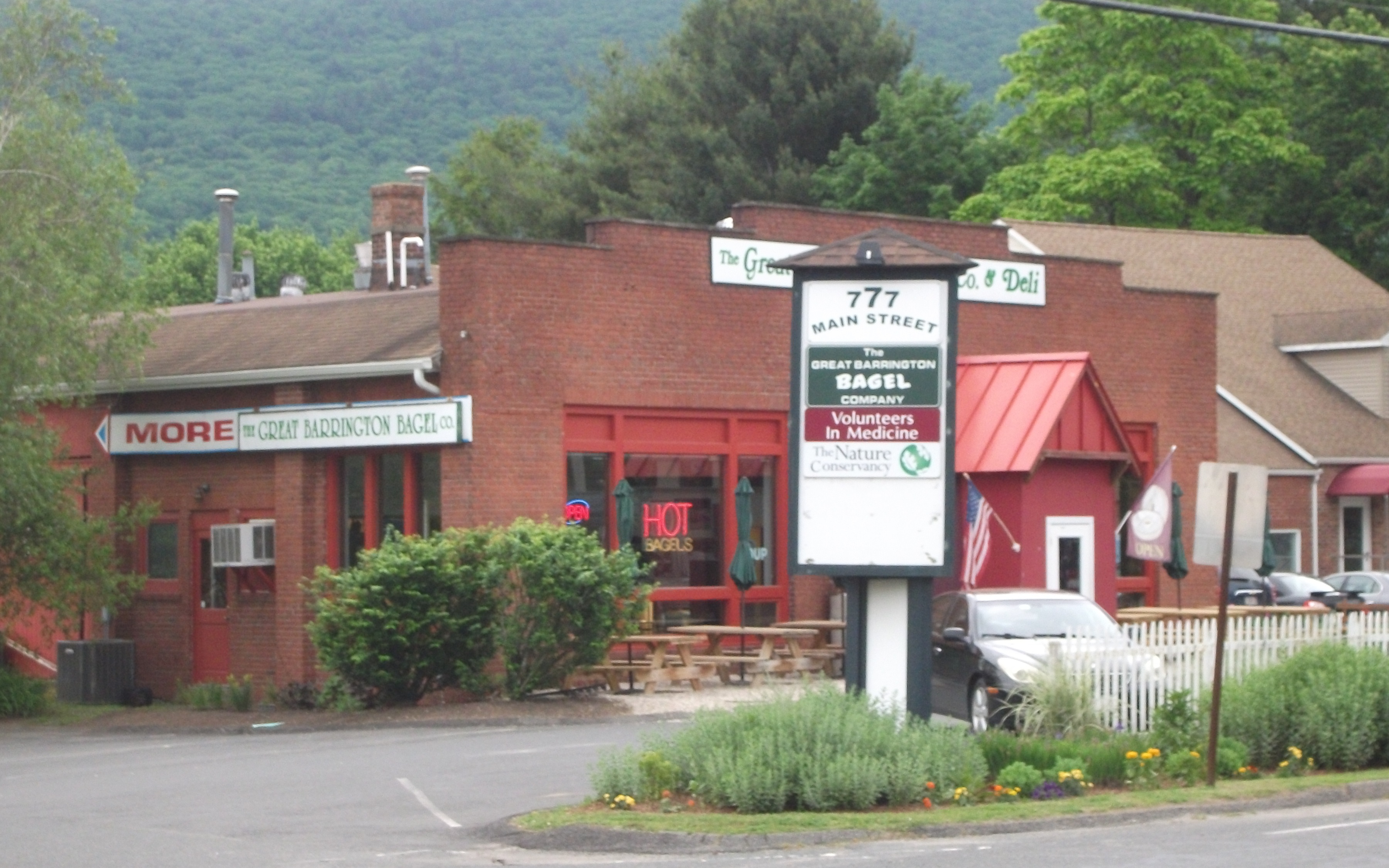 Once the location of Dunn’s Chrysler-Plymouth on South Main Street, Great Barrington, the building, which has been added onto, is now home to Great Barrington Bagel Co., Volunteers in Medicine Berkshires and the Nature Conservancy. Photo: Bernard A. Drew

Where do you go to buy a new car these days? Certainly not Great Barrington. The last new-car dealerships abandoned the town a decade ago, leaving Berkshire GMC just below the town line in Sheffield the sole upholder in South Berkshire of Detroit’s workmanship — any automotive workmanship, for that matter.

But unlike retired fire stations, Main Street dry cleaner buildings or a Housatonic schoolhouse, auto mercantiles are quite resilient. There are still 10 of these purpose-built showrooms in adaptive reuse in Great Barrington. They now house a variety of businesses.

Unless you’ve been in town a couple of decades, you may not remember them all.

Great Barrington’s first car salesman, George E. Sweet, brought Locomobiles to the annual agricultural fair in September 1902 and sold one to Sam Fox and another to George Fox. Sweet soon sold Studebakers at a lot at the corner of Main and Reed streets, then relocated to Castle Street in the 1940s. After that, Sweet was on Bridge Street selling International trucks.

John N. Easland opened the town’s first automobile station in 1905 at the corner of Main and Bridge streets, “Convenient to hotels.” He installed a Fairbanks gasoline engine and pump to provide air for inflating auto and bicycle tires in 1906. The business was a Rambler agency at first, then sold Chevrolets. The sales office moved to Railroad Street in 1915; after a showroom remodel in 1920, the businessman sold Studebakers. John T. Harper Garage took over the Easland corner site and erected a new building in 1925 to sell Chevrolet cars and trucks, Oldsmobiles and Nashes. That building was later an A&P grocery store until it was taken down in 1976 to make way for Pittsfield Cooperative Bank.

Dealerships came and went. Barnes & Fox sold Chandler cars. Karl M. Foster was agent for Studebaker and later Cadillac. Hickey’s Garage was dealer for Gray and Rickenbacker cars. Marcus A. Barnes’ Berkshire Garage at 32 Castle St., now a parking lot just west of the old fire station, sold Reos and Reo Speedwagons in the 1920s. James G. Bowen was proprietor in the 1930s, succeeded by Gilbert T. Nettleton. Frank A. Minkler sold Overlands and Willys Knight cars from 74 Railroad St. in the ’20s; the office was where the upper level of the Triplex Cinema is now.

Central Garage, formerly the Norton stable in the rear of the Marble Block, was agency for Moon autos. George M. Chamberlain bought the business in 1926 and sold Buicks. Needing more space, the garage leased the stable at the rear of the Crotty Block in 1936. George P. Adams of Lenox said the garage could be reached through an alleyway that is now for foot traffic only — Rotary Way. The building, later home to Taconic Lumber, burned in 1987. Adams worked at Chamberlain’s part-time after the war, when his father, Peter I. Adams, was the owner. “Ponzi” Nault was a full-time garage employee.

“The garage had a Model A Ford wrecker,” Adams added.

In the 1950s, Barrington Motors, a retailer of Chryslers and Plymouths, was at 8 Bridge St. Cook’s Auto had taken over Central Garage, selling Oldsmobiles.

But beginning in the 1920s, a new generation of merchants constructed buildings specifically to show off their new cars.

But with all those dealerships now long gone, what came of the buildings?

Everett Pell and Henry A. Dodge started a car dealership at 777 South Main St. in the 1930s, neighboring the Barrington fairgrounds. It was a Chrysler-Plymouth dealership. After working there for a decade, John T. Dunn decided to go into business for himself. He purchased Pell-Dodge in 1955. Dunn also bought the Pell-Dickinson farm equipment business at the same location, started by Pell and Walter Dickinson. His Amoco gas station was particularly busy during September fair time. Dunn Motors also handled Cadillac and DeSoto autos and Farmall tractors. Dunn retired in 1973.

Frank Peters, “dean of local garagemen,” came to Great Barrington in 1910 to work as a chauffeur. He started a garage in 1914 in Dr. John B. Beebe’s barn on Main Street. He moved to the former Paul & Walker livery near the Hotel Miller and acquired the Dodge agency. He purchased land at the corner of Main and Maple streets in 1925 and erected a building four years later. Berkshire Oil bought Peters Garage in 1961 and opened Speedy Car Wash. Henry J. Cairns acquired the business in 1962. John B. McDermott took over the M&M Servicecenter, as it became known, in 1971. In 1980, Main & Maple Realty Trust purchased the property and converted the garage to retail shops.

Spaulding Chevrolet owner William Whittaker built a showroom at 10 Maple Ave. in 1985 just west of the Christian Science church. The business later became Condor Chevrolet-Pontiac-Buick-Dolds & Geo. After the auto dealership closed, the building in 2006 was briefly considered as the site for a new fire station.

Whalen & Kastner in 1922 acquired part of the former Edward Searles estate for a new $50,000 garage to house 125 machines. M. Curtin Whalen had begun a Ford dealership in 1915 with Edward T. “Skippy” Kastner at 42 Railroad St. dealership adding Lincolns in 1922. A new garage went up in 1924 and was extended five years later. This is apparently the oldest surviving dealership garage in town. The partners built a gas station in 1929 and modernized it in 1951. The agency sold more than 3,000 Fords by the time it leased the garage to another operator in 1950. Sold in 1953, the business became Mahaiwe Motors. Robert K. Wheeler was the chief investor. The Mahaiwe Motors Ford agency was sold in 1958 to Ernest B. Blood, then in 1963 to Fred D. Vorck of Wellesly and William Brundage of Stockbridge. William “Bill” Whitaker bought the Whalen & Kastner block and gas station in 1973 and, five years later, sold to William Sidney and Isadore Goodman.

Berkshire’s oldest retired auto garage and dealership owner is William Dempsey of Great Barrington, who marked his 100th birthday in January 2018. He and his father, Matthew J., bought a livery/buggy business in South Egremont in 1921. It became a Socony station. Dempsey took on a Pontiac franchise and moved in 1936 to Railroad Street, Great Barrington, to open Dempsey’s Garage. Brother Matt Dempsey joined the firm in 1949 and they opened a new 5,000-square-foot building on Bridge Street to sell Pontiacs, later Buick, Oldsmobile and GMC.

Sons William and Matthew continued the business with Dempsey’s widow, Beatrice. They built a new Quonset body shop in 1959. The garage in 1961 handled the TR-3 and other Triumph models. Robert Riggs bought the dealership in 1988 and moved the business to the former Plaza Ford site on Stockbridge Road, where it later became Condor Falcon Chevrolet.

Frank W. Spaulding of Sheffield was a teamster for George H. Stevens lumber, then worked for E.J. Adams & Son grain dealer. He and son Edward established a Sinclair station in 1938, relocating to 67 State Road in 1946 when the family acquired the Chevrolet franchise. Donald F. Spaulding eventually became company president. Frank E. Spaulding was clerk and treasurer. Spaulding Chevrolet sold to William and Ruth Whittaker in 1985 and the business became Whittaker Chevrolet. Whitaker moved to a new building on Maple Avenue.

Kot’s Buick advertised that year’s new model in the Berkshire Eagle and had a display at the Great Barrington Auto Show in July 1956. Kot also owned a lumberyard where Barrington Antiques Center is now on South Main Street, David Moulthrop recalled.

Bill Whitaker in 1967 opened a Ford dealership at 305 Stockbridge Road. It went through several owners including Hugh H. Spohn & Sons before closing in 1979. Great Barrington Highway Superintendent Francis VanDeusen urged the town to buy the building for a highway department garage. It instead became a Berkshire Community College campus and housed an antiques and flea market before Condor bought it and restored it as an auto dealership in the early 1990s.

William L. Caffrey bought Jack Dunn’s business on South Main Street in 1982 and relocated it and Lee Ford to 396-398 Stockbridge Road in 1985. Jonathan Caffrey operated the firm for a few years then sold to Pete’s Motors, named for Peter Quattrochi, a car retailer in Pittsfield since 1929. Robert Quattrocci (son of Pete) in 1998 put up a second. Pete’s Auto Mall, as the complex was called, sold Ford Trucks, Ford Escape Hybrids, Jeep Wranglers, Dodge Challengers, Dodge Rams and Durangos. In the face of stiff competition from other dealerships and Japanese brands, the business liquidated in 2008.

David Dempsey continues the family name in a second-car dealership at the former Harry’s Auto Service/Gene’s Auto Sales Used Car location at 446 Stockbridge Road at the foot of Monument Mountain. Harry Billings had a Dodge/Plymouth dealership there, according to Moulthrop. Since this was originally a filling station, technically not a purpose-built dealership like the 10 previous listings, it doesn’t belong. On the other hand, it demonstrates a fun chain of motoring history.

This history was assembled with assistance from Dave Moulthrop, Gary Leveille, Mike Fitzpatrick and George Adams.