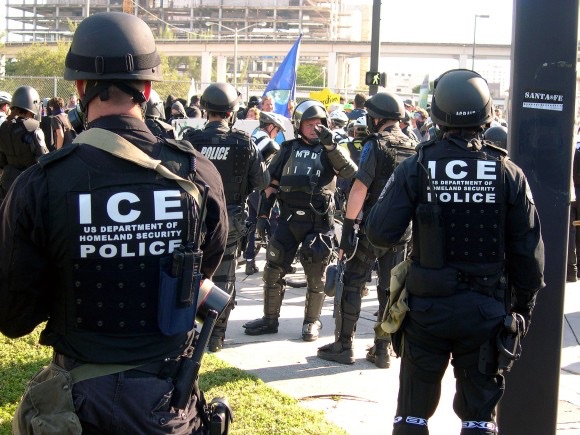 A citizens' petition for a Great Barrington town Trust Policy that would protect law-abiding undocumented residents from the reach of federal law enforcement will be put on the Annual Town Meeting warrant. The town already has a policy in place that local police will not enforce federal immigration law, but this policy spells it out in more detail. Photo courtesy War in Context

Great Barrington — One week after Boston mayor Marty Walsh said he’d harbor undocumented people in his office at City Hall and just a day after three states, including Massachusetts, sued the Trump administration over immigration and refugee orders, a group of local residents drafted a proposed Trust Policy & Order for the town to protect residents from unwarranted federal reach through local law enforcement.

This is lately what the term “sanctuary city” refers to: it is not an official legal term but rather a set of policies meant to keep undocumented residents from being caught in federal nets as they go about their lives here, as long as they haven’t committed a serious crime. It is also designed to make sure no one is afraid to call the police for any reason. Police departments view this as a way to keep everyone safe.

While town and police department policy already states it will treat undocumented citizens like everyone else and will not be an arm of ICE (Immigration and Customs Enforcement), this citizens’ petition – filed at Town Hall Wednesday, Feb. 1 – lays out a more detailed set of policies modeled after and modified from the American Civil Liberties Union (ACLU), Massachusetts Immigrant and Refugee Advocacy Coalition (MIRA) and MiGente trust policies.

The petition for a trust policy has more than 40 signatures; only 10 are needed to put it on the town warrant where it can be approved at Annual Town Meeting in May. It was drafted and filed by Gwendolyn VanSant, CEO and founding director of Multicultural BRIDGE, with partners Berkshire Showing Up for Racial Justice, Berkshire Interfaith Organizing, and Lia Spiliotes, executive director at Community Health Programs (CHP).

The policy would help prevent unwarranted detentions and problems when an undocumented resident comes into contact with law enforcement. That’s why the policy addresses ICE detainers, also known as “ICE holds” or “immigration detainers.” This means that, if someone is released from police custody, they get held a second time over immigration status.

The problem is that these are administrative warrants, not judicial warrants that use a probable cause standard. For this reason, courts across the U.S. are saying ICE detainers are unconstitutional. Just last month the First Circuit U.S. Court of Appeals ruled that probable cause was necessary, under the Fourth Amendment, for detainers. The First Circuit covers Massachusetts.

This trust policy orders that the Great Barrington Police Department only hold someone where there is a “criminal warrant signed by a judge and based on probable cause.”

It also orders the GBPD not to respond to ICE requests about someone in custody, give ICE access to its records or facilities or participate in ICE raids. GBPD Chief William Walsh said he hasn’t seen the petition yet as it was filed only the day before.

But the Massachusetts State Police can temporarily detain undocumented immigrants if ICE had flagged them for serious crimes or suspected terrorism. Last summer, the Baker-Polito administration reversed part of the existing policy, making it consistent with national policy. State police are still not allowed to enforce federal immigration law nor ask about documentation status. The ACLU has still expressed some concern over ICE’s reach even in such cases.

In a statement from Baker’s office, Communications Director Lizzy Guyton wrote that, “the administration will continue to enforce policies giving the State Police the tools necessary to detain violent criminals or suspected terrorists wanted by federal authorities.”

Baker, however, believes sanctuary city status “should be decided at the local level, but opposes making Massachusetts a sanctuary state.”

The statement also said that Baker does not think building a wall will solve immigration problems.

The proposed Great Barrington Trust Policy also talks about general, sanctuary-type protections of local immigrants who are an “integral part of our labor force ranging from tourism, to the restaurant industry, to healthcare providers, to farmworkers, to business owners and beyond.”

Many of these local undocumented people come through CHP’s doors, for instance, and Spiliotes says, while the organization that cares for the area’s most vulnerable residents will “continue business as usual,” there is a sense of suspense over federal funding and what will happen next.

And next Monday, immigration lawyer Laurel Scott will be at the Bard College at Simon’s Rock campus to discuss how Trump’s executive orders will affect the immigrant population.

Scott’s talk will take place on Monday, Feb. 6, at 7 p.m. in the Clark Auditorium at the Fisher Science and Academic Center at 84 Alford Road, Great Barrington. The event is free and open to the public. 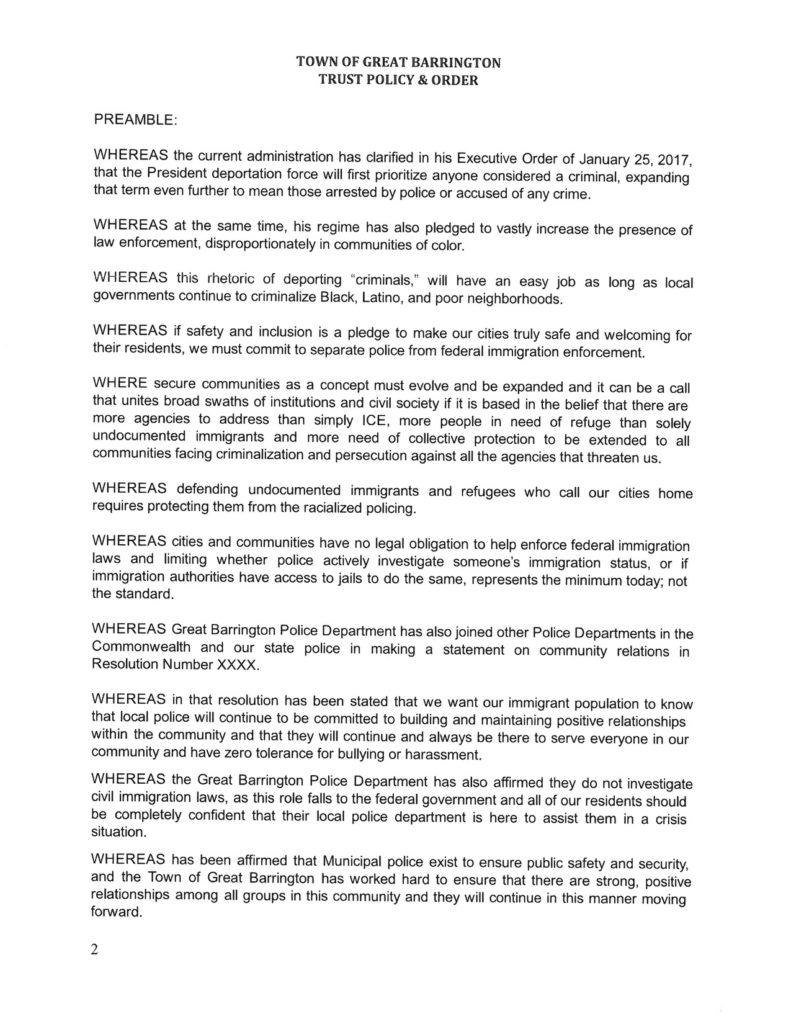 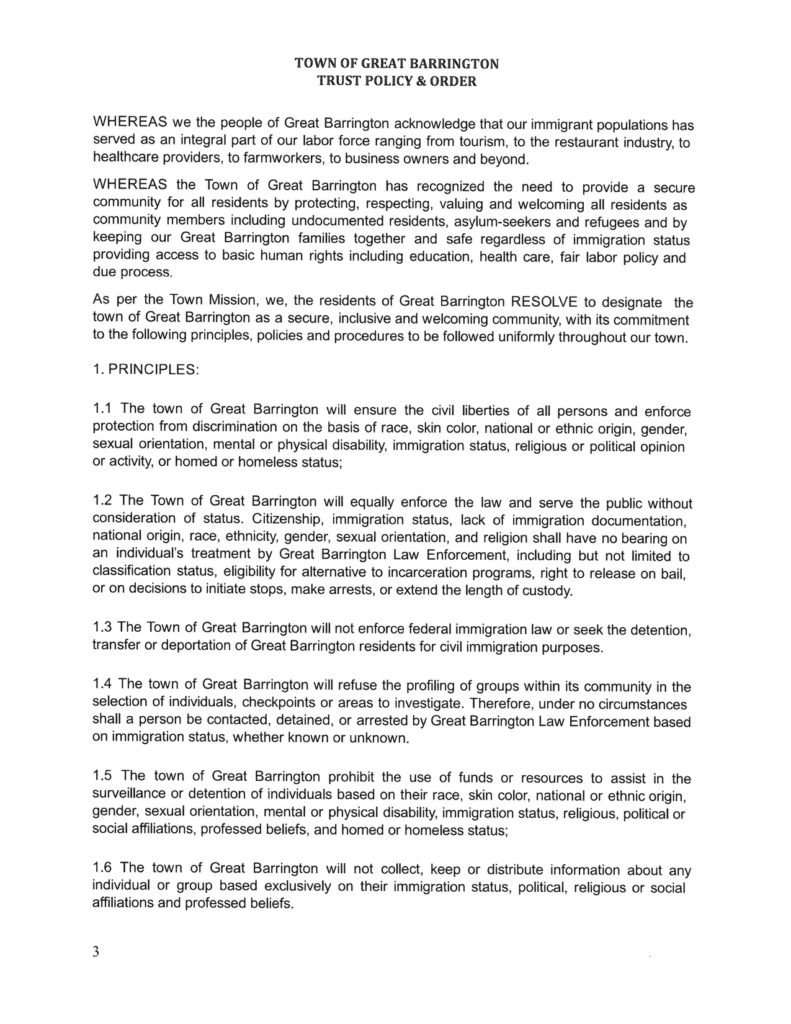 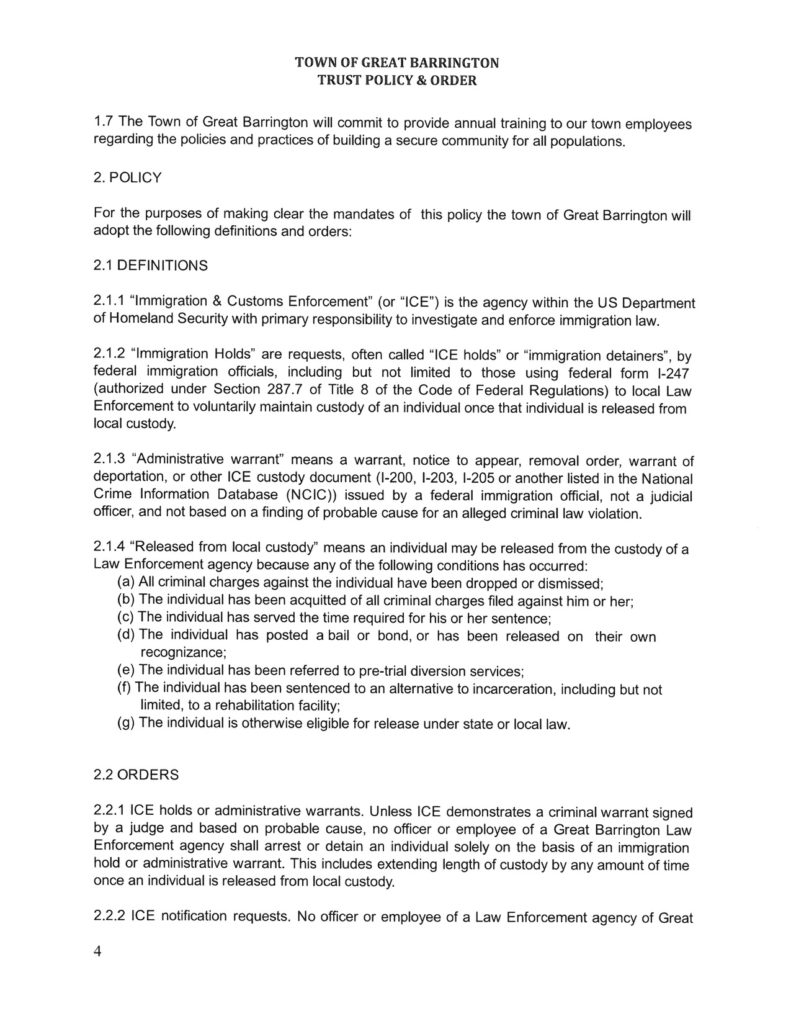 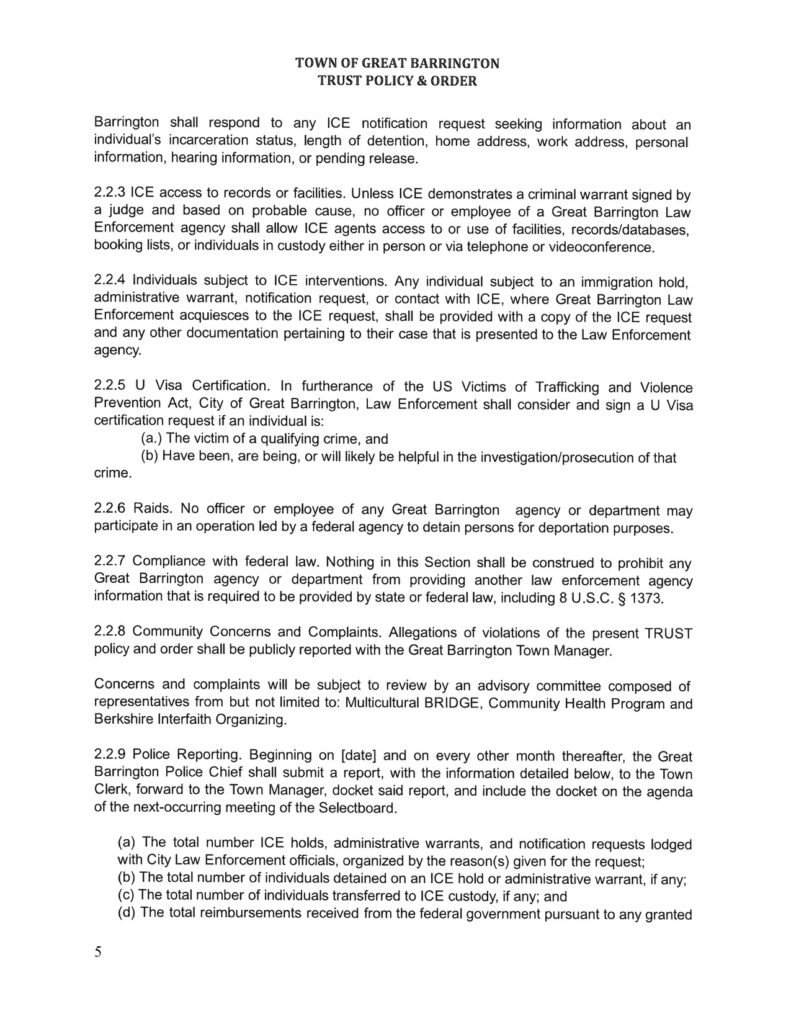 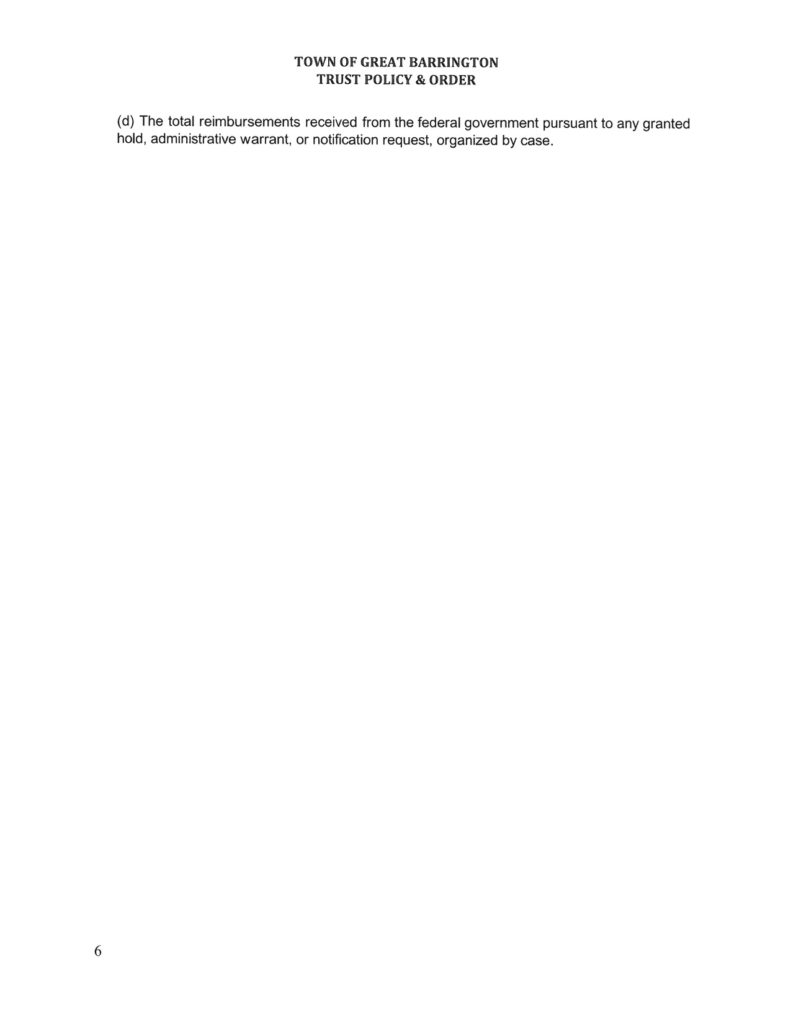