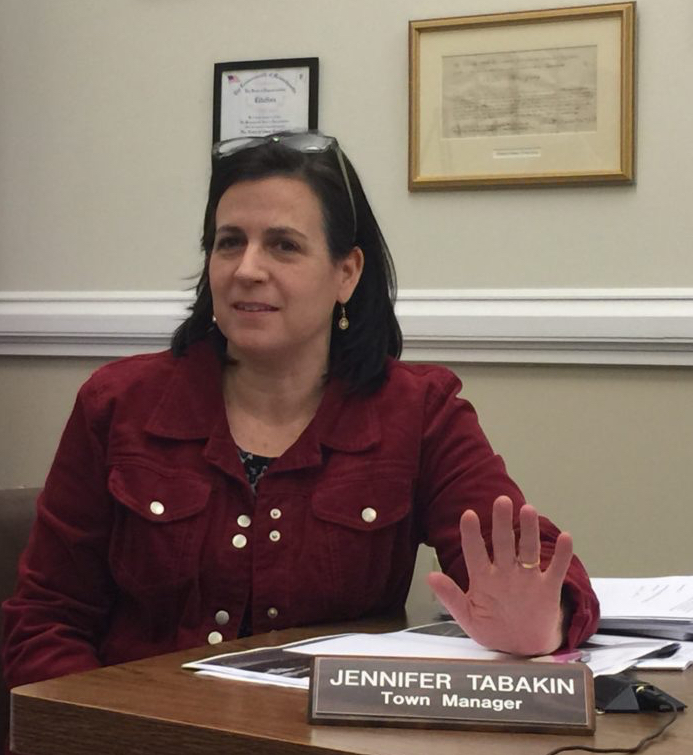 Great Barrington — As the selectmen were completing an annual performance review and preparing for contract negotiations with her, Town Manager Jennifer Tabakin was drafting a letter announcing that she would leave her post when her current contract expires at the end of June 2019.

Click here to read her one-page letter. The Selectboard had thanked her for her service at a special meeting early this evening in Town hall. The first portion of the meeting was held in executive session. The board described her overall review as “satisfactory,” but was unanimous in voting to accept her letter.

“My plan has always been to give my full effort to this job for six years and then broaden my professional experiences by pursuing other opportunities,” Tabakin wrote.

Depending on your point of view, Tabakin had either an easy or a difficult act to follow. She was hired in 2013, fresh from a stint as a capital projects manager in the administration of New York City Mayor Michael Bloomberg.

Tabakin replaced the irascible Kevin O’Donnell, who was let go after poor performance reviews and at his last meeting in 2013 took a shot at his selectboard employers, calling them “dysfunctional” and telling them in no uncertain terms that, “I’ve served my time in hell.”

In her letter, Tabakin said Great Barrington “will remain home for me” and she described it as a “special and unique town.”

“I remain dedicated to my oath to work in the best interest of the town, faithfully serve at the direction of the selectboard and uphold the ethics of my profession and the laws of the town and the commonwealth,” Tabakin said. “Thank you for giving me the opportunity to work with all of you.”

Tabakin this year is earning $119,099. As part of her current contract, the selectboard voted unanimously to give her a 1 percent bonus. According to the contract, she will receive a raise on July 1, when the last year of her agreement begins, to $120,077.