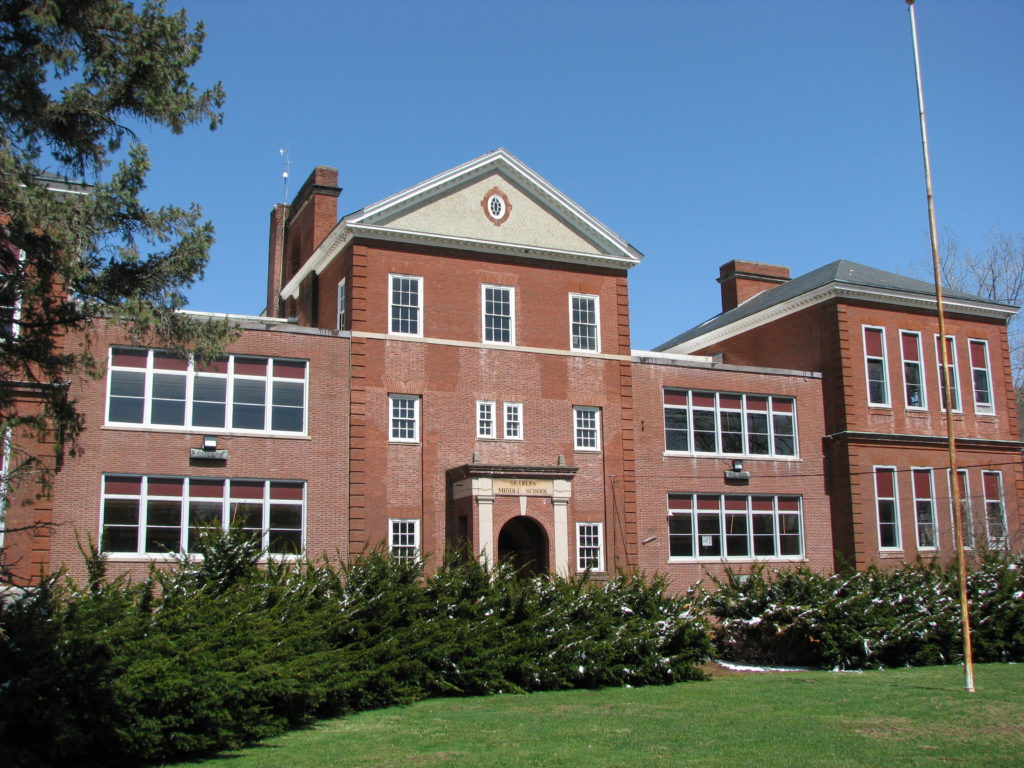 Victor Feldman
The Searles School on Bridge Street that is the object of a special permit that would allow the demolition of the building in order to construct a 95-room hotel.

Great Barrington – Town Counsel David Doneski of Kopelman and Paige has advised the Selectboard that in order to approve a special permit for a proposed 95-room hotel at the site of Searles School, the new structure must preserve “at least some portion” of the Searles School building in order to qualify for an exemption to the 45-room limit adopted by the 2014 Annual Town Meeting. The school building itself would be razed to make way for the hotel, if the permit were approved. The Selectboard alone must determine whether a project complies with the meaning and intent of the bylaw.

While restricting the number of rooms, the bylaw also provided an exemption to the 45-room limit if a proposed hotel were to preserve or allow the redevelopment and reuse of an historic building. 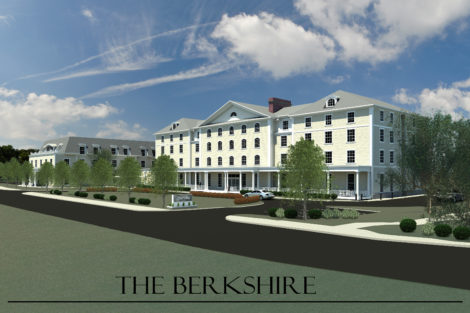 An early rendering of The Berkshire, the hotel proposed for the Searles School site.

In June, the town’s Historical Commission did designate the Searles School as a significant historic complex, in response to an application for such certification from 79 Bridge Street LLC, the entity created by Vijay and Chrystal Mahida who envisioned an upscale motel and conference center on the derelict Searles property on Bridge Street.

When the project was submitted to the Planning Board, however, it became apparent what the Historical Commission had known all along, that the Searles School building and its adjoining gymnasium would be demolished to make way for the new construction. Nevertheless, the Planning Board voted 3 to 2 to recommend the Selectboard approve the special permit.

With the 79 Bridge Street application for a special permit now before it, the Selectboard had requested Doneski to clarify whether the site could still be considered historic if the Searles School no longer existed.

The Selectboard distributed Doneski’s response at Monday’s (November 9) meeting at the same time that the board set December 16 as the date for the continuance of the public hearing to consider the special permit for the 95-room hotel. The hearing will take place at the Monument Valley Middle School at 7 p.m. 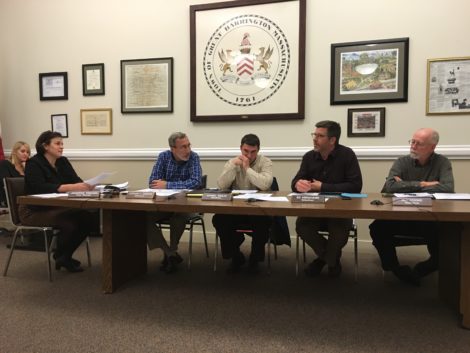 The Town Counsel granted the Selectboard discretion in determining “the extent of the preservation required for compliance with the purposes of the Zoning Bylaw.”

“To the extent that the present special permit application seeks to utilize the historic structure exemption, then, it is my opinion that the Selectboard will need to determine whether the proposed project will ‘redevelop’ the Searles building in a manner that secures to the Town the benefit of the building’s historic or cultural or architectural significance,” Doneski wrote.

This still leaves the Selectboard the unenviable task of sorting out a contradiction: Can a project be deemed as preserving some semblance of a historic structure if that structure has been razed?

Doneski addresses this conundrum as well: “The keys words are ‘redevelop’ and ‘reuse,’ the issue being whether a project that will include demolition of the Searles building is one that redevelops or reuses that building. If a project proposal calls for the elimination of the on-site historic structure, a logical inquiry is whether any benefit such structure provides to the Town can continue to exist… in my view, a project that would entail the entire elimination of the Searles building would not be a ‘reuse’ of the building within the ordinary or dictionary meaning of that word.” 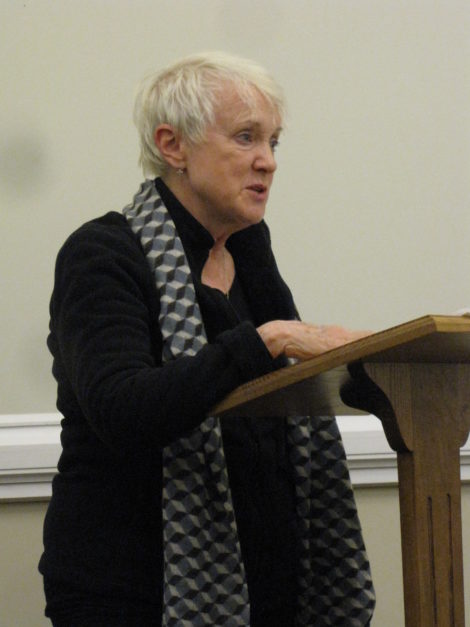 “The designation of the Searles School as a historic structure and then the proposal to demolish the building in order to build a large hotel, that would not otherwise conform to the town bylaws, is nothing more than a cynical attempt by the developers and their attorneys, to avoid the 45-rental room limit voted by the town meeting,” Michael Maguire of Hollenbeck Avenue, reading from a prepared statement, told the Selectboard.

And Housatonic resident Carol Diehl reiterated her objections to the hotel development, noting that it did not comply with the goals of the 2013 Master Plan that placed “a priority on the reuse of existing buildings.”

“To invent a loophole to try to circumvent what are clearly our, the voters, wishes, in order to satisfy private concerns, is to make a mockery of us, the bylaws we have enacted in good faith, and the business owners who have previously abided by them,” she stated. 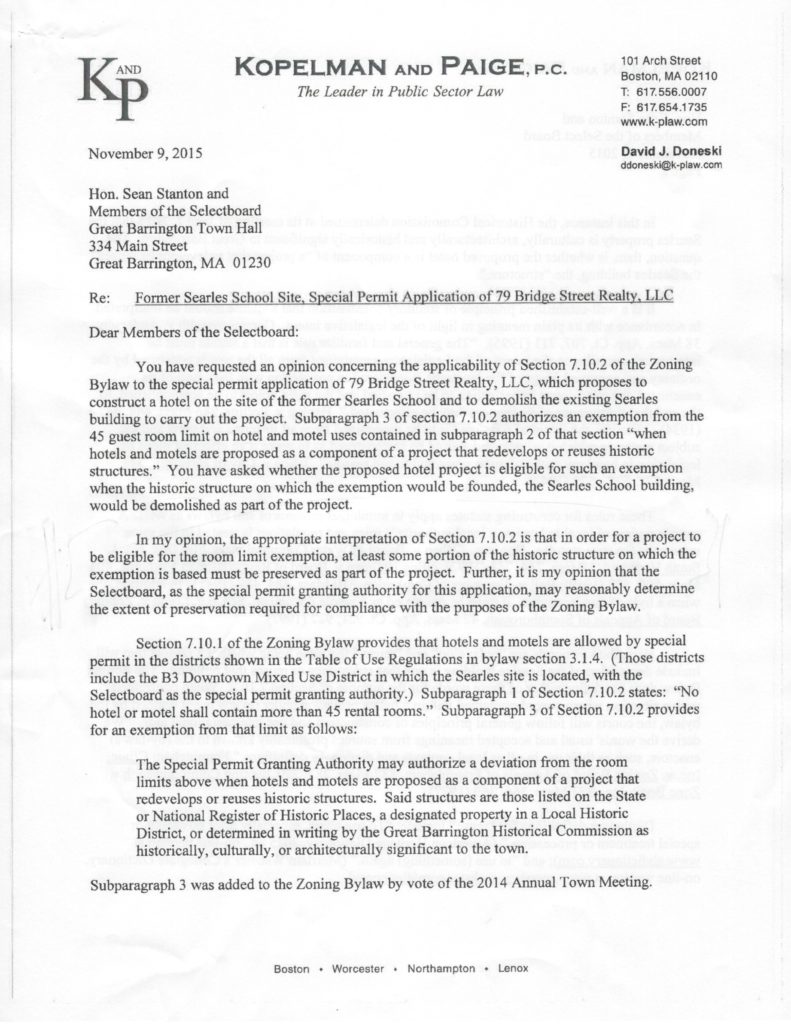 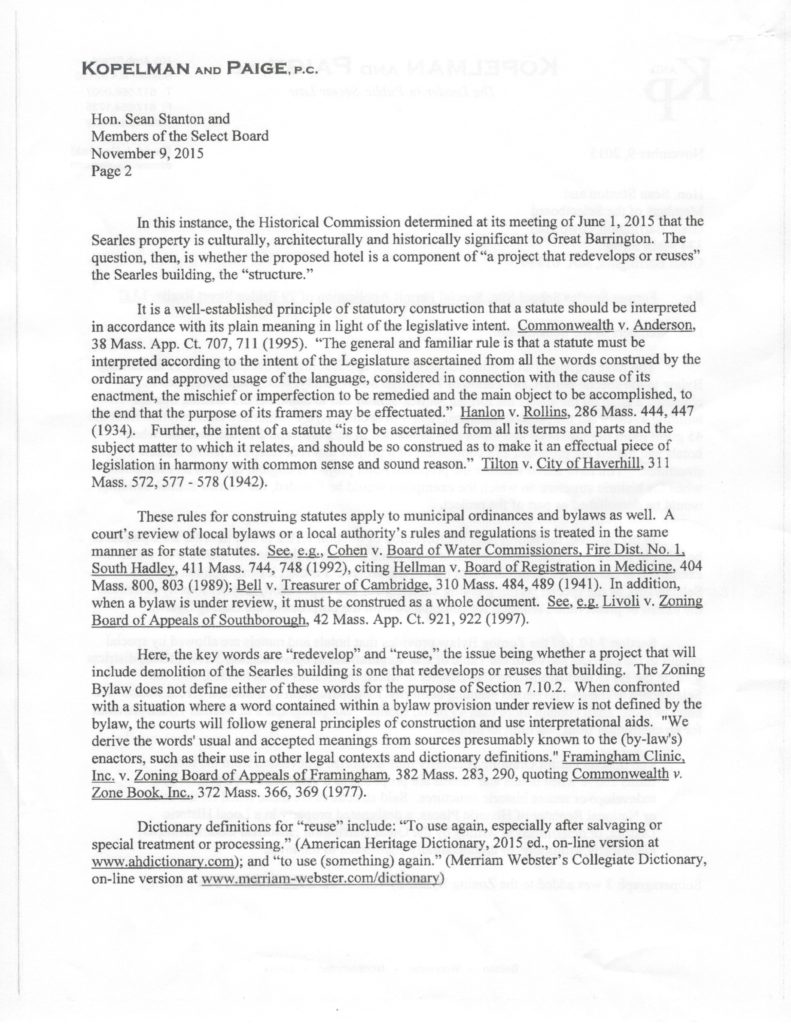 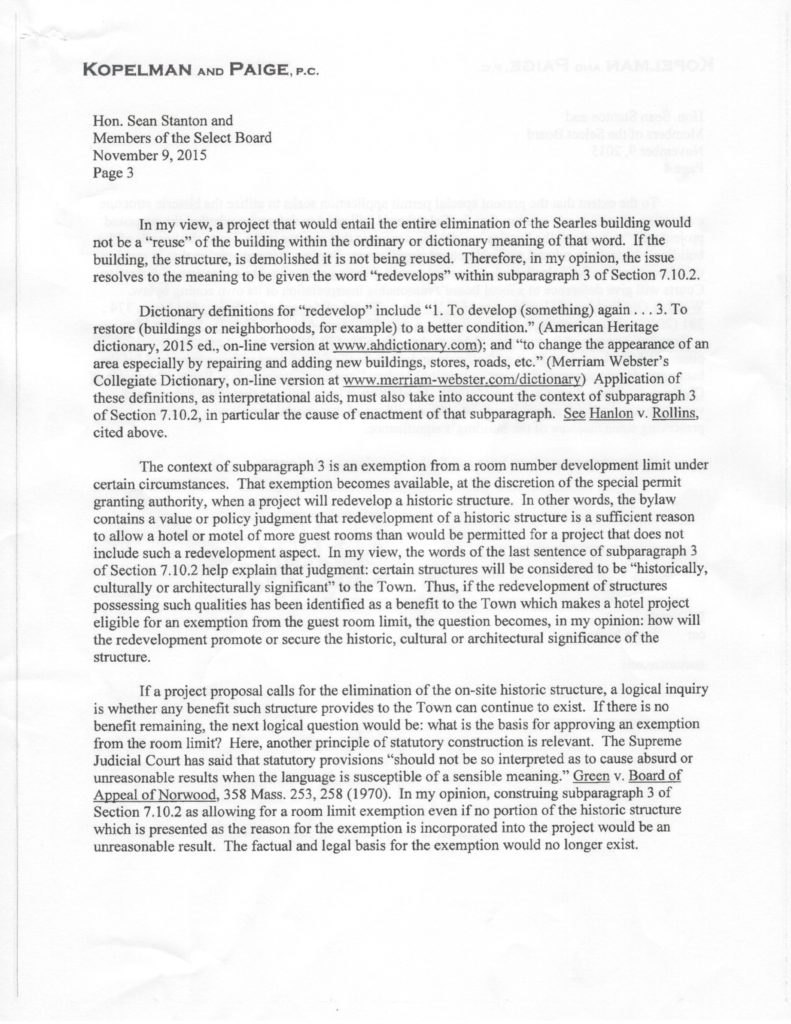 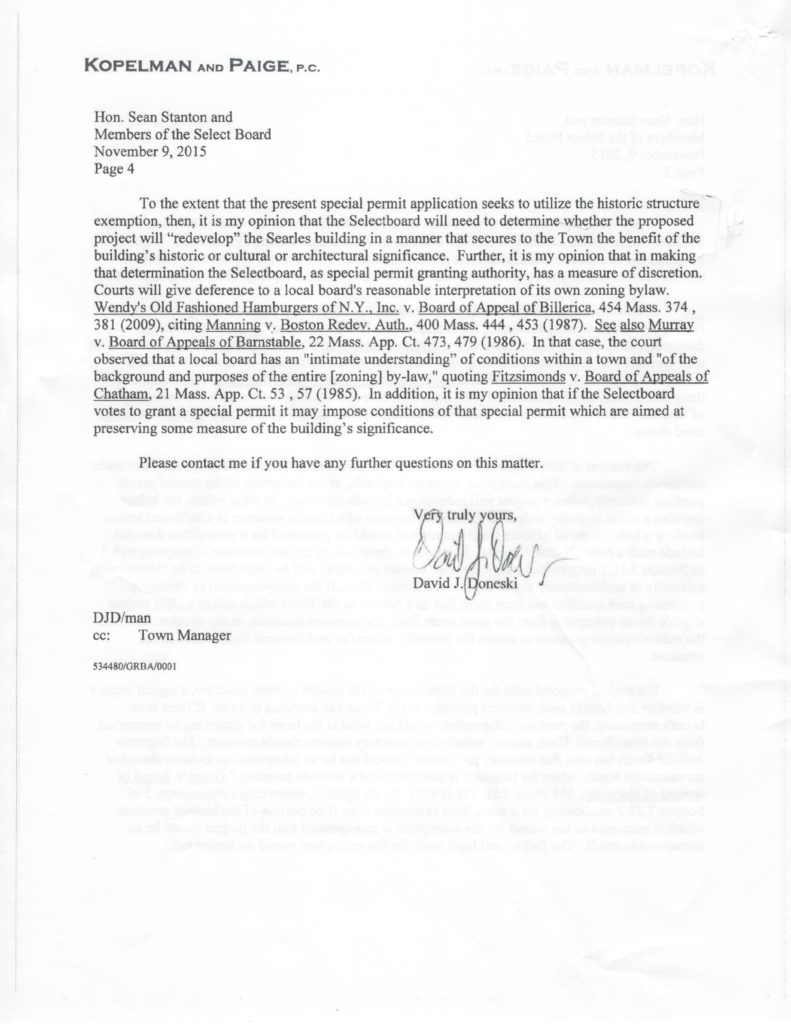