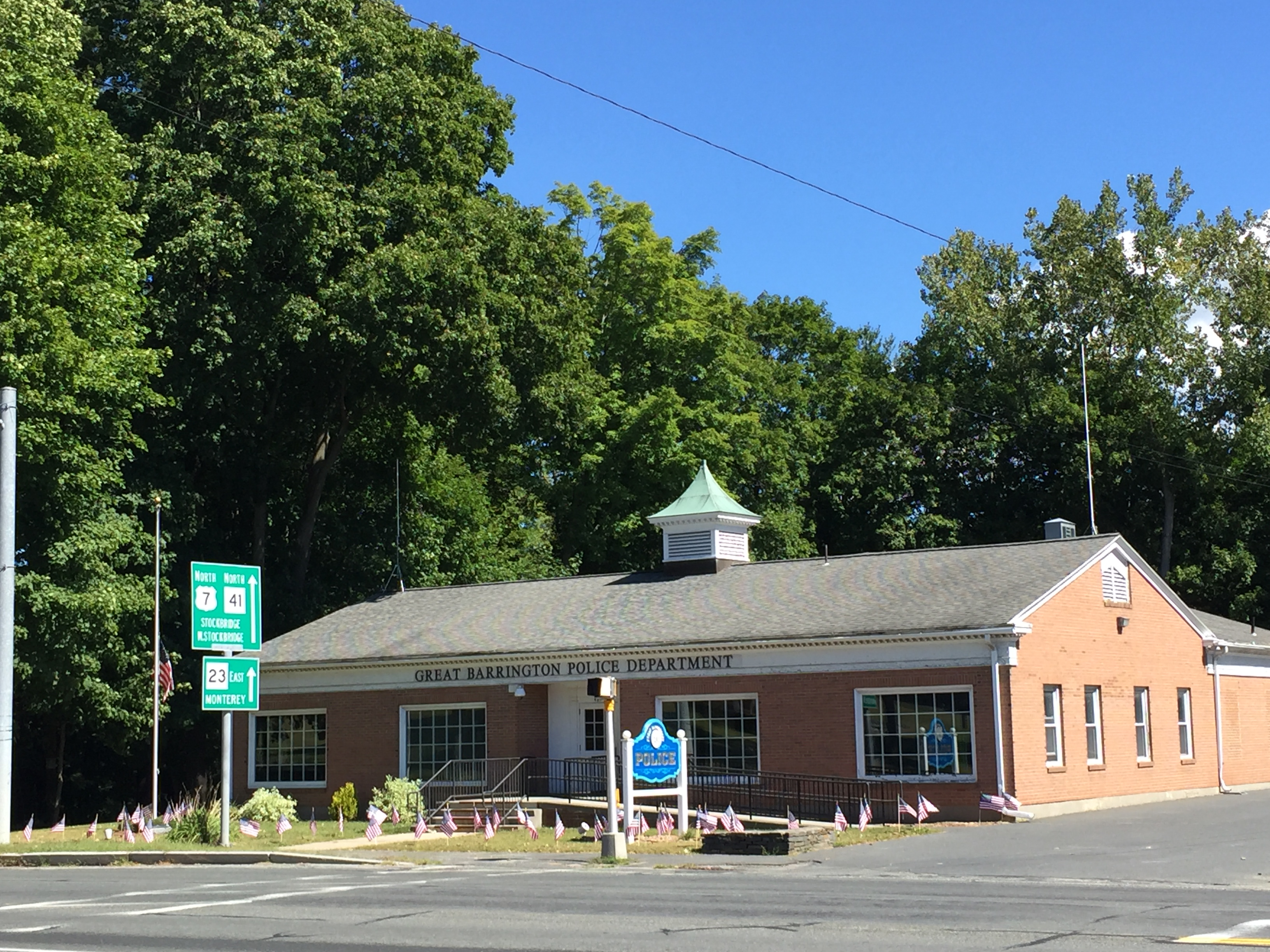 The town and the GBPD say they are still investigating an incident in which GBPD Officer Daniel Bartini was pulled over by a Sheffield officer who said Bartini was “intoxicated.” The town of Great Barrington is hiring a Boston law firm that specializes in police and union matters. The incident revealed deeper issues within the department. Photo: Heather Bellow

The board agreed in a unanimous vote.

More than three weeks after Officer Daniel Bartini was pulled over by a Sheffield Police Department (SPD) officer for straddling the center line and driving erratically near the town line on Route 7, Tabakin said she wanted to hire Deutsch, Williams, Brooks, Derensis & Holland “to work for the town on police issues.” The firm, she added, charges “market rate” at $250 per hour for attorneys and $95 for paralegal work. The fees will come out of the town’s legal budget.

“I don’t expect it to go on for very long,” she added. She also said this special counsel does not replace town counsel attorney David Doneski of Kopelman & Paige.

Board member Dan Bailly asked why Kopelman & Paige wouldn’t do.

“The feeling is we need more specialized help than what they can provide,” said Board Chair Sean Stanton. He said it was “labor and personnel” issues that required a law firm more seasoned in such matters.

It is not hard to see why.

The town and GBPD are still embroiled in a more than three-weeks-long internal investigation into the incident.

Complicating matters, there is no evidence since Bartini was not given Breathalyzer or field sobriety tests, nor was he cited or arrested.

Bartini is officially a part-time officer, but works full time due to department staffing needs. Tabakin declined to answer questions about whether Bartini had been on temporary suspension until the investigation was complete. GBPD Chief William Walsh has also declined public comment.

On September 9 Tabakin wrote the following in an email to the Edge: “We are in the final stages of conducting a very thorough investigation. The Town has retained outside legal counsel to assist us to ensure that the investigation is complete and fair. The Town of Great Barrington takes this issue very seriously and we expect to wrap up this investigation shortly.”

Sheffield Officer Brennan Polidoro stopped Bartini in the early hours of Saturday, August 20, and reported that Bartini and his passenger were “intoxicated.” Bartini had spent the evening with other officers at the Great Barrington VFW after a golf tournament, and some officers went to a home in Ashley Falls later that evening. Polidoro logged the stop and called the department for guidance. After notifying SPD Sergeant Ryan Kryziak and Chief Eric Munson III that he had stopped an off-duty officer, Polidoro allowed Bartini to call an on-duty GBPD officer for a ride home.

Officer Polidoro wrote the following in his log: “Vehicle straddling center line, drifting between marked lanes, and driving on center and white fog lines.” Polidoro said, while he stopped Bartini before the Berkshire GMC dealership, he didn’t come to a complete stop until he had crossed the town line into Great Barrington in front of the former Route 7 Grill property. “Operator…emitting a strong odor of alcoholic beverage, bloodshot glassy eyes, and thick tongued speech. Bartini stating he is coming from a residence in Ashley Falls and had a couple beers. Sobriety in question…”

The incident sparked outrage in South Berkshire County over what appeared to be an act of “professional courtesy” by Polidoro, who was subsequently attacked in newspapers and social media for letting Bartini off the hook. According to confidential sources close to both police departments, Polidoro was likely instructed to do so by his supervisors, whom he had contacted.

Immediately after, public relations efforts by the SPD went awry, silencing both towns and police departments for a time after Munson told another newspaper that the Bartini incident was not professional courtesy, and that it is common for his officers not to arrest impaired drivers and allow them to call for a ride.

More indignation was stoked after The Edge had a face-to-face meeting with those sources who said alcohol use — and drinking and driving — was a rampant problem among a handful of officers, including one ranking officer, within the GBPD. The sources described other officers as feeling tarnished by the GBPD’s reputation in this regard and praised Polidoro for doing his job properly and without hypocrisy.

The sources had begun contacting the Edge with encrypted emails that had also been sent to Tabakin and Walsh. Neither responded to the emails and those allegations of a drinking culture within the department, which the sources said they were inspired to reveal after the death last May of 22-year-old GBPD Officer Ryan Storti, who crashed the car he was driving into a tree after a night of drinking at the Olde Heritage Tavern in Lenox.

The Town of Sheffield is also conducting an internal investigation but is sticking with Kopelman & Paige, according to town administrator Rhonda LaBombard. “We’re hoping to take a look at exactly what happened that night,” she said.

“We certainly don’t think our officer did anything wrong,” said Sheffield Selectboard Chair Nadine Hawver. “It is important…to take the opportunity to review procedures and policies when an issue occurs.”

Calls to attorney David Doneski of Kopelman & Paige were not returned last week.

Tom Aveni, executive director of New Hampshire-based The Police Policy Studies Council, says liability is “huge” for police departments if an officer lets anyone— including one of their own — off the hook from a drunk driving stop, should that person later get behind a wheel and injure or kill someone.

Aveni, whose law enforcement career began in 1978, said he’s seen it happen. He recalled an incident from decades ago where an officer used his discretion and let some teenagers slide. “The kids later got behind the wheel again and there was a fatal accident,” Aveni said. “The agency was taken to the cleaners.”

He says when he first started out as a young officer, “you would have been hard-pressed to arrest an officer” for drinking and driving “unless there was an accident.”

Aveni says things have changed in both attitudes and culture, partly due to fear of career repercussions. “The day has arrived where officers are fearful to let another off for a DUI.”

He said police are put through rigorous background checks before they are hired “to get somebody who is beyond being compromised, who has good judgment and accountability.”

But this also makes them subject to the unyielding pressure of public opinion, Aveni said.

“Police live in a fish tank. If police do something inappropriate, it’s gossip worthy.”

Aveni says he’s seen a big shift towards a healthier police culture but noted that policing is an inherently “unhealthy job.”

“You’re rotating shifts, eating on the run, gulping food between calls — that won’t change…but I don’t buy the idea that a cop can always find refuge in a bottle.”