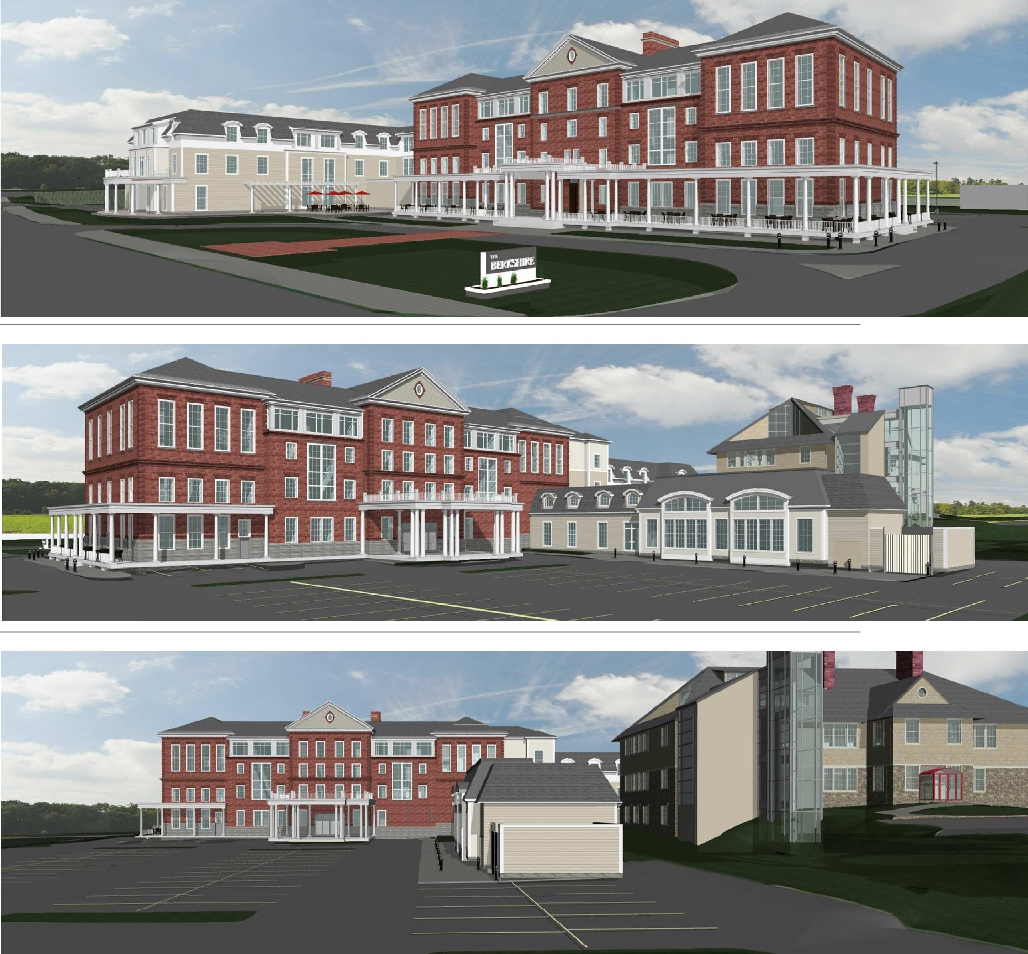 Great Barrington — A controversial plan to build an 88-room upscale hotel at the former Searles School site finally got a green light from the Selectboard last night (February 22) after hearings to issue developers Vijay and Chrystal Mahida the necessary permits stretched out over several months due to community division and concern about the aesthetics and size of the hotel. The Selectboard held the last of the hearings on the proposed hotel in the auditorium of Monument Mountain Regional High School.

The vote was unanimous, and came with a long list of conditions that include both environmental and noise protections, along with town oversight to ensure construction meets historic preservation criteria that was key to project’s support from its critics and some town officials. The major point of opposition to the hotel was size, since the town recently enacted a 45-room limit bylaw to outlaw more hotel chains, while retaining a loophole for a few historic buildings, like Searles, that are hard to develop otherwise. While The Berkshire hotel will not be a chain, the room limit was waived because Searles got a historic designation last summer.

Original plans called for razing the former school on Bridge Street and building a 95-room hotel in its place. After a group of residents grew vocal in opposing the project, which includes a meeting complex, indoor pool and restaurant, the Mahidas began working with residents to redesign the hotel in order to save the building, and the project. That required dropping the room number down to 88.

After the Mahidas announced they would preserve the building, townspeople sighed and went back to smoking the communal peace pipe. But while the developers had won over most critics, evidenced by a paltry turnout at last night’s final hearing, it was clear Vijay and Chrystal Mahida will be held to their every word, and a lawyer was there to make sure.

Enter Lee-based attorney Jeremia Pollard, hired by a group of concerned residents, “Citizens Upholding Bylaws.” The NEWSletter’s Eileen Mooney started the group, it turns out, but told The Edge she would not divulge the names of those who were members.

Pollard came armed with case law precedent that says a permit-granting board can reject a project for more subjective reasons than simply meeting all the criteria for a permit. A board can decide that a project doesn’t “fit with the character and feel of the neighborhood,” or hits a “tipping point,” which happened recently in Lenox when the town’s Zoning Board of Appeals said no to a condo development, which the developer appealed. The ZBA decision was upheld by the state. (See Pollard’s complete letter to the board, below.)

Given all this, Pollard said the board should put detailed construction plans for the reuse and preservation of the Searles building into the special permit as a condition. And if those plans change, the permit should be altered to reflect that.

Board chair Sean Stanton said he thought this was already the way the process would go, and asked Pollard what more should be done, given that detailed construction plans did not yet exist.

Pollard said the town should take it a step further and nail down specifics. “…Identify what the construction is. Just looking at [plans] in the future is not a condition.”

Town Planner Chris Rembold said he thought that was “premature,” that the protections were in place, and that detailed plans were “a long ways down the road.”

Pollard insisted. It’s about preservation, he said. “It’s as simple as that.”

Town Counsel David Doneski appeared to calm skeptics’ nerves when he pointed out that plans must stay true to what has already been vetted through the extensive permitting process, including this one, and that the building inspector would enforce compliance with the revised site and architectural plans.

Before Stanton declared his support, he said it had been a “good” process. “The applicant has taken it all very much to heart and wants to do…what is right for the community,” Stanton added. While some things about the hotel, he said, “are not ideal…nobody’s getting exactly what they want but we all have the potential to get something good for Great Barrington.”

But Stanton’s gavel strike did not put an end to concerns about the process. Planning Board member Suzie Fowle had arrived late, but wondered in an email to the Edge why each board member did not give their reasoning before voting. And in her NEWSletter email the following day, Mooney noted there was no review of documents, or questions or discussion by the board.

Board member Ed Abrahams, however, told The Edge that the review, discussion and questioning process had gone on since last fall, when the Mahidas first unveiled the project, and then through the incarnations that followed. He also pointed out that there were two previous hearings. Concerning letters from the public, he said, “as they came in they would be sent to us [board members] immediately.”

And as for his reasons for voting in favor of the permit, he added, “I didn’t know I was supposed to give my reasons just before the vote. Our reasons are in the [board’s] findings. There was nothing in those findings that I disagree with, so those are the reasons.”

He said he was “happy” to talk about his reasons to anyone who wants them. “But I haven’t been inundated with press calls.”

Vice chair Steve Bannon said “looking back, there’s no reason we couldn’t have made a comment [about the vote] the way Sean did,” but added that he did not feel the need as he was “satisfied with the limitations and conditions that protect the town.” And he said the Mahidas got rid of the bylaw problem when they decided to preserve the building.

Bannon says he understands why people might feel the final hearing was somewhat “anticlimactic.”

“We’ve had three public hearings, we never restricted public comments. It’s fascinating to me that instead of the Selectboard saying they didn’t like the project, the public said it and they did it without the board having to intervene…and Vijay said OK, we’ll change it.”

Text of letter from attorney Jeremia A. Pollard of Hannon Lerner, P.C.:

Dear Members of the Board:

On behalf of the Citizens Upholding Bylaws, please accept the following requests in connection with the special permit conditions for “The Berkshire.” In this regard, the application originally proposed a complete demolishment in violation of the by-law. Subsequently, the project was amended to maintain a façade, but again entailed a demolition of the school. Finally, the project has been amended from a reuse of the façade to an actual preservation of portions of the original building. Prior thereto, the applicant twice tried to avail itself of the zoning incentive of Section 7.10.2 of the Zoning By-law without any meaningful preservation. Accordingly, a building plan with detailed specificity should be submitted and the Board is respectfully urged to consider the following conditions:

In this regard, the board is authorized to incorporate the plans and specifications of the project. See DiGiovanni v. Board of Appeals of Rockport, 19 Mass. App. Ct. 339 (1985). Moreover, as the Board retains substantial discretion in determining to what extent a project comports with the overall character of the neighborhood, the Board is afforded deference in its special permitting capacity. See, e.g., Buccaneer Development, Inc. v. Zoning Board of Appeals of Lenox. Slip Opinion, No. 14-P-855 (2015). In Buccaneer, a recently decided appeal of a denial of a special permit, the Massachusetts Appeals Court definitely ruled that a special permit granting authority retains discretion to deny a special permit even if the special permitting criteria are met by the applicant.

The appellant in Buccaneer had argued that the ZBA’s determination that the project did not fit with the character and feel of the neighborhood was arbitrary and capricious. The majority of the Appeals Court panel held that the ZBA retains discretions to deny a permit, even if the decision is based solely on the board’s assessment of the character of the neighborhood, or as was the case in Lenox, a determination that a “tipping point” had been reached for condominium-style developments in the area in question. There is growing interest in Great Barrington to build hotels, so this case will likely have bearing in the future. I have attached courtesy copies of the Buccaneer case, as it is not yet published in the reporter.