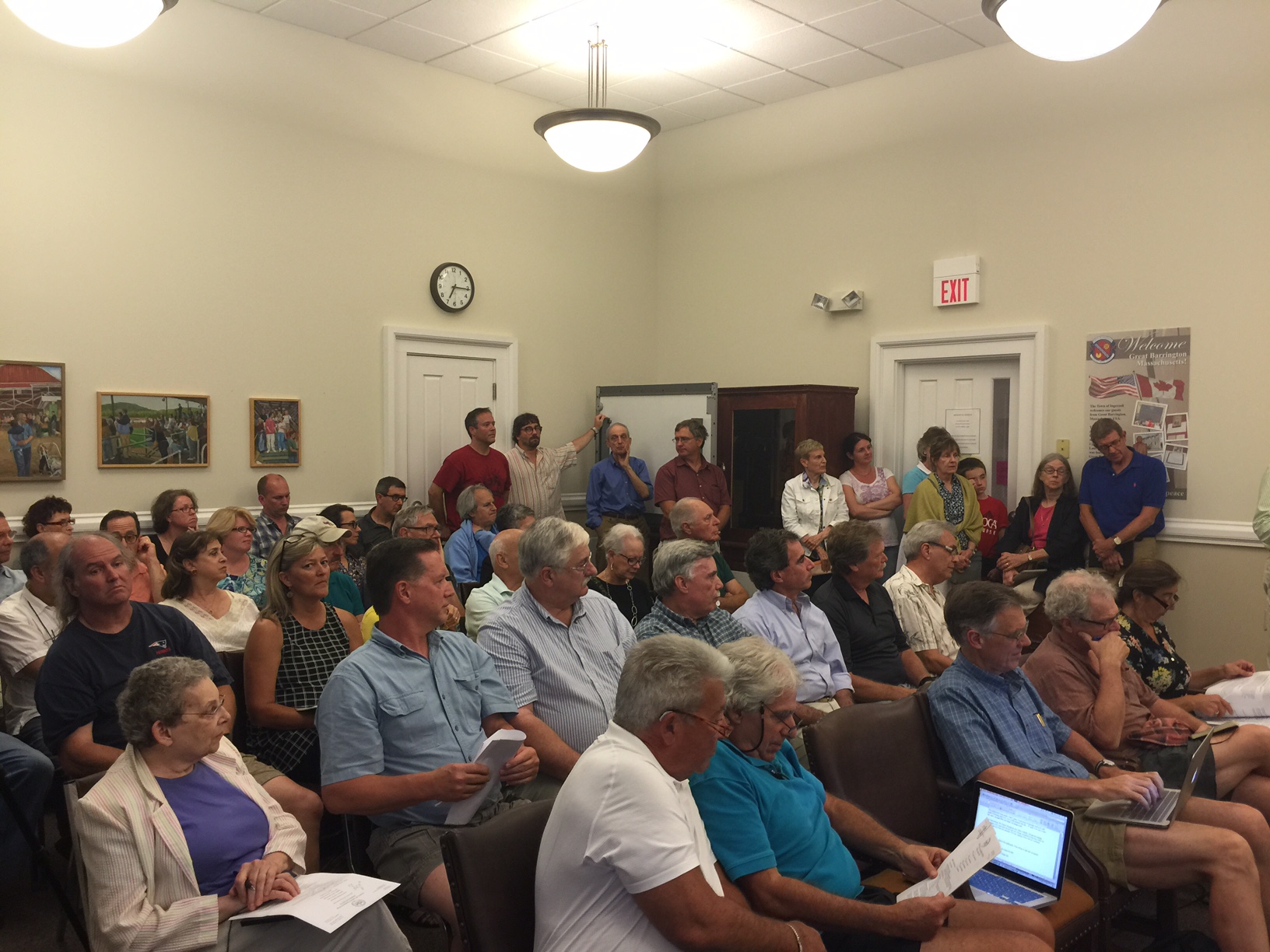 Great Barrington — At what was likely the best attended tax classification hearing in history, the Selectboard Monday (August 24) voted unanimously, as it always has, to keep a single tax rate for the 2016 fiscal year, and voted informally to do the same for 2017, leaving the issue of a residential exemption and split tax rate open for discussion.

But not much consideration, since 4 out of 5 Board members said they did not want to adopt those reforms. Ed Abrahams abstained, saying he had anticipated a hearing and was not prepared to vote, even though it was non-binding.

Town Assessor Chris Lamarre told the Board it needs to increase the tax rate 57 cents from last year to $14.29 per $1000 property valuation in order to raise the 2016 tax levy of $19,808,863. That is the budget that was set by the Selectboard and the Finance Committee last fall. The rate is determined by dividing the levy by the total taxable property in town.

Lamarre also said that the single rate for 2016 was also the recommendation of the Board of Assessors.

But what got the Town Hall meeting room overflowing and hot was the ongoing debate about the possibility of a future tax structure overhaul that would hit not only more affluent residents, but in the opinions of some, might trickle down to harm renters and seniors on fixed incomes. The prospect of such changes for the following fiscal year, 2017, were nipped in the bud by last week’s Finance Committee 3-2 vote against recommending them after citizen outrage was expressed en force at the Committee’s public hearing.

Finance Committee Chairman Michael Wise told the Board as much, even though it was the 2016 rate that was the subject of Monday’s tax rate hearing.

The residential exemption and split tax rate would have taxed higher-end homes and commercial properties more, and in theory cut the tax bills of those in less expensive homes. Wise said he was trying to find a way to make the town more affordable. And it was on this point that Wise was praised at last night’s Board meeting after almost a year of research and number crunching, and nearly three hours of criticism at last week’s hearing on the issue.

“I really appreciate how much work went into this, and how much analysis and effort,” said Board Chairman Sean Stanton. “And almost even more than that, your willingness to keep taking it on the chin.”

Stanton said there didn’t seem to be much reason to discuss 2017 policy until the budget meetings in the fall.

Stanton said he knew why the room was full, and former Finance Committee Chair Sharon Gregory confirmed it by asking the Board to hold a separate public hearing around that time on any potential tax structure changes, given that it is the Board alone that makes the rate decision.

Gregory also suggested that the “affordability” issue be addressed with a different “vehicle.”

Stanton agreed. “Mike [Wise] tried to use a tool that the state allows us to use; it’s not a perfect tool, and Great Barrington, so far as I can tell, is not interested in using it.”

Bannon suggested the Board vote about 2017 policy. Stanton said he wanted to ease public concern about potentially changing the tax structure. But Stanton said he didn’t want to “lock ourselves out of a conversation” on the issue, and so the Board took a non-binding vote to keep a single tax rate.

Abrahams said he “didn’t understand” the vote. “I’m hesitant to say what I think, not having had the hearing yet.”

Bannon said it was to “take some leadership” and let people know how “each of us feels.”

“I’m going to wait,” Abrahams replied. He later told The Edge that he abstained because the vote was taken before he felt he had heard “from everybody.”

“I honestly hadn’t made up my mind because I was waiting to have a discussion. Given our tax issues — or perceived tax issues­­ –– we shouldn’t be ruling anything out before discussing it.”

Board member Bill Cooke changed his mind after initially supporting the residential exemption, but not a split tax, during his first run for Selectboard last spring. He told The Edge that it was a difficult decision, but after spending “a lot of time with assessor Chris Lamarre,” he was convinced that it was risky, partly because it is hard to pinpoint exactly how many residents could take the exemption, thus making it difficult to know how high to set the rate.

Cooke also cited the annual application process and the money required to maintain that, as well as his concern about the effect on renters, whom he hoped were taking advantage of a state income tax exemption for rent.

“But if some of the details [of the exemption] could be worked out, it might be reconsidered,” he added. “I still think we need to address the issue of affordability. The service economy is not going away no matter how many entrepreneurial people come into town with their associates…I really feel we have to make sure that the people who work in the stores and nursing homes can afford to live here.”

At Monday’s meeting, Stanton got right to the point. Based on everything he had seen and heard of the proposal he said, “It’s not right for Great Barrington, and at least for the immediate future we don’t need to continue the conversation.”

Yet people still wanted to talk about their opposition to it.

Chip Elitzer began by complementing Wise “for being an enormously good sport” at last week’s finance committee hearing, but wanted to reiterate his objections to a residential exemption over the impact it would have on renters, particularly in Housatonic, where renters occupy 43 percent of homes. The impact on renters would be caused, Elitzer said, by landlords passing on tax increases to their tenants.

Stanton tried to stop him. “We’re not going down that road, so now you’re talking to hear yourself speak.”

Elitzer was undeterred, pointing out 81 percent of those Housatonic renters are paying more than 35 percent of their income on rent. He later told The Edge that he wanted to make sure that Abrahams heard his point about renters, since Abrahams had to leave early from last week’s Finance Committee hearing.

Joel Millonzy needed to have his say about the “elephant” of the town’s higher burden of regional school costs. “The town is very frustrated,” he said.

But the Board had an answer for him. Stanton said that all three towns in the Berkshire Hills Regional School District have agreed to form a committee to look at the district agreement that determines how much each town pays to run the schools. That committee, he added, is being formed. Stanton said he hoped that the some of the “very smart people in this room” would volunteer to help.

Stanton said getting Stockbridge and West Stockbridge, the two other towns in the district, to agree to a committee is “a big step because they didn’t have to.”

It was the result of public pressure to change the agreement for more favorable terms to Great Barrington, which is paying about 70 percent of school costs. Each town pays according to the number of children enrolled from each. That pressure started after Great Barrington voters, two years in a row, refused to pay for a renovation to the deteriorating 50-year-old Monument Mountain Regional High School.

“One of the steps is going to be convincing our neighbors that the right thing to do is to change the way in which the agreement is structured,” Stanton noted. “That’s going to take a lot of work.”