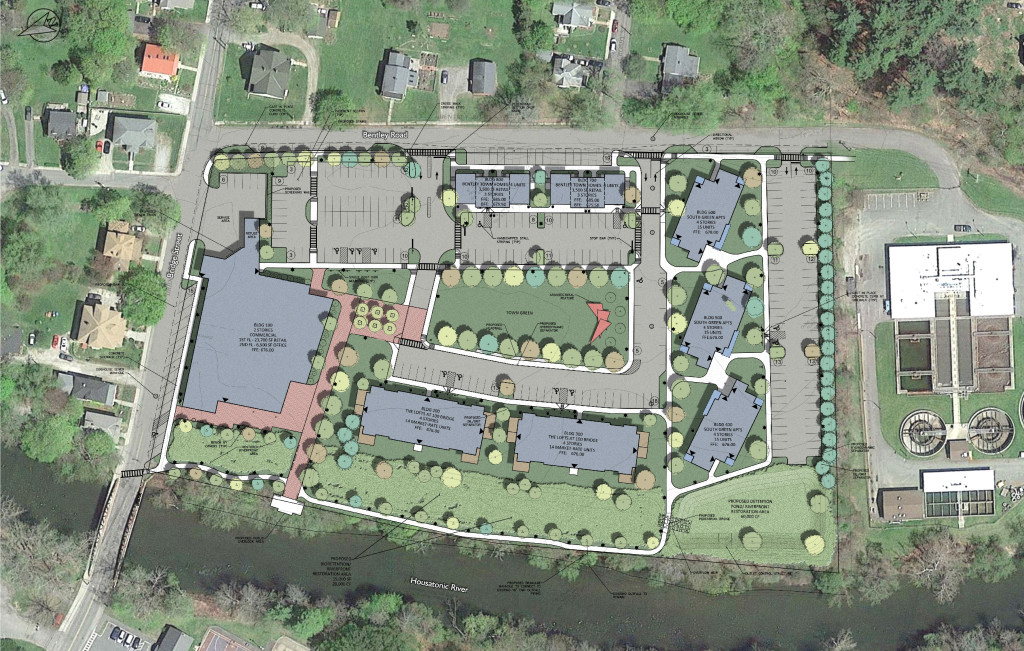 Great Barrington — The former New England Log Homes site on Bridge Street could be a slice of primo real estate in the heart of town.

But for 100 years it was used for manufacturing, and permeated with its final — and worst — contaminants, pentachlorophenol (PCPs) and dioxins, by the New England Log Homes Company.

Then there is the wastewater plant at its rear border, emitting, nearby residents say, a low but audible sound and occasional bursts of miasma.

But the land still has its location; it’s a short walk to downtown, and the Housatonic River flows along its western border.

Several years after New England Log Homes closed down, Community Development Corporation of South Berkshire (CDC) got hold of the land for $1, and CDC Executive Director Tim Geller has been trying to clean up the pollution and develop the site ever since.

Geller came to the Selectboard Monday (June 27) looking for a recommendation to the Zoning Board of Appeals (ZBA), which has kept its hearing for a comprehensive permit open for just the affordable housing element of 100 Bridge, the proposed larger development that would include retail, offices, market rate housing and open space. Geller showed slides of the many incarnations of the CDC’s plans for the site over the years, in an attempt to show the board just how far things have come. He also showed the board photos of the site after a fire in its remaining structures 10 years ago left heaps of charred refuse, making the land a centerpiece of blight in what is also a residential neighborhood.

Now there is the possibility of a renewal that may not please everyone, but beats the shaggy toxic field of the present, and all told is estimated by the CDC to throw off $400,000 in tax revenue to the town.

Though the plan to secure an anchor tenant and developers for the larger project remain the same as they have been for the last two years — with the same levels of risk — a permitting strategy that splits off the affordable housing permit from the rest of the development has both ZBA and Selectboard members confused and concerned.

At a ZBA hearing two weeks ago, concerns flared over the proposed 45 affordable housing units backing up against the wastewater plant on one side, and polluted soil on the other. The soil must be capped, or encased, by digging up the toxic top layer, moving it around, and adding clean dirt. Geller says it will have to be done all at once across the site. That alone is now being puzzled over by engineers and the Department of Environmental Protection, which has oversight of the brownfield. It is this soil remediation that has been the mightiest obstacle so far, with one heroic but failed attempt at a novel bioremediation project that, for questionable reasons, was shut down by the state last year.

Geller said the capping project would have to result in “zero” human exposure. And MassDEP, he said, will apply its “S-1 standard” of contamination levels that the agency says are acceptable for “residential use, parks, playgrounds and schoolyards.” The affordable housing and restored river area will have to comply with that standard. The rest, Geller previously told the Edge, will end up paved with the contaminated 12 to 18 inches of soil from the other areas under it.

“It all has to pass soil tests at the end of day,” he said, adding that for financing, it is “easier to finance the acquisition of a remediated site.”

Board members struggled to make a recommendation, though at an earlier meeting they had listed conditions that the aesthetic of the housing be “coherent,” and that there be protections from pollution for the affordable housing residents, since there is a possibility that housing might go up before anything else.

On that note, Town Manager Jennifer Tabakin said she was “concerned” about the lack of “commitments” from other developers and an anchor tenant. The Berkshire Co-op Market and CDC have talked for several years about the Co-op expanding there, but the Co-op says it is still looking at all its options.

This was Geller’s second meeting in which he explained that nothing has changed.

“The only difference we have here is a difference in permitting strategy,” he told the board. “It came down to financial ramifications.”

Those ramifications have to do with the state’s oversight of affordable housing, since it will be constructed with state money, and the state puts limits on those profits. If applied to the entire site, he said, the state would be controlling the whole development. “That’s not gonna fly with developers,” he said.

And the only reason he is even seeking a special permit, he noted, was because the development is more than 20,000 square feet. 100 Bridge sits in a zone that allows precisely this type of mixed-use affair with standard permitting, he said.

There were some tentative responses and confused looks from the board. Various development controversies along the Castle and Bridge Streets corridor over the last year may be to blame.

Board chair Sean Stanton wasn’t sure about the whole package. “The idea of bringing this into a residential neighborhood is hard for me to swallow,” he said. “So many things that have happened…things we bet on and lost. I haven’t seen much activity on [The Berkshire] hotel down here. There are so many unknowns.”

Stanton was referring to the former Searles School across the street from the site, which a hotel developer plans to turn into an upscale hotel.

At one point Stanton questioned the need for housing, and Geller said the town has said it is vital. It is part of the town’s Master Plan.

And Geller explained that zoning at the site allows for 139 total housing units, including the market rate housing. “We only did 81,” he said.

Vice Chair Steve Bannon was worried “a suitable local tenant” might not be found.

Tabakin asked Geller why there was such a rush to push the affordable housing permitting through. “It doesn’t seem quite ready to go,” she noted.

Geller has explained at previous meetings, however, that the CDC must take its place in the state funding queue that begins this winter, but first it needs permits.

Bannon said he was reluctant to make a recommendation to ZBA because of all the unknowns about the rest of the site, though Geller kept reminding the board those unknowns have always been there.

Tabakin said she was “pushing” the board a bit for a decision, noting that the promise of 100 Bridge leveraged $700,000 in Community Preservation Act funds for the CDC over the last two years for several aspects of the project; $1 million was just approved to fix the Bridge Street bridge; and the town was awarded a $2.1 million MassWorks grant last year to upgrade Bridge Street infrastructure. “We’re in this,” she said. “This has to be a project that is meeting your goals and objectives…this is the time.”

Bannon said he wanted the board to ask the ZBA to postpone their vote “until we have time to put together a thoughtful list of conditions…this is rushed.”

But Dan Bailly said “not a whole lot has changed…we can’t tell someone what to do with the rest of the property. All we have a say in is the affordable housing. The other six acres are unknown.”

Ed Abrahams said he was ready to vote on a recommendation, with some conditions.

“We really don’t know anything except what the 40B [affordable housing] is going to look like,” Bannon said.

“Nothing has changed,” Geller said. “That indeterminate aspect has always been there.”

“It’s only a site plan,” Tabakin said. “Things happen and come up.”

But Tabakin and Bannon brought up an issue that has made some community members wince: the proximity of the affordable housing to the wastewater plant. And Tabakin further wondered how market-rate housing with a view of the tanks would go over. Bannon said he was worried that at some point, people might complain of segregation. “I can hear someone say, we really want you to blend the market rate and affordable housing.”

Geller said this “environmental justice” issue floating around town is something he is most “distressed” about. He said he envisioned 100 Bridge as an “exceptional place to live,” since it is walking distance to downtown and jobs, and some residents, he said, might even work at the hotel proposed for the other side of the street.

“It triggers something in me,” he added. “If environmental justice was an issue at this site, we wouldn’t have a relatively affluent population to the east. We’re actually doing the opposite: cleaning up the site, getting rid of contamination, and including [affordable housing] in a relatively affluent [location].”