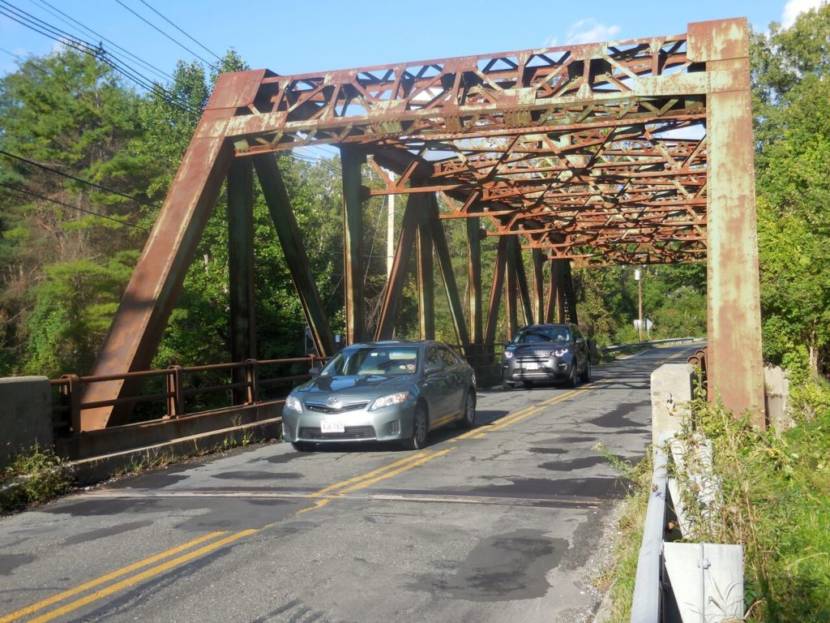 The Division Street bridge in happier times. Its closing, along with a number of other road-related concerns, were on the minds of residents at Monday's Great Barrington Selectboard meeting. Photo: Terry Cowgill

Great Barrington — Residents and business owners Monday expressed considerable anxiety to the selectboard about the traffic situation in town, which they insist is being made worse by the recent closure of two key bridges over the Housatonic River, and with the partial closure of another perhaps in the offing next spring.

At Monday’s board meeting at the Claire Teague Senior Center, concerns ranged from traffic, speeding, and the impact the closure of the Division Street and Cottage Street bridges are having on businesses and residents alike. One businessman and farmer, Dan Tawczynski, described his losses as “untenable.”

“Houston, we have a problem,” Tawczynski said, paraphrasing the famous words of an astronaut in the ill-fated Apollo 13 space mission. “A major problem called ‘that bridge.'”

Tawczynski, who, with his family, owns Taft Farms, a popular farm and store at the intersection of Route 183 and Division Street, said business at his store has decreased by 38 percent on Mondays through Thursdays since the Division Street bridge closed the second week of September.

See video below of Dan Tawczynski weighing in on traffic and the bridge situation in town and the effect they’re having on his business (his remarks begin at 5:14):

Tawczynski suggested a temporary bridge be installed. He even offered to let the town use his land on the east side of the river, though he could not offer the land on the west side because he does not own it.

The highly traveled Division Street runs east and west, and connects routes 41 and 183 just south of the village of Housatonic. Barriers and detour signage were installed to alert drivers. The bridge remains open to pedestrian and bicycle traffic.

A little more than a year ago, the state Department of Transportation deemed the bridge “structurally deficient” after a July 2018 inspection revealed deteriorated steel stringers.

Voters subsequently approved a $4 million bond at the 2019 annual town meeting to fund significant repairs or a complete replacement of the aging steel-truss structure, which was originally constructed in 1950.

Town Department of Public Works chief Sean VanDeusen has characterized Division Street as “one of the busiest streets in town,” in part because motorists use it to avoid downtown Great Barrington or the busy commercial corridor of Stockbridge Road. A 2013 report estimated average daily traffic for the bridge of 5,400, which is a lot of vehicles for such a small span. Trucks, the report said, accounted for 6% of total traffic.

Though the state closed the bridge, it is a town-owned structure, so the town itself is responsible for repairs or reconstruction. Town officials have said it is unclear what the total cost of repairs or replacement of the bridge will be and what the timeline for closure will look like.

Tawczynski also wondered what might happen when the Brown Bridge undergoes repairs next spring. The Brown Bridge spans the Housatonic River and connects State Road (routes 7 and 23) with Route 41 where Domaney’s and the “GB” shrub are located.

“Right now you have lines on any given Saturday,” Tawczynski said. “You might have a line of traffic all the way out [Route 7] to Jenifer House Commons. Where is that line going to end if you go to one lane?”

Tawczynski said the closure of the Division Street bridge means potential customers have to drive as much as 8 miles out of their way to get to Taft Farms.

“My son is in the process of taking over the farm,” Tawczynski explained. “He has ambitious plans, all of which are on hold until this situation resolves itself. A 38% loss of business is untenable. I beg you: Consider reopening the bridge for light traffic only.”

Bannon emphasized that it was MassDOT that closed the Division Street bridge, so irrespective of safety concerns, town officials cannot simply reopen it, no matter how much they might like to.

Ironically, Klas Bergman, who has lived at 89 Division St. since December, said the bridge closure has resulted in less truck traffic in his neighborhood. Nevertheless, Bergman said he is troubled by the two bridge closings, which he called “scandalous,” adding that they should be viewed as “an emergency.”

See video below of the remarks of Klas Bergman, Geoffrey House and Denise Forbes:

“Bridges and infrastructure are the essence of running a city or a town, and if you can’t fix those things, then every citizen here will be negatively affected,” Bergman said. “It’s a major issue for the town to deal with.”

Division Street resident Michelle Loubert also complained of “large commercial trucks” speeding on Van Deusenville Road and North Plain Road, which she described as “a tragedy waiting to happen.” She further observed that many cars proceed down Division Street “at a high rate of speed” because they haven’t bothered to notice the large orange bridge-closure signs.

Hurlburt Road resident Geoffrey House was concerned that the state might close the Brown Bridge anyway and perhaps without much warning, as was the case with the Cottage Street and Division Street bridges.

“If they close the Brown Bridge down, it basically would end up being a dead end street,” House said. “What would that do to businesses in town? There’s no place for trucks to go, no place for anybody to go.”

Bannon and Pruhenski again emphasized that MassDOT had no plans to close the Brown Bridge when repair work begins this spring, but that there might be periodic one-lane closures during construction.

An actual closure of the Brown Bridge would force a high volume of traffic onto East Street, which parallels Main Street, and onto the Bridge Street bridge, which was recently rehabilitated and is in good shape.

The Cottage Street bridge, which could be used to accommodate some of the diverted traffic, was closed earlier this year. It could be closed for as long as five years because of a funding issue. The situation is complicated, as a temporary fix could pose problems. Click here for background.

House also complained about the controversial roundabout MassDOT is planning for the intersection of routes 7, 23 and 41 near the police station. House said he has never heard anyone complain about the existing intersection and suggested the state’s plan was entirely unnecessary.

Bannon urged concerned residents to continue to report speeding and safety problems to the police. He indicated the board would have updates on town bridges at its next meeting Monday, Nov. 4.