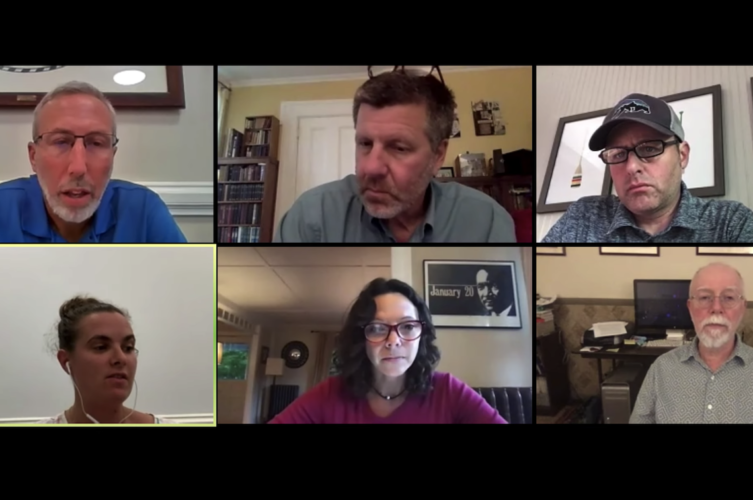 Great Barrington — In the wake of the police killing of George Floyd, the rise of the Black Lives Matter movement and nationwide demonstrations demanding racial justice, calls for the reforms of police department procedures have increased substantially.

Great Barrington is no longer an exception. At Wednesday night’s virtual meeting, the selectboard was presented with a list of possible reforms, including the formation of an independent civilian oversight board to investigate violations of the town’s Trust Policy.

The proclamation was offered by selectboard member Kate Burke. Click here to read the proclamation, which states that the town should recognize that “systemic racism is a threat to public health and safety.”

See video below of last night’s Great Barrington Selectboard virtual meeting. Fast forward to 19:25 for the discussion on Burke’s proclamation:

In addition to a civilian oversight panel, the statement calls for controversial measures such as the reformation of hiring practices, the ending of Great Barrington’s participation in federal programs that distribute military weaponry, the beginning of negotiations with the department to equip its officers with body cams, and state action to “address the deficiencies” of a civil service system that critics say makes it difficult to discipline or fire officers who perform poorly.

Burke said her proclamation was based on one passed last month by the city of Somerville, near Cambridge. According to Somerville Mayor Joseph A. Curtatone, his city’s initiative was drawn from policy platforms developed by Campaign Zero, a nonprofit police reform group, and a 10-point plan released last month by U.S. Rep. Ayanna Pressley, D-Boston, and other elected officials of color in Massachusetts.

Walsh asked if Burke’s proclamation was the same Trust Policy the town had adopted earlier. That policy was passed by an overwhelming margin at the annual town meeting in May 2017 but had been months in the making.

At that time, Great Barrington joined North Adams and Pittsfield in adopting the policy, which designated the town “a safe and inclusive community” that will not enforce federal immigration law or “aid in the detention, transfer, transport or deportation of residents for civil immigration purposes.”

Walsh did not offer any specifics but in January 2018, federal officials from Immigration and Customs Enforcement took a local worker into custody in front of the popular Fuel coffee shop on Main Street.

Great Barrington police did not participate in the arrest but, when asked by ICE, a Great Barrington officer did retrieve the detainee’s medication from his apartment after the detention had been executed. Great Barrington resident John Breasted later alleged that low-level cooperation with ICE ran afoul of the town’s Trust Policy, an accusation that Walsh heatedly denied.

“Without disagreeing with any of this, I’m concerned that we don’t know if this [proclamation] needs to happen,” said selectboard member Ed Abrahams. “Some of this may already be happening.”

Abrahams said, often when people tell him the board should be pursuing certain policies, especially those that involve transparency, he has to inform them that the board is already doing so.

Selectboard member Leigh Davis, whose father Lloyd was a prominent civil rights leader, thanked Burke and said the document was a “great first step and badly needed.” Davis works with the Berkshire branch of the NAACP and said the organization is working on a soon-to-be-published op-ed that “touches on some of the items” in Burke’s proclamation.

“It’s talking about ending police violence and demanding both accountability and justice, and it goes quite into some depth on some of the things that they are suggesting,” Davis said.

Davis offered to help revise the document, adding and deleting as necessary, so that it could be ready for the board to discuss further at its next meeting on July 13.

I don’t want this to be taken as a criticism of the police,” Bannon said. It’s continuing the high standards that we have and making sure that we continue to improve as a town and as a police force and as a selectboard.”