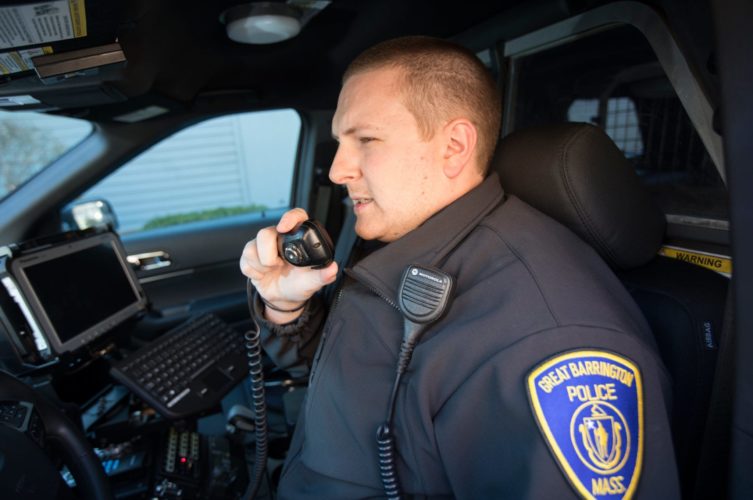 Great Barrington — The Great Barrington Police Department is now only one of two departments in Berkshire County with an officer certified to identify drug-impaired drivers.

Officer Christopher Peebles traveled earlier this year to Franklin, Massachusetts, and Maricopa County, Arizona, for training to become certified as a drug recognition expert (DRE), or a law enforcement officer trained to identify people whose driving is impaired by drugs other than, or in addition to, alcohol.

“As marijuana has been decriminalized and with the advent of marijuana shops, for a while it’s been a concern in law enforcement — how do you prove or prosecute driving under the influence in drug cases?” Great Barrington police Chief Bill Walsh told the selectboard at Monday night’s meeting via Zoom.

Great Barrington has Berkshire County’s first recreational marijuana store, Theory Wellness, which opened its doors in January 2019. Several others in Great Barrington will open soon or are in the licensing phase with the state Cannabis Control Commission. The Pass recently opened in Sheffield and Canna Provisions opened last year in Lee.

Most police officers have basic training in detecting drivers who are under the influence of alcohol, but marijuana presents challenges. Alcohol impairs the motor skills and reflexes needed to operate a vehicle safely. In addition, speech and balance impairments can be easily detected in a field sobriety test. A driver who has been partaking in cannabis does not exhibit such obvious symptoms.

Walsh said DREs, all of whom must complete intensive training in the Drug Evaluation and Certification Program to become certified, are trained to recognize an individual who has been driving under the influence of drugs and determine which category of drugs is causing the impairment. There are currently 160 certified DREs in Massachusetts. Peebles joins Sheffield police officer Brennan Polidoro as the only two DREs in Berkshire County. DRE certification is good for a period of two years.

Interestingly, it was Polidoro who pulled over former Great Barrington officer Daniel Bartini on suspicion of drunken driving in 2016. Two and a half years later, Bartini was arrested by state police on the Mass Pike for driving under the influence. Bartini later resigned from the force.

“It’s a great credit to him,” Walsh said of Peebles. “It really puts us ahead of the curve on this issue … which is becoming more and more prevalent as the marijuana issue continues to expand across the land.”

The DECP was developed by the National Highway Traffic Safety Administration and approved by the International Association of Chiefs of Police. The Massachusetts DECP was initiated in 1995. Upon completion of their initial training, officers are certified as DREs and become far more effective in identifying drug-impaired individuals, Walsh said.

Peebles spent two weeks in Franklin, followed by another week in Arizona. The cost of Peebles’ training, travel, meals and hotel stays were covered by a grant. In addition, Peebles’ services are available to other South County towns. If he is called out during his regular shift, which is from midnight to 8 a.m., towns can receive Peebles’ services free of charge. For his services outside those hours or for court appearances, those departments would be charged to cover Peebles’ overtime.

“In our annual letters to our neighboring towns about dispatch and lock-up fees and breathalyzers, we have informed them that this service is available to our South County towns, but any cost involving overtime, they’d be responsible for,” Walsh explained.

According to the International Association of Chiefs of Police, the Los Angeles Police Department originated the DRE in the early 1970s when LAPD officers noticed that many of the individuals arrested for driving under the influence had little or no alcohol concentrations.

“The officers reasonably suspected that the arrestees were under the influence of drugs, but lacked the knowledge and skills to support their suspicions,” the IACP states. “In response, two LAPD sergeants collaborated with various medical doctors, research psychologists, and other medical professionals to develop a simple, standardized procedure for recognizing drug influence and impairment.”

Their efforts culminated in the development of a 12-step protocol and the first DRE program. The LAPD formally recognized the program in 1979. DREs have been trained to observe myriad “indicators” of impairment in one of seven categories: central nervous system depressants; CNS stimulants; hallucinogens; dissociative anesthetics; narcotic analgesics; inhalants; and cannabis, which includes cannabinoids and synthetics such as Dronabinol.

“I am very proud of Officer Peebles’ successful completion of the very challenging and difficult drug recognition expert program,” Walsh said. “The deployment of this officer with his knowledge, skill and expertise in the area of drugged driving detection will certainly increase the overall safety of the motorist traveling throughout the town of Great Barrington.”

In some jurisdictions, the expertise and effectiveness of DREs have been called into question. Three motorists were pulled over by police in Cobb County, Georgia, and despite their protestations to the contrary, were determined by a DRE to be stoned, but were later cleared by negative blood tests. All had been arrested by the DRE, charged with DUI and spent the night in jail.

With the help of the Georgia ACLU, those plaintiffs later filed a federal lawsuit in 2017, arguing that the DRE’s judgments were arbitrary and subjective.

According to Reason magazine, “The ACLU argues that the Cobb County Police Department licensed, endorsed, and encouraged such pseudoscientific methods, allowing officers artificially knighted with ‘Drug Recognition Expert’ status to falsely believe that they have a special and unique ability to detect marijuana use.”

The impetus in the Massachusetts law enforcement community for more DREs is clear. In 2017, the state Supreme Judicial Court ruled that a police officer who is not qualified as a drug recognition expert may not testify that he believed a motorist arrested for OUI was under the influence of marijuana.