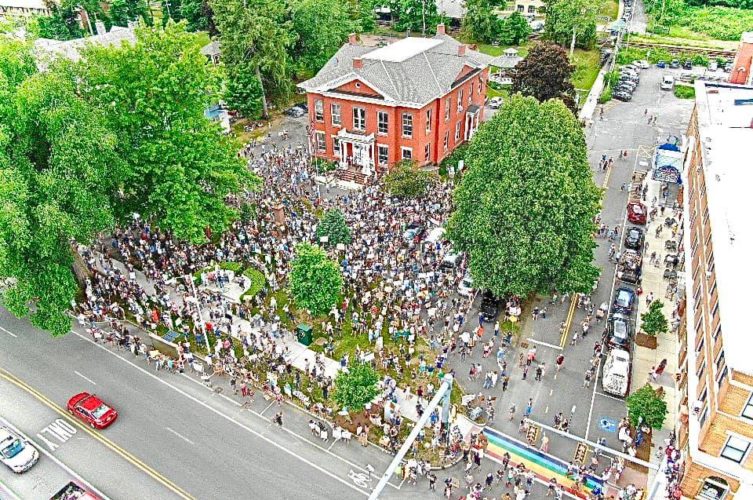 Editor’s Note: This story has been updated with new images; an EdgeCast video by Ben Hillman is now a separate item in its own right.

Great Barrington — There’s nothing like a tragedy to bring a community together. The brutal killing of African American George Floyd at the hands of a white police officer in Minneapolis last month has mostly united the people of Berkshire County and the nation against racism and police brutality.

That much was evident in Great Barrington Monday night (June 8) at the selectboard’s regular meeting, held virtually because of physical distancing guidelines issued during the pandemic. Only two days earlier, a peaceful #BlackLivesMatter demonstration had attracted more than 1,000 people to town.

Protestors listened to speakers in front of Town Hall and at one point, they marched, knelt and sat on Main Street, halting traffic as they paused in silence to honor the memory of Floyd and others who have been the victims of unjustified police violence.

The event did turn tense at one point when dozens of protesters marched to Great Barrington police headquarters and demanded answers. About half a dozen police officers listened patiently but said little as some of the protestors shouted at them.

Longtime police Chief Bill Walsh told the board his department was an early adopter of the principles enunciated in President Obama’s Task Force on 21st Century Policing. In addition, Walsh said his officers are trained in the skills of defensive tactics and de-escalation, or diffusing tense situations such as the sort that came about on Saturday in front of the station.

“What happened to Mr. Floyd in Minneapolis was totally disgraceful. It was hard to watch,” Walsh said. “It was not necessary and never should have happened  … 98 percent of our police officers in this country are hardworking and dedicated every day. They care about their communities. They serve and protect, and certainly they are in Great Barrington.”

Selectboard member Leigh Davis, who spoke at the rally and whose late father, Lloyd Davis, was a noted civil rights leader, commended the department for its handling of the events that day and for its “measured approach” in dealing with the attendees.

“Thank the Great Barrington Police Department for handling the situation with dignity and honor with the amount of people gathered,” Davis said. “They were passing out masks, and just in general, I received a lot of really wonderful compliments directed towards the police.”

Davis added that it was a very emotional day for her but that “it was a wonderful example of our community coming together to support a movement that I hope does not stop … I’m really proud to be a member of this community, so thank you very much.”

“As Leigh said, in Great Barrington, the police have done an incredible job over the years and I think Chief Walsh is to be commended in his work in propelling our force with a really forward momentum,” added board member Kate Burke. “I think Great Barrington has set an example by what a community can do moving forward.”

Board Chairman Steve Bannon read a statement in which he acknowledged that it “will take a lot of work and reflection to finally rid us of the stench of racial inequality. I know I am ready to admit my faults and to work for a solution. The citizens and leaders of the Town of Great Barrington are ready to do their part.”

Great Barrington was an early adopter of the six pillars of 21st Century Policing, which President Obama initiated after a previous police killing of a black man in Ferguson, Missouri: building trust in the community; policy and oversight; technology and social media; community policing and crime reduction; training and education; and officer safety and wellness. Information on all six can be found on the department’s website.

Walsh himself traveled to the White House in August 2016 to discuss the program. “We were on board with this initiative right from the very beginning,” Walsh said.

In addition, in 2016, the Great Barrington Police Department became the first and only department in Berkshire County to become accredited by the Massachusetts Police Accreditation Commission.

“We have a committee on the police department working on these six pillars for the last four years, an internal police committee” Walsh explained. “We meet every couple of months to see what we’ve done, where we want to go. We keep adding to our list and we’ve been very transparent about what we’ve done.”

In the recent past, the Great Barrington Police Department’s problems have had more to do with alcohol than anything else. An Edge report from four years ago revealed “a pattern of excessive and frequent drinking.” Most recently, Officer Jonathan Finnerty is scheduled to be arraigned on July 22 for OUI after being taken to Berkshire Medical Center for a medical evaluation.

Last year, Officer Daniel Bartini was taken into custody by Massachusetts State Police in Westfield, was booked for OUI and bailed out by Finnerty. Bartini was involved in another drinking and driving incident in 2016. That same year Officer Ryan Storti died after crashing his car into a tree in Stockbridge. Witnesses said Storti was highly intoxicated at the time.

Nevertheless, the department remains respected. Board member Ed Abrahams noted that all five members of the selectboard attended the demonstration. Walsh was there, too, listening patiently to the complaints of protestors outside the department’s headquarters.