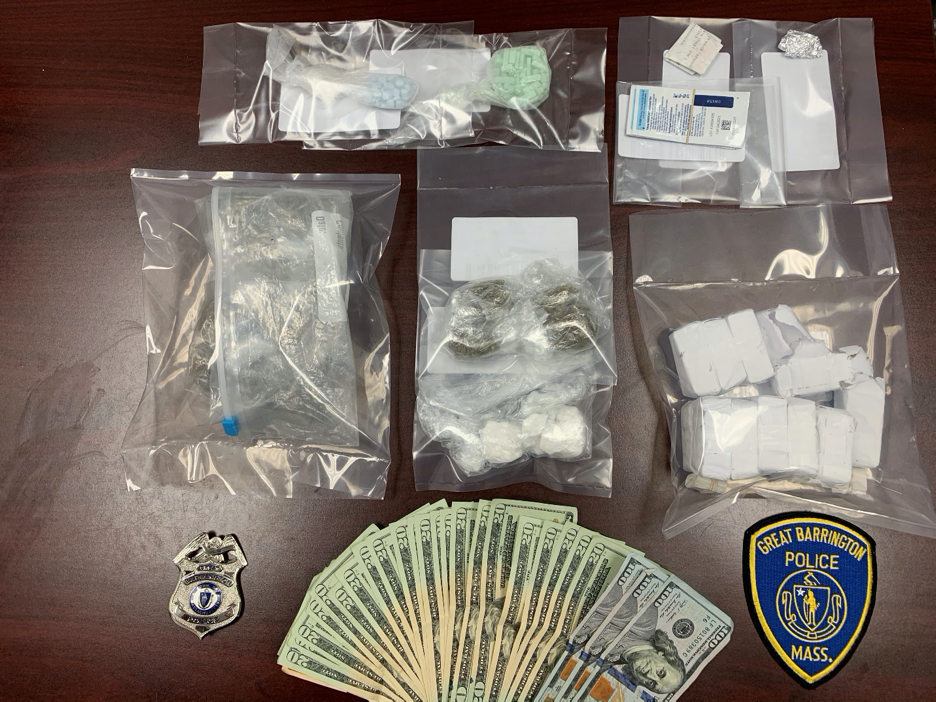 Great Barrington — Officer Andres Huertas, while on patrol around 10:30 a.m. on May 6, noticed a vehicle operating on Main Street. Huertas happened to know that the operator had a revoked license, Chief Bill Walsh said in a statement Wednesday afternoon.

Huertas stopped the vehicle in front of Town Hall, as Officer James Bragdon assisted with the stop. Huertas told the driver, Ryan P. Babcock, 34, of Park Street in Housatonic, that he was being placed under arrest.

During an inventory of the vehicle, Huertas discovered what Walsh described as “an extremely large cache of narcotics.” The car was then impounded and taken to the police station where a search warrant was obtained. Assisting police officers Christopher Peebles and Bradley Lupiani helped with the search, warrant process and “the over-all arrest and investigation,” Walsh said.

The inventory revealed 748 bags of heroin, several bags of cocaine, 18 bags of marijuana, several different prescription drugs and $2,700 in cash.

Walsh said Babcock was arraigned via a telephone conference call from his cell due to COVID-19 restrictions and the court being closed. Judge William Rota held him without bail until a further hearing in Southern Berkshire District Court on Thursday.

“This was an outstanding motor vehicle stop and arrest by Officer Huertas,” Walsh said. “It removes a major player in the drug trade from circulation once again, noting Babcock’s lengthy criminal record. That’s a huge amount of heroin taken off the streets and all of the officers did a commendable job.”

Babcock is no stranger to area police. In a plea deal struck in 2015, Babcock, then of New Marlborough, pleaded guilty to possession of cocaine and oxycodone with intent to distribute and was sentenced to three to four years in the Massachusetts Correctional Institution at Cedar Junction.

Babcock had at least one other serious brush with the law. He was one of 19 suspects arrested in 2004 in a now-famous police sting in Great Barrington. Babcock, then 20, subsequently pleaded guilty to three counts of distribution of cocaine, two counts of selling drugs in a drug-free school zone, one count of conspiracy to distribute drugs and one count of possession of marijuana. He was sentenced to serve four to six years in prison.

The drug sweep became an issue in the 2006 race for Berkshire district attorney when Great Barrington lawyer Judy Knight, who had represented another young defendant in the sting, Kyle Sawin, unsuccessfully challenged incumbent DA David Capeless, who had made getting tough on drugs something of a professional crusade.

Babcock was arrested again in 2013 after his girlfriend’s mother had called the department concerned about her daughter’s safety in a parked vehicle in Housatonic. After officers arrived, Babcock was ordered to get out of his car and refused. Five officers were reportedly needed to pull Babcock out of his vehicle, subdue him and slap the cuffs on him.

After finally being taken into custody, Babcock was taken to Fairview Hospital. He later filed a federal lawsuit against a Great Barrington police officer, Fairview Hospital and three doctors who work there, alleging he had been beaten and accusing the physicians of medical malpractice. The suit was dismissed in 2017.