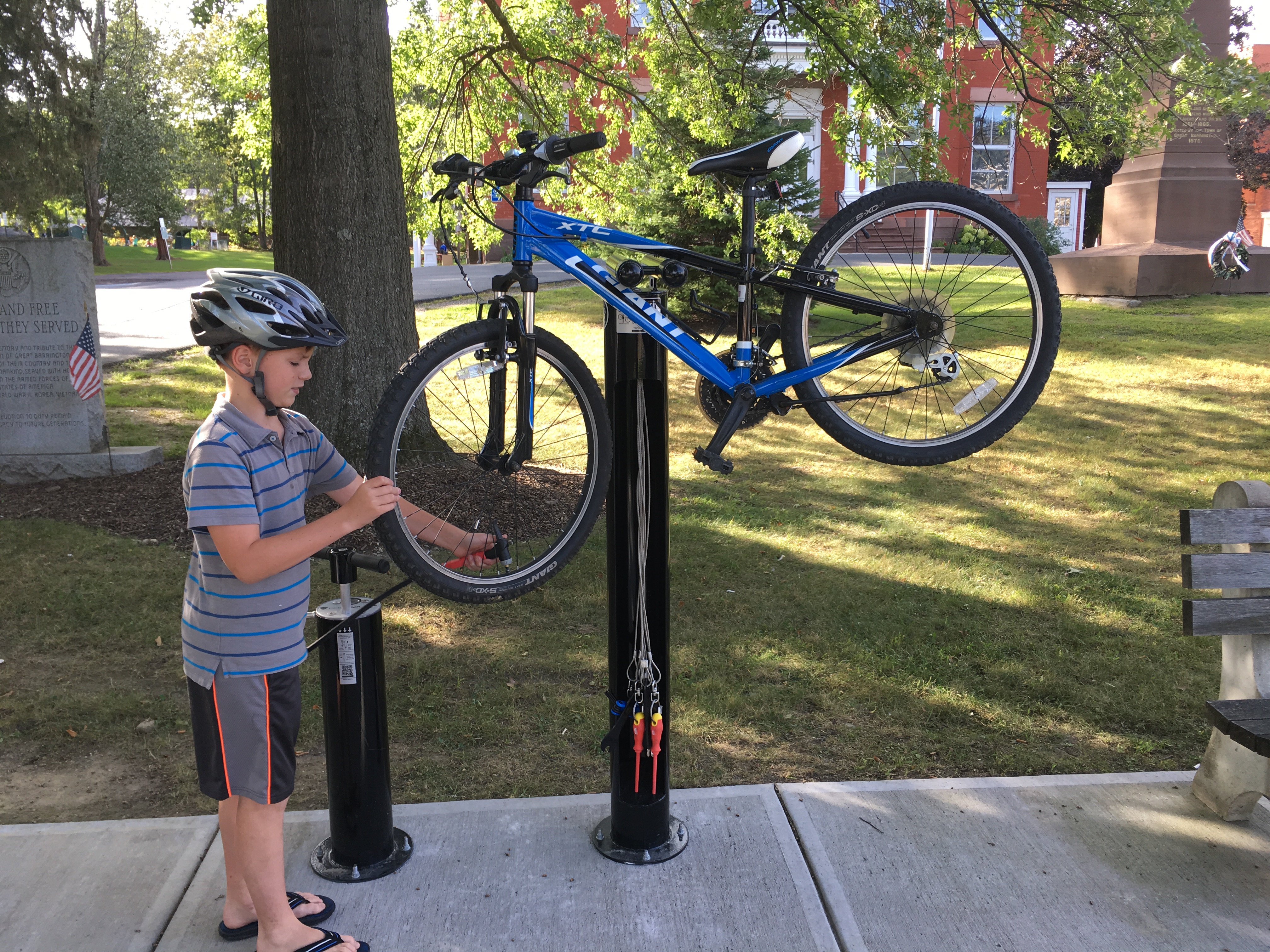 Great Barrington – On the sidewalk in front of Town Hall is a new installation that suggests a different approach to getting around town. Next to the pedestrian bench is one of the county’s two DERO Bike Fix It Stands  consisting of a cylinder air pump and a hefty pole from which dangles a set of tools suitable for minor repairs and from which a bicycle rack can be extended. It is the latest conspicuous element in the process of making the town a more bike-friendly community.

The new fixture is the brainchild of Karen Smith, chair of the Park and Recreation Commission and an avid bike rider who regularly commutes between town and her home on Monument Valley Road.

When she was in Holland last year, she explains, she was astonished with the way in which the Dutch had transformed their intra-city, intra-town transportation network. Instead of relying on cars, everyone – it seemed — young and old, rode bicycles – to work, to the store, to school, to visit friends, for just plain recreation.

As the New York Times reported last week, there are more bicycles now in the Netherlands – 22.5 million – than people – 18 million, and ridership is growing by 11 percent a year. The city of Utrecht, population 330,000, the fastest growing city in Holland, has just opened the world’s largest parking garage for bicycles, with spaces for 6,000 bikes.

With these impressions in mind, Smith returned to the United States with the goal of making her hometown as convenient for cyclists as possible.

“I was amazed by the number of bicycles in Holland,” she said. “Everyone rides. Older people are riding bikes; young people are riding bicyles. There are bikes paths everywhere, and I couldn’t get over how quiet it was. Being bike friendly is a win-win – it’s healthier, there are fewer cars, it’s better for the environment. I decided I wanted Great Barrington to be really bike friendly.” 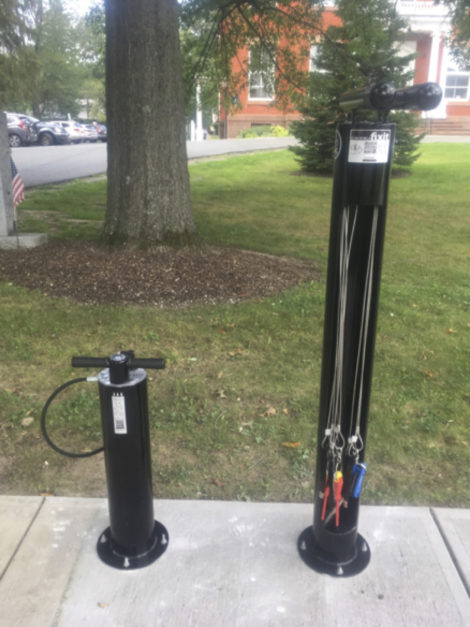 With funds assigned to the Parks and Recreation Commission, Smith persuaded the town to approve the purchase of a DERO Bike Fix It Stand, and have the Department of Public Works install it. The bike stand has a collection of tools that includes flat and Phillips screwdrivers, Allen wrenches, box wrenches, tire levers and a full-service air pump with a gauge. The only other DERO Bike Fix It Stand in Berkshire County is in North Adams. The town of Egremont has ordered one.

“The repair and maintenance station is one of several initiatives we’ve pursued to make the town more welcoming for bicyclists,” Department of Public Works Superintendent Sean VanDeusen observed in a town announcement of the DERO Fix It Stand. “It will be a helpful asset to all of the cyclists in town, and will encourage more people to ride bikes in town.”

To teach cyclists – and would-be cyclists – about these tools of the trade Berkshire Bike and Board will conduct a free clinic at the Fix It Stand on how to fix a bike, fix a flat and fine tune a bicycle at 10 a.m. on Saturday, Sept. 16.

Of course, Great Barrington had begun its journey toward a becoming a bicycle savvy community two years ago during the Main Street Reconstruction Project. The redesign of the main downtown thoroughfare included the designation of bike lanes along the curb-side parking on either side of the reconstructed Main Street.

While this acknowledgement of a mode of transportation other than a vehicle, the bike lanes can also pose a risk to cyclists if a driver opens the car door without checking the sideview mirror for an approaching bike.

“We don’t want cyclists to get ‘doored’ so drivers have to use the ‘Dutch Reach’,” Smith says.

The ‘Dutch Reach’ refers to the method taught in Holland about how a driver is to open the door that swings into traffic. Rather than using the left hand, this method has the driver reach across his or her chest with the right hand to grasp the door latch. In so doing the driver has to turn toward door, thus making it easier to glance in the door-mounted rearview mirror to make sure a bicyclist isn’t riding by.

The Dutch Reach should be familiar, it turns out, to drivers in Massachusetts. The technique is recommended in the Massachusetts Department of Transportation driver’s manual and is demonstrated in the Mass DOT video below:

On Sept. 17, riders from around the region will be on hand for the 41st Annual Josh Billings RunAground Triathlon, which begins in Great Barrington and winds through several neighboring communities.

The ride is designed for experienced road cyclists with minimal support, allowing cyclists to complete as much of the route as they like at a speed they are comfortable riding. Reservations are recommended and can be made by emailing Marge@berkshirebikepath.com.

“I am really excited about all of the ways cyclists can continue to be active this fall,” Town Manager Jennifer Tabakin said. “The rolling hills and country roads in southern Berkshire County make our area a gorgeous place to ride.”