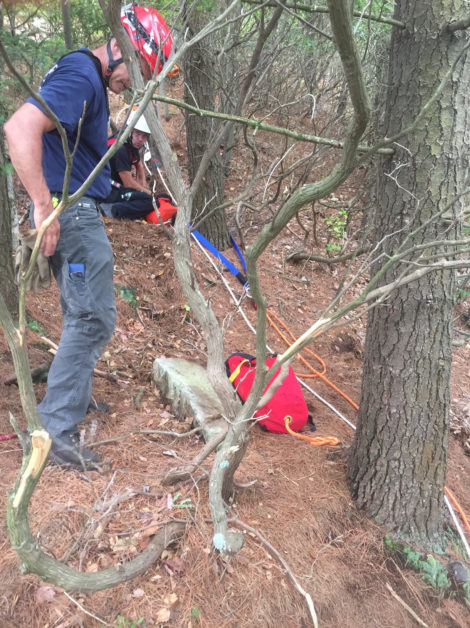 Great Barrington — The Great Barrington Fire Department rescued a 71-year-old man yesterday suffering from severe dehydration at Monument Mountain Reservation and could not make his way back down the mountain, Chief Charles Burger said.

On Wednesday, July 12, shortly before noon, the Great Barrington department, along with Southern Berkshire Ambulance, responded to Monument Mountain Reservation for a report of an ill elderly man at the summit. Upon arrival, first responders learned that the elderly man, who was hiking with his son, had collapsed at the top of the Squaw Peak Trail, Burger said.

Crews reached the hiker within 45 minutes. The man was treated by medics and stabilized. Due to his location on the mountain, he had to be carried across boulders and lowered down steep embankments using rope systems before reaching an area of the trail accessible to UTVs, which were used to bring him down the rest of the way.

Firefighters reached the bottom of the mountain by 2:30 p.m. The man was transported via ambulance to an area hospital in stable condition. All rescue crews cleared the scene by 3 p.m.

“This incident was a good interagency operation between fire departments, the tech team and Southern Berkshire medics who provided exceptional care,” Burger said. “It’s always a good day when we have a successful outcome.”

Since the Great Barrington Fire Department identified mountain rescue as one of the primary ways it can serve the community, firefighters have spent thousands of man hours training in rope rescue and finished 250 hours of refresher training on Monday. Firefighters also raised funds to purchase the UTV for the department, Burger said