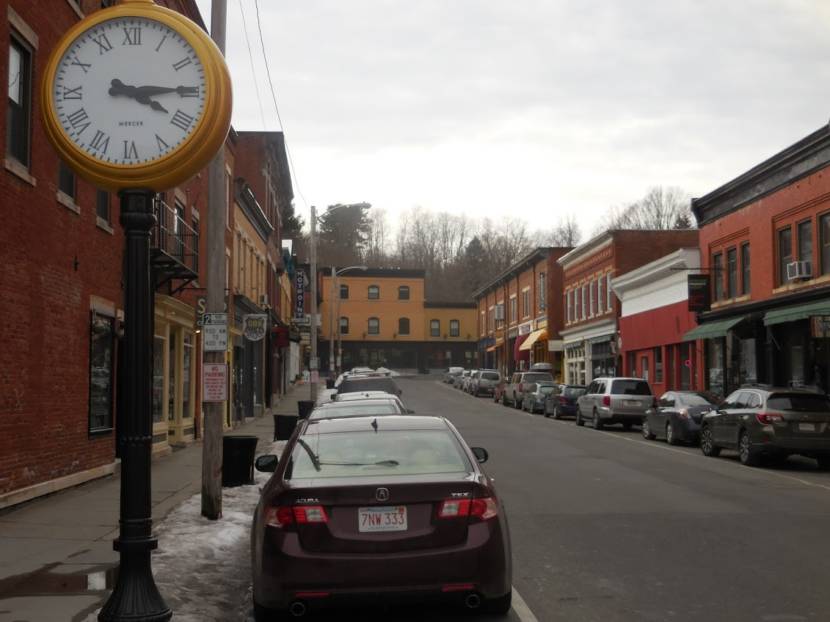 Railroad Street will see a number of improvements during the 2019 downtown street project, including new sidewalks and curbs. Photo: Terry Cowgill

Great Barrington — As spring approaches, work is beginning on what town officials are calling the “2019 downtown street project.” Compared to the massive disruption caused by $6 million Main Street reconstruction project, which concluded in 2016, officials think this one will be a piece of cake.

Town manager Jennifer Tabakin gave an update on the project to members of the selectboard Monday night.

The much-delayed redo of Bentley, Bridge, School, Church, Railroad and Elm streets started this week and will be paid for with portions of a $2.1 million MassWorks grant that was announced with great fanfare in October 2015, when the state’s Assistant Secretary of Housing and Community Development Juan Vega stood on the steps of Town Hall to deliver the good news along with town and regional officials.

This week, mobilization and set-up began for Church, School and Elm streets on Monday (March 11). Actual construction will begin on Monday, March 18, with an expected completion date of Sunday, June 30. The general contractor for the project is Northern Construction Service LLC, which has offices in Palmer and Weymouth.

In most cases, work will begin with the installation of catch basins and drainage project-wide. That work will commence this month—first on Church, School and Elm streets—and run through mid-April.

Sidewalk and curb work will follow, probably during the second or third week of April project-wide, though it’s possible that work on the old sidewalk vaults on the south side of Railroad Street may begin sooner.

On Railroad Street, sidewalk work will begin right after Easter weekend, Monday, April 22, and last about two to three weeks. This includes installation of street lighting conduit and the bases for the new decorative street lights, as well as pouring new sidewalk and curbs. Lighting on Railroad Street will be installed in late May or early June. During April and May, drainage, curb and sidewalk work will continue throughout all of the project streets.

Tree planting is planned for late May, while paving will generally begin in early June project-wide, with the exception of Railroad Street, where paving will begin in mid-June with the adjustment of structures and the milling off of existing pavement. That operation will last one or two days.

Meanwhile other streets will be milled and prepared for final paving. There will be a short time when the roads are a little rough and structures are raised up, so vehicles will need to use caution, Tabakin said.

The final road paving will happen the week of Monday, June 17, and is expected to last two days depending on the weather. Line striping and sign installation will occur immediately after the paving is completed. All work will be done by the end of June.

Tabakin said work will be occur simultaneously on the project, with at least two crews working at the same time on any given day. The schedule is subject to change depending on weather.

In addition, the following conditions will prevail: