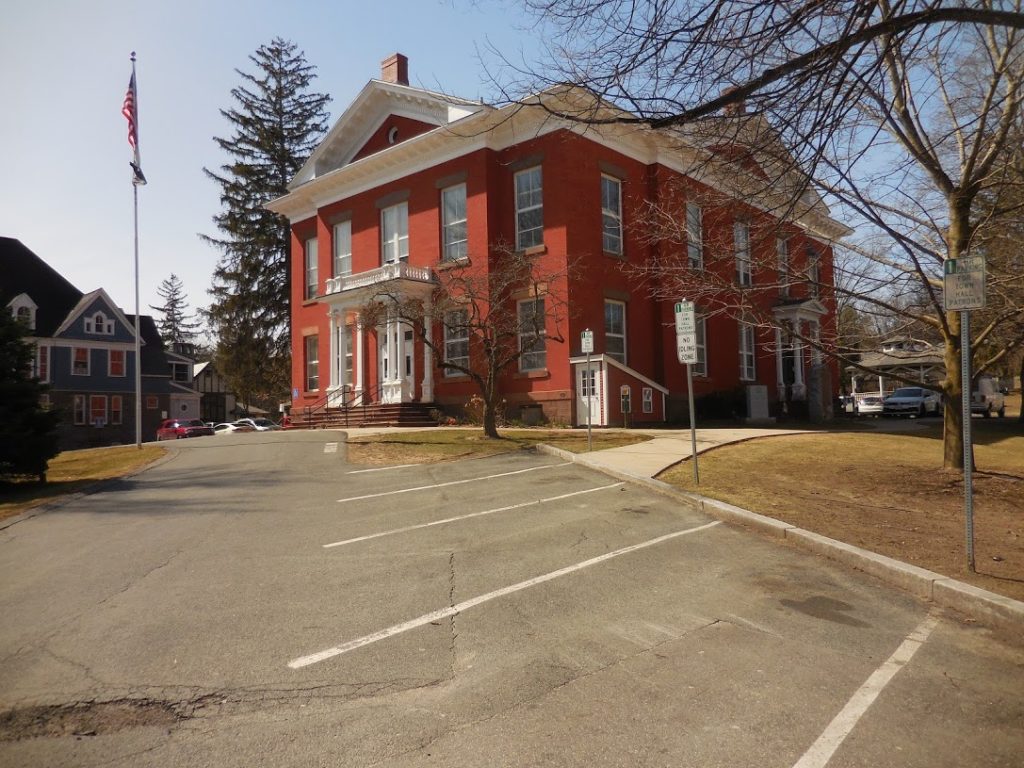 Town government is responsive and continues to function, the town manager and selectboard said at a virtual meeting at Town Hall Monday night. Photo: Terry Cowgill

Editor’s note: This story had been updated to include a link to the video replay of the meeting on CTSB.

Great Barrington — The town of Great Barrington Monday night declared a local state of emergency in response to the COVID-19 pandemic and will likely delay the annual town meeting and the town elections originally scheduled for May.

For the first time in its 259-year history, Great Barrington held a virtual selectboard meeting. Two selectboard members, Chairman Steve Bannon and Vice Chair Ed Abrahams, were present in the Town Hall meeting along with town manager Mark Pruhenski, and were practicing physical distancing. Three others had phoned in to participate, as had numerous other officials and interested residents. The meeting was televised live by Community Television of the Southern Berkshires. Click here to see the replay.

Bannon tried to reassure everyone that town government was functioning and that elected officials were active and town employees were still reporting to work. Click here to read Bannon’s entire statement.

“These are very difficult times for the world, our country, our state and our town,” Bannon said. “We are somewhat more accustomed to our emergency services leading us through an emergency situation, but this is different.”

Bannon added a plea to support local businesses, “including restaurants, by making purchases from them now when possible and, in addition, please purchase online from those with a website or purchase gift cards to use at a later date from those who don’t.”

As per an executive order issued Monday by Gov. Charlie Baker, nonessential businesses must “close their physical workplaces and facilities to workers, customers and the public from noon on Tuesday, March 24, until noon on Tuesday, April 7.” Restaurants may continue to offer take-out and delivery options for hungry customers.

The board unanimously passed a local declaration of emergency. As Pruhenski explained it, the declaration has no real implications on the street level. Rather, he said, it “will simply assist us in securing resources if we need them, emergency funding and also allow us to receive reimbursements at a later date.” Click here to read the declaration.

The board also voted unanimously to authorize town moderator Michael Wise to postpone the annual town meeting scheduled for Monday, May 4. The board did not address the subject of whether to delay the town elections slated for the following week on Tuesday, May 12. Pruhenski noted that his office has fielded many questions on those subjects from curious or anxious residents.

“As of now we are waiting for the governor and the legislature to approve some relief measures for both elections and the town meeting and we just ask for your patience until that time,” Pruhenski said.

In an interview Tuesday morning, state Rep. William “Smitty” Pignatelli, D-Lenox, said the bill allowing for elections to be postponed until Tuesday, June 30, was passed in both the House and Senate Monday and was signed by the governor Tuesday.

The bill allowing town meetings to be postponed until that date was approved Monday by the House and is expected to be taken up Wednesday by the Senate. Annual town meetings are where towns with the town-meeting form of government pass their municipal and school budgets.

“It’s pretty straightforward,” Pignatelli said of the legislation. “It is not rocket science.”

Pignatelli explained that if annual town meetings must be delayed because of the public health crisis beyond Tuesday, June 30, when the current fiscal year ends, the executive body of the town (in Great Barrington’s case, the selectboard) would have the authority to pass so-called “one-twelfth” budgets, or monthly spending packages, until the crisis was resolved. State government is working to get that information out to the state’s 351 municipalities.

There was some urgency to the extension for election days, Pignatelli said, because some municipalities, such as Natick, for example, hold their annual elections at the end of March.

“In terms of elections, there is in place some legislation providing flexibility,” Wise said. “It’s aiming mostly for the elections that are scheduled for next week, but it probably affects ours, too.”

Selectboard member Kate Burke read a lengthy statement urging residents and businesses to support one another. Like Bannon, she suggested patronizing restaurants that are still offering take-out and delivery.

“Tip as if you ate at the restaurant,” Burke said. “You can also buy gift cards to use in the future.”

Burke, who manages the Great Barrington Farmers’ Market, added: “There are great farms and farm stores all over our town and area. They have lots of food and low prices. Visit farm stores (deemed essential and still open) or order, as most are delivering now.”

Burke also exhorted residents to donate to the relief cause by, for example, sewing masks for health care workers or donating “shelf-stable food, dry goods and personal hygiene items to local organizations. Click here to read her full statement.

Finally, Burke shared a regional list of food pantries and their hours and a list of school-related food assistance programs in Berkshire County.

Bannon said the town has established an email address, COVID-19@townofgb.org, for non-emergency questions and concerns. Abrahams has volunteered to respond to the emails and provide essential non-emergency information on a variety of issues, or direct residents to the appropriate individuals and organizations that can help. For all emergencies, residents should continue to call 911. The email account will remain active and monitored until further notice.

“We are adapting as fast as we can and are doing our best to push up-to-date information out,” Pruhenski said. “While we don’t have all the answers yet, we are working on them and we’ll have answers for you soon. I realize that can be frustrating, but we are doing the best we can.”