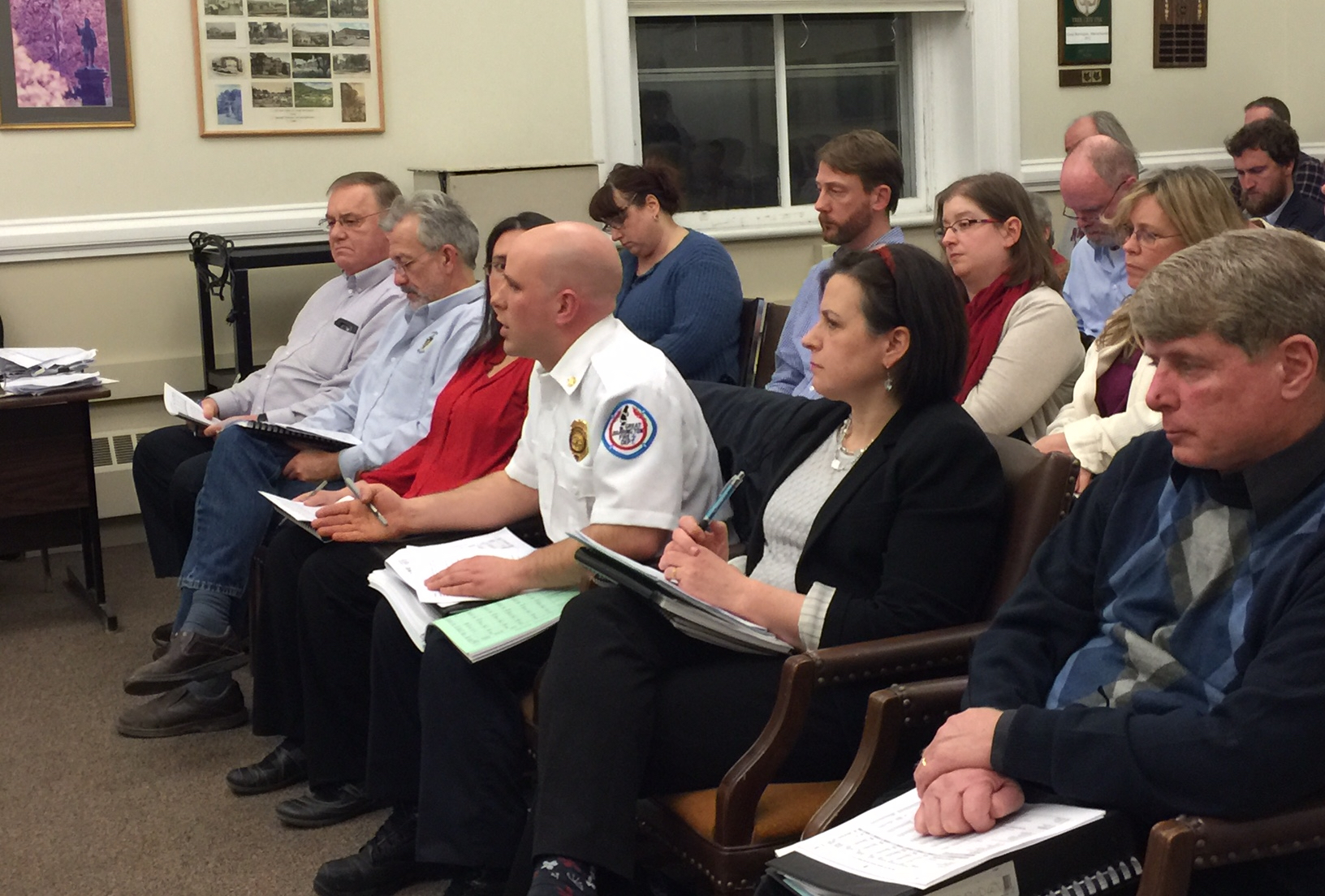 Great Barrington — Fire Chief Charlie Burger was in the hot seat last night (March 23) as members of the Finance Committee grilled him over a request for $110,000 to hire new staff to help with inspections and maintenance, raising this role from one part-time person to two full time for the next fiscal year, 2016-2017.

The committee had, at another meeting, voted to recommend a drop in the request down to one full-time position instead. The Selectboard will vote Monday, March 28, 7 p.m., on the final budget to be presented to voters at Annual Town Meeting in May when the final decision will be made.

The town’s 2017 operating and capital budget was under continued scrutiny by the Selectboard and Finance Committee at Town Hall, where the room was packed with members of various departments, and about 14 residents, most of whom were volunteer firefighters.

Chairman Michael Wise said the $10.8 million operating and $5.6 million capital budgets were “fiscally responsible…flat, disciplined” and had “well though out options” that were “forward thinking but sensible.”

Member Leigh Davis agreed, saying there are “a lot of departments working together to control spending.”

Member Thomas Blauvelt said he agreed with Davis, but added there was “opportunity to ratchet it down a bit more tonight.”

Burger calmly answered questions in response to a bit of handwringing over that $110,000 for the two new hires who would cover both the station during the day and daytime calls for which the volunteers cannot always be relied upon due to jobs. Besides Burger, the department has one part-time paid employee.

“There’s a lot of work not getting done,” he said. He needs the extra help “to get my hours to reasonable level, and handle a lot of things I don’t get around to which are important to the department from administrative standpoint.” He said inspections both for equipment maintenance, and for fire and building codes “will slowly increase over time,” and that the “department does a lot of service [on equipment]” both routine and basic inspections that if done well increases the life of the equipment. Major mechanical repairs, he said, go out to bid.

“From a long-term perspective it’s responsible,” Burger said of his request.

Former fire chief Harry Jennings worked his way to the podium, agitated that such a request would be withheld given the demands of Burger’s job in a department full of volunteers and only one other part time employee.

“This young man here works 90 hours a week,” Jennings said. “We’re burning him out. I asked for it for years. It’s very much needed.”

Committee member Will Curletti said if there was any place not to cut it was here. “These guys do a great job,” he said. “We should help them out.”

And committee member Walter “Buddy” Atwood III picked through fire department activity with a fine toothcomb, a bit skeptical about the need for more help with inspections.

“It’s a big jump to make,” Blauvelt told Burger. “But I don’t understand the world you live in.”

Town resident Gabrielle Senza said she “would rather have the right amount of compensation for the fire department, and take it away from less important things. I can’t think of any more critical need.”

Davis said her “hesitation” was the “big jump to two full-time positions.”

Volunteer firefighter Rob Gaughrain got up. “What’s the difference if you have a guy who is overworked,” he said. “[Burger] is a really honest guy and he doesn’t ask for more than he needs.”

Wise said while there were savings to be had in that part-time workers do not have benefits, there are “costs in reliability.”

Burger said this was indeed the case. He also noted the department’s capital requests for $200,000 in air packs and a $600,000 fire engine will be offset by grants, as are a number of other town projects and equipment.

There were a few thoughts tossed around about where cuts might happen in future. Town Manager Jennifer Tabakin raised the idea of possibly increasing fire safety inspection fees. This set off Atwood, who wondered why it’s always “the taxpayers” who get the “hammer.”

“All we’re doing is holding people up for more money at a time we’re trying to grow the town bigger,” he added.

Some vocal residents think another taxpayer stickup is the annual Berkshire Hills Regional School budget, which like all budgets, stretches ever upward year after year, mostly due to benefits. This year Great Barrington will pay $14.5 million, or 52 percent of the $25.2 million it takes to run the schools. That number is up $939,000 from last year. The other towns in the district, Stockbridge and West Stockbridge, pay less, and every budget season the wound is reopened.

“Great Barrington taxes would be down $3.5 million this year,” said former Finance Committee Chair Sharon Gregory, “if we redistributed [school spending] using assessed values. We keep ending up in the same place.” She asked if there was a way to “meaningfully object” to the school budget process and assessment levels, and wondered if progress had been made by the Regional Agreement Amendment Committee (RAAC), representatives from each town who are working to find a solution to the current funding formula, which was set into the Regional Agreement years ago.

“The process is a bit stalled,” Wise told her, since he is on RAAC, too. “I’ve been trying to find a way to unlock it…using a procedural avenue.” He said these “fairness issues” required “imagination.” The “basic problem,” he added, was “we have this three-town district that lets two towns with less population decide the budget,” since the school budget is approved if two out of three towns vote it in.

“There was a sign of movement from Stockbridge the other night,” Wise added. “But it’s gonna take a while.”

Selectboard Vice Chair Steve Bannon, who also happens to Chair of the School Committee, was irritated that a school issue was raised so significantly without the rest of the committee or the superintendent present. “I’m surprised this came up tonight,” he said. “It was not on the agenda.”

All the ruffled feathers settled down when the firemen got a noisy radio call, and a good portion of the room emptied out on account of it, along with Chief Burger. There was an accident to attend to, and soon the spring night was filled with the sound of sirens.