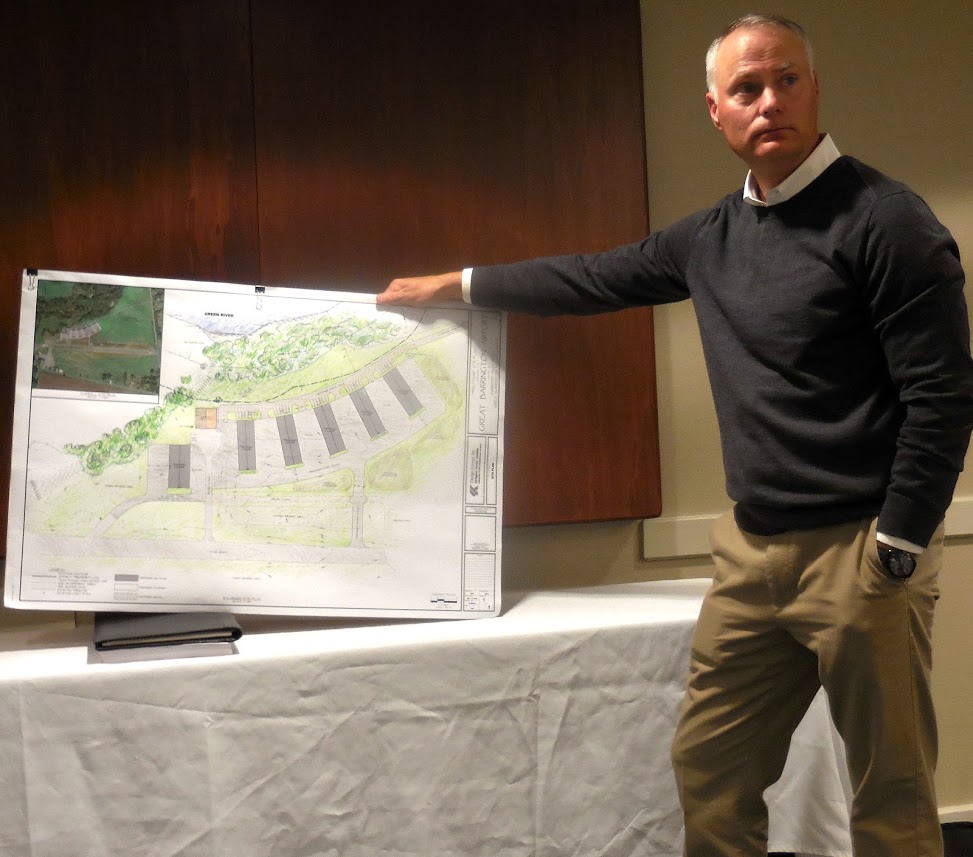 Great Barrington — The thorny question of what kind of expansion to allow at Great Barrington’s only airport has reared its head, as the selectboard again considers an application for a special permit that would allow the airport to construct new hangars, even as neighbors object vehemently to any attempt to grow the sometimes noisy facility.

At its July 23 meeting, the planning board voted 4-0 to give a positive recommendation to the selectboard on the special permit that would allow the airport to construct six new hangars on land that is zoned residential.

The selectboard, which is the special-permit-granting authority, held a public hearing via Zoom on Monday night. If approved, the proposal would essentially build six new hangars on a grassy area on the north side of the only existing paved runway.

“We’re trying to be transparent and share our hopes for the future as it relates to this project,” Scalise said.

Bannon motioned — and the board accepted — to continue the hearing until its next meeting Monday, Aug. 24, when public comments, which are expected to be lengthy, will be taken. Board member Kate Burke recused herself from any involvement because, while she is not an abutter, she does live near the airport and is “right under the flight path for landing planes.”

Indeed, several nearby property owners wrote letters of concern that were included in Monday’s agenda packet. Some were written by lawyers, including one Boston attorney representing Holly Hamer, Marc Fasteau and Anne Fredericks, who live on Seekonk Cross Road.

Also writing were Michael Peretti, who is also the town tree warden, along with Seekonk Cross Road residents Andrew Kriegman and Joanne Osgood Sheron. There is also a lengthy polemic from longtime airport antagonist and next-door neighbor Claudia Shapiro. Click here to read those letters.

Currently, the airport has 23 existing aircraft stored in the lone hangar and 25 stored on grass adjacent to the runway (called “tie downs“). The project will provide as much as 33 in-shelter additional aircraft spaces. Six each will be stored in the five larger hangars and three in the smaller hangar. The proposal also includes a new access driveway from Seekonk Cross Road.

In an apparent response to neighbors who are wary of any increase in the airport’s traffic, Scalise was quick to point out that the proposed hangars are not a vehicle for growth of the airport because almost all of those using the new hangars would be current aircraft owners seeking to abandon their tie-down arrangement in favor of the shelter of a hangar. In addition, Scalise said the proposal is not designed for substantial yearly growth.

“If you want to expand the airport, you lengthen the runway,” Scalise explained. “None of that is proposed here. We’re proposing to keep this airport the same, but allow exterior-parked aircraft to park indoors.”

Scalise originally floated the latest proposal at a neighborhood meeting last October at the Fairfield Inn, not long after he was retained by the airport’s owners, where he was confronted by hostile neighbors who peppered him with questions.

At the inn, Scalise told the 25 or so people in attendance that the airport’s owners were planning to essentially resubmit their original plans that were abandoned in 2017.

Two years before the meeting at the inn, frustrated airport co-owner Jim Jacobs, after months of planning and strife, had stunned the selectboard and the audience in Town Hall, wearily admitting that he had had enough and was throwing in the towel: “I don’t want a special permit.”

The application was withdrawn “without prejudice,” which means without any loss or waiver of rights or privileges. In response to a public outcry at that time, airport officials had scaled back their original proposal and sought to build only three new hangars at the facility west of town on Route 71. Now the airport has returned to its original proposal of six new hangars, while removing the existing clamshell hangar.

The airport was built shortly before the town established its first zoning code in 1931. It is, therefore, a pre-existing nonconforming use and the site lies in the town’s Water Quality Protection Overlay District next to the Green River. Any expansion requires a special permit.

Great Barrington’s zoning bylaws also require that an aviation field in an R-4 residential zone obtain a special permit, which the airport was never compelled to apply for because of its grandfathered status.

Selectboard members had a few questions and asked representatives from Berkshire Aviation Enterprises Inc., which owns the Walter J. Koladza Airport, as it is formally known, to return Monday, Aug. 24, with answers. Oral comments from members of the community will also be heard at that time.