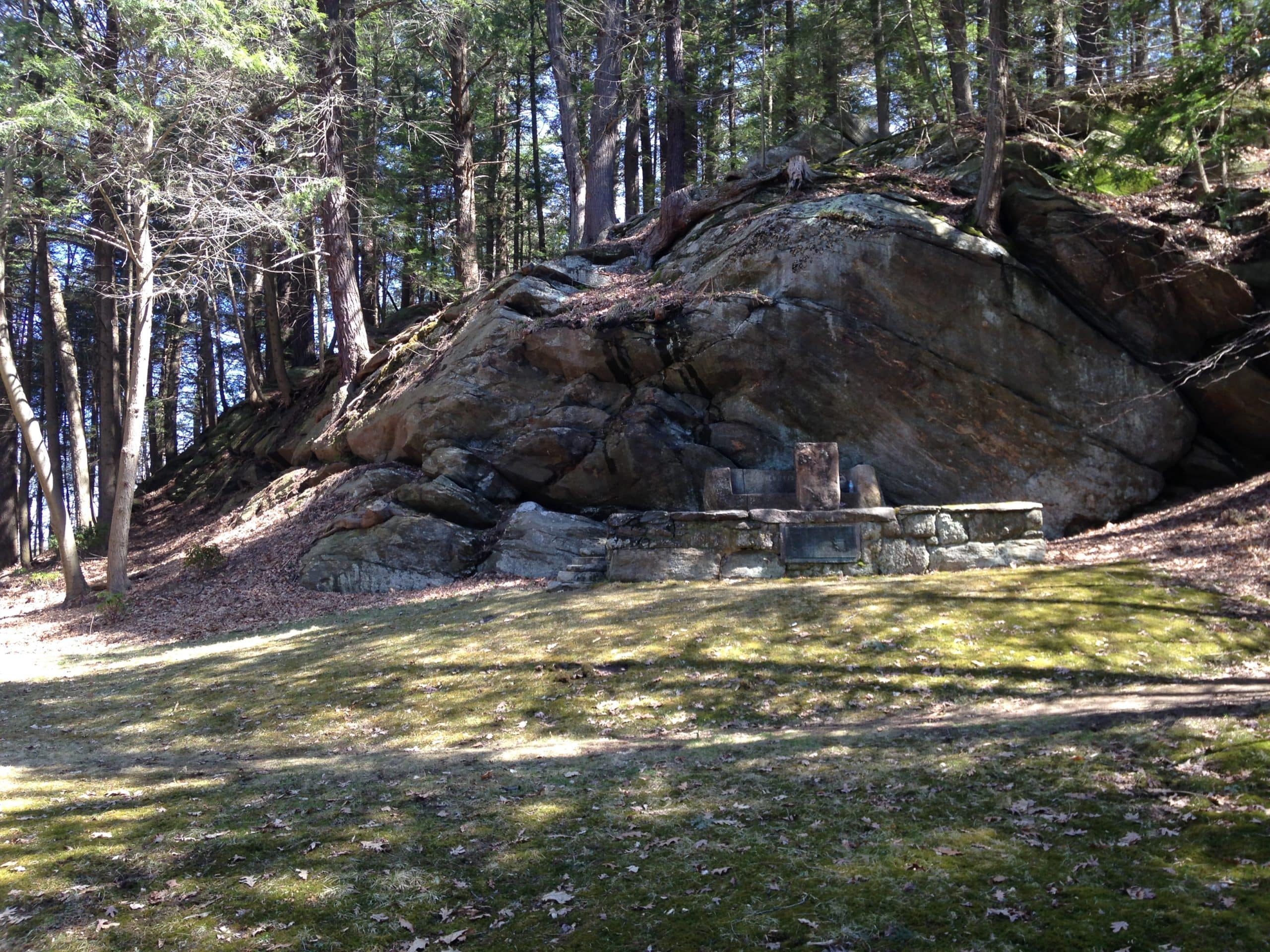 The Sedwick Memorial at the glen on Laurel Hill. Photo: Rick Wilcox

Stockbridge — On July 1, 1878, the Laurel Hill Association purchased a Civil War cannon to be placed in front of the Civil War monument at the corner of Main and Pine streets. Encompassed by an attractive black wrought-iron fence, it was, some years later, deemed wise to remove the wheels and secure the barrel on two upright stones. In 1853, at the west end of Main Street, a different kind of civil war was taking place in the town cemetery, one to battle neglect and indifference regarding the care of the village’s common areas.

“A woman dressed in a long black riding habit mounted on a white horse was picking her way through Stockbridge Burying Ground. Mary Hopkins, in her late thirties, was very handsome, in a healthy, high spirited, dynamic way. She road her horse with ease and confidence. But there were no paths in the Cemetery, the place was full of weeds and burdocks and tangled vines, so the going was difficult. The grave of Mary’s grandmother was here, Electa Sergeant, who had been the first white child born in Stockbridge, in the Indian Mission. A little farther on she came to the handsome table-tomb of her great-grandfather, the patient and god-loving John Sergeant, who had come in 1734 to what had been a howling wilderness to begin his hopeful struggle with the mind and soul of the red man. She read the long and touching inscription on his stone. It was overgrown with briers and brambles, and a strong feeling of resentment rose inside her over this neglect.”

So stated the opening lines of Margaret French Cresson’s 1953 100th anniversary history of the Laurel Hill Association, with the heroine on a white horse, giving the often-told and possibly apocryphal tale of the catalyst that created the oldest continuously operating village improvement society in America in 1853.

“And so on the very evening, August 22nd 1853, Mary tacked up some notices, one in the Post Office, one on the great elm outside, and in other public places, inviting all the citizens of Stockbridge to assemble on Laurel Hill on Wednesday the 24th, ‘to take measure for the regular improvement of the Burying Ground, the streets, the walks, the public grounds and Laurel Hill.’”

Recently, the Laurel Hill Association embarked on a historic restoration of the association’s namesake, Laurel Hill, which included a history of the hill from 1737 to present to be co-authored by Karen Marshall of Stockbridge and me. The outcome of that endeavor may be fodder for another time, but the by-product of the research, going down the rabbit hole, that is, following the many tangents, provides some interesting minutiae about life in 19th– and 20th-century Stockbridge.

In the summer of 1868, the minutes of the Laurel Hill Association reflected the progress being made to create Mary Hopkins’ village beautiful: “It is gratifying to report that several gentlemen of our village have, during the past year, set hedges, chiefly of our native hemlock, on or about their own premises, and if time shall justify the promise of the present, there is every reason to believe that our town will, in a few years, have added to its pleasing features the, till recently, novel one produced by this charming mode of enclosure which adds such beauty to the English landscape and so delightfully entrances of attractions of the environs of Boston.”

“Nor does our village forego its hold upon the affection of self-exiled Stockbridgians in the far-off lands of their pilgrimage. As proof of this it may be mentioned that a returned wanderer from the shores of the Pacific, now among us, remembering many happy hours of his boyhood spent beneath the spreading branches of the giant willow on South Street, felt himself its debtor to a degree that has prompted him to provide iron supports for its enormous branches, a stairway into its top and seats to the accommodation of more than 40 visitors among its limbs. The outlay, though not yet closed, has already exceeded $50. Long life to the ancient tree and its thoughtful benefactor.”

In July 1884, tragedy struck: “The Association, in common with our whole population, mourns the loss of the famous ‘Old Willow’ on South Street in a miniature cyclone on the 13th of July. Many dollars, have, from time to time, been appropriated to aid its massive branches in sustaining their freight of years, infirmities and previous memories of generation; but they have at length succumbed to the inevitable and are now passing into fuel and art wro’t relics of its historic past.”

Lest one think that the Laurel Hill Association minutes were a continuous flow of flowery prose, sometimes indignation and action were called for, although in the following examples of juvenile delinquents and wandering cattle, the first, one would hope, was most assuredly tongue-in-cheek:

“June 15, 1857 The Executive Committee passed three votes … Thirdly That ye President be appointed to see that due justice be done on ye juvenile malefactor, who stripped ye beautiful elm near ye station house. (Mem. Ear-cropping would be too good for such villainous misdemeanor.)”

“June 5, 1871 The nuisance of cattle driving in the streets was called up, ventilated, condemned and execrated; and Messrs. Byington and Norton appointed to look after negligent owners of beasts in question and if needful for reformation, make examples of them according to statute.”

“July 6, 1903 Attention was called to the habit the loafers have developed of spitting on the sidewalk in front of the post office, and the Committee were directed to ask Dr. Stockwell as one of the Board of Health, to attempt to stop the nuisance.”

As I circled the rabbit hole, I wondered if I should retitle the article “High Crimes and Misdemeanors.” Certainly the Laurel Hill Association has a long and storied history, but perhaps more important, it is alive and well today, and offers exercise with the appropriate social distancing required in our world today, ranging from the level ground of the Mary Flynn Trail to the more vigorous hike through the Sedgwick Reservation to Laura’s Tower or the boulder-strewn geological purgatory of Ice Glen. Those trails and access to other Laurel Hill properties are free and open to the public. Limited parking on the Park Street cul-de-sac and entrance to the Mary Flynn Trail, Laura’s Tower and Ice Glen can be overcome by parking on Main Street and taking the Laurel Hill Trail from the west side of the town offices at 50 Main St., where the hiker can see restoration already in progress. Maps of Laurel Hill properties and information about membership are available at www.laurelhillassociation.org.