Chances are you will be hearing and reading a lot this week about Fossil Fuel Divestment. So what exactly is that? It’s a global effort to convince people and institutions to stop giving their money to fossil fuel companies, because those very companies are hindering us from preventing catastrophic climate change.

It’s actually very simple: Climate change is happening, and it is caused by greenhouse gas emissions, which are too high and continue to rise every year (check this out if you’d like to learn more: www.epa.gov/climatechange/ghgemissions/global). For carbon emissions to go down we must make polluters pay. That’s what a “carbon tax” is. 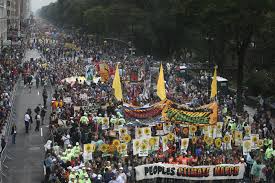 Right now it is free to dump greenhouse gases into the atmosphere. Fossil fuel companies don’t have to pay for the “externalities” of their products. Consequently, companies like Exxon/Mobil, Shell, and British Petroleum, and many others are collecting historic profits from their investments (the low gas price notwithstanding), because the environment and our health are paying the price instead. These companies also collect hundreds of billions of dollars annually in government subsidies worldwide.

At the same time these very same companies funnel millions of dollars into misinformation about climate change, and lobby against such urgently needed projects as a carbon tax, renewable energy, or public transport (think Bill Koch and Cape Wind!). Which makes sense for them, of course, because these green initiatives would hurt their bottom line. Their products would become more expensive and less competitive.

What doesn’t make sense, however, is that we the people individually and collectively invest the savings for our future in these companies. As long as we continue to give them a share of our retirement funds and other assets we support their project of destroying a livable planet. It doesn’t make sense.

This is why people around the world are calling this week for a “Global Divestment Day” in order to convince governments, churches, municipalities, universities, and everyone else to divest from fossil fuels. We say we are invested in something when we really care about it. Shouldn’t we be invested, therefore, in a livable future? Don’t we care about life on this planet for our children and grandchildren and their offspring as well as all other creatures that make earth such a wonderfully beautiful miracle?

There is another argument for divestment: Climate scientists agree that four-fifths of the existing fossil fuel reserves must stay in the ground in order to prevent catastrophic global warming. Assets that cannot actually be turned into profits become so-called “stranded assets,” which means their value will plummet. It is only a question of time. This phenomenon is also referred to as the “carbon bubble.” Fossil fuel investments will not be the safe bet that people have come to rely on for their portfolios for much longer (think housing bubble, only much bigger!).

Divestment itself does not stop climate change. But it is an important first step. And it is not just grassroots activists who are calling for it. World Bank Chief Jim Yong Kim, former president of Dartmouth College and professor at Harvard Medical School, now the head of one of the world’s most powerful financial institutions, supports divestment. The Rockefeller Brothers Fund divested from fossil fuels last fall. Many churches and universities have begun to divest as well. 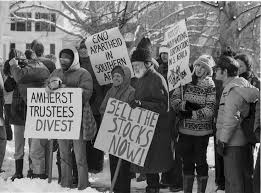 Divestment is not a new idea. It was a very successful tool in the fight against Apartheid South Africa. Four months after he was released from prison, Nelson Mandela came to Boston and thanked Massachusetts for being the first state to have withdrawn its pension fund investments from companies that were doing business with South Africa. That success is an inspiration for the fossil fuel divestment movement, which has grown much faster than any other divestment movement in the past.

Instead of banking on the destruction of the planet we need our investment portfolio to mirror our green, renewable legislation, programs that are funded by taxpayer dollars — such as the Green Communities Act, the Global Warming Solutions Act, and our involvement in the Regional Greenhouse Gas Initiative (REGGI). By pulling our investments out of dirty fossil fuel companies we align ourselves with the clean, green tech future that is making Massachusetts the innovative leader in sustainability this country so urgently needs.

Join 350 Massachusetts for a better future this Thursday, February 12 ,from noon to 5 p.m. at the State House in Boston, and join the 350Mass Metrowest group for a Divestment Vigil on Saturday, February 14 at noon at the intersection of Route 20 and 27 in Wayland! And come to the Boston Common on Saturday, February 28 at 1 p.m. for the statewide “Rally to Save Cape Wind: Turbines, Not Pipelines,” which will be a chance for all of us to reject the Koch brothers’ perversion of our democracy and highlight the direction we want our legislators to take instead. Visit 350MA.org for more information.

Sabine von Mering can be reached at sabine.vonmering@gmail.com