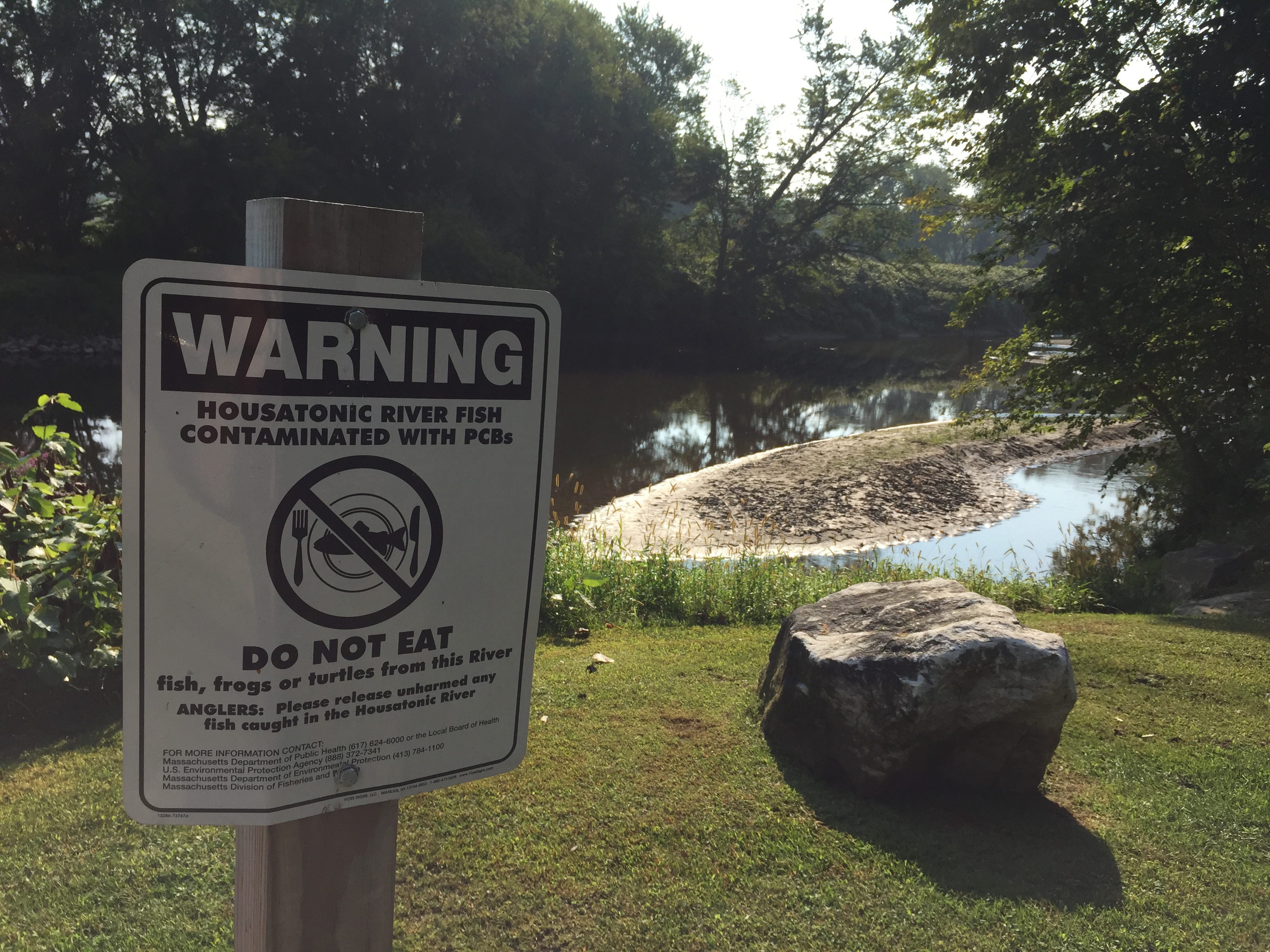 Lenox — It was a window into a brief moment in the torturous, more than 20-year battle to make a polluting corporate giant wipe up after itself and haul its poisons out of the Berkshires.

In the Lenox Library Wednesday night (February 14), the EPA (Environmental Protection Agency) Housatonic River Citizens Coordinating Council (CCC) met to discuss the ongoing developments in the seemingly endless legal maze to get General Electric Company to agree to all elements of a plan to clean the Housatonic River of polychlorinated biphenyls (PCBs), deposited there from its Pittsfield plant between the 1930s to the late 1970s when the chemical was banned by the U.S. as being a probable carcinogen.

PCBs were dumped, discharged, and continue to seep in lesser amounts into the river, flowing downstream and contaminating river sediment and surrounding areas. The river flows through Connecticut and eventually discharges into Long Island Sound.

While GE admits to its culpability in the mess, and has cleaned much of the area closest to the Pittsfield plant, it continues to argue with the EPA about how it should clean up the down stream sections of river –– the “Rest of River,” as the EPA refers to it. The company is putting up a fight over having to ship the toxic waste out of state by rail, among other things, saying it will cost $250 million more. Instead, GE wants to create landfills for the waste in Lenox, Lee and Housatonic.

A 2000 federal and state consent degree originally ordered GE to clean up the chemicals. The latest EPA arrangement has the company spending $613 million for 13 years of work on the Rest of River area from the east and west confluence in Pittsfield downstream into Connecticut. According to Edge environmental correspondent Mary Douglas, “Massachusetts Department of Environmental Protection (MassDEP) estimates that about 75 per cent of the PCBs will remain in the river soil and sediments, with only about 25 percent actually dredged and removed.”

As a known toxin and “probable carcinogen” in humans, and a known carcinogen in animals, PCBs continue to quietly wreak havoc in biological systems not only along the Housatonic, but almost everywhere in the world, according to Housatonic River Initiative Executive Director Tim Gray. At least one study says the chemical volatizes into the air, he noted. According to the EPA “PCBs are associated with numerous non-cancer health effects, including neurological, immune, endocrine and reproductive issues.”

The latest struggle is over the EPA’s 13-year plan, and now involves dispute resolution and mediation over GE’s argument that it should not have to ship out the waste, since a precedent exists to dispose of such soils locally both in Pittsfield, and in other similar situations around the country. GE is using “Hill 78,” a PCB dump adjacent to Allendale Elementary School in Pittsfield, as a perfect example. Many environmentalists say GE is already getting off easy by not having to do a 100 percent clean up, and keeping the waste in the Berkshires is sparking outrage.

Those three dumps are near Woods Pond in Lenox, a spot on Forest Street in Lee near Goose Pond and adjacent to a stream that runs back down to the Housatonic River, and along the Rising Pond in Housatonic, where GE already has purchased land in readiness.

Anderson pointed out that “GE is not acknowledging” other instances in Pittsfield where the contaminated soil was shipped out of state. For that matter, GE is not mentioning the cleanup of the PCB contamination from the Hudson River near Ft. Edward, N.Y., where the company helped install rail lines to ship contaminated sludge to remediation centers.

Anderson said she spoke to GE/EPA mediator John Bickerman of Bickerman Dispute Resolution in Washington and said he is aware of three areas of dispute: should there be more toxic dumps in Berkshire County, should Woods Pond be cleaned more extensively, and “whether GE should be on hook for perpetuity or for a long, long time.”

“The mediator said we have an uphill battle to stop more toxic waste dumps in Berkshire County,” she said, adding that Bickerman also told her the CCC “might want to discuss this issue of compensation for cities and towns for temporary or permanent toxic waste dumps.”

Gray said that is an issue for town selectboards.

There was sighing and handwringing when a Power Point dispute resolution flowchart was flicked on by EPA Remedial Project Manager Dave Dickerson. This alone could take a few years, noted Dean Tagliaferro, the EPA’s Pittsfield-based project manager.

“What will make it go on forever is GE staking out every argument they can make,” Gray said. “If anyone is going to delay this it’s going to be the General Electric Company.”

“Litigation is war, and when you go to war you put everything on the table,” said Pittsfield-based attorney and CCC member C. Jeffrey Cook. Cook is also a board member of 1Berkshire, which in 2011 received $300,000 from GE and proceeded to develop a public relations and social media campaign to support a minimal cleanup. The move prompted two resignations of other 1Berkshire members.

GE has woven its tentacles throughout the Berkshires, and it now appears to have stretched them into Boston. GE may not only stall the process, since paying an endless stream of lawyers is likely cheaper than cleaning up, but there are fears the company may have help after Gov. Charlie Baker and Mayor Martin Walsh used tax breaks to woo GE into moving its headquarters from Fairfield, Connecticut to Boston. GE announced the move last month, and Mayor Walsh likened it to winning at Powerball.

With this in mind, Anderson turned to MassDEP’s Eva Tor and John Ziegler, both from the regional office in Springfield. “What is the state’s position on these dumps GE wants to establish [here]?”

“The record is clear,” Tor said. “We’ve made our position. We support the EPA remedy.”

“You’re still against the dumps?”

Tor said these were questions for the Governor’s office. A spokesperson for Gov. Charlie Baker had told Mary Douglas his administration supports and is committed to the river cleanup for both economic and environmental reasons.

Herkimer mentioned the name Steve Ramsey. A quick look on the web shows that within a 5-year period, Ramsey went from being Chief of the Environmental Enforcement Section at the U.S. Justice Department, to his job at GE. At Justice, Ramsey helped write the laws governing superfund sites, alarming environmentalists over his expertise at finding corporate loopholes. Herkimer later told The Edge that Ramsey is linked to Connecticut DEP Commissioner Daniel Esty. The two worked at the Yale School of Forestry, then went into private consulting business together, she said. “This created a glaring conflict of interest, so Commissioner Esty recused himself from everything related to the Housatonic River superfund site.”

Out came the slides of the Berkshire sites GE is eyeing for one million cubic yards of toxic waste. In Lenox, it’s south of Woods Pond at a gravel pit near Lane Construction. In Lee, the site is known as Forest Street, and south of the Mass Pike and southeast of the Lee Outlets.

Gray, a Lee native, said the proposed dump there “is unconscionable because nearby is Goose Pond, considered one of the cleanest ponds left in the state.”

In Housatonic, the proposed landfill is on the banks of Rising Pond, northwest of the dam.

Tagliaferro explained how these dumps are built. They build a “cell where the actual waste goes.” The cell involves two “impermeable” bottom liners with some waste material and detection systems in between the two. It is all “eventually capped like a landfill.”

Here is where questions, and some rumors, abound. Tagliaferro said it is a question whether “GE has the right to acquire the necessary portions of these sites.”

“EPA is requiring out of state disposal in an approved PCB facility because the agency believes that much of the soils and sediments contains levels of PCBs higher than 50 ppm and Massachusetts does not have PCB-approved landfills for those concentrations,” Douglas told The Edge.

There were a few gasps when Gray said there were rumors that GE was eyeing Eastover, the resort off East Street in Lenox, for a dump. “The county needs to think about that.”

It was time for indignation among the roughly 50 audience members. “As a citizen I am really offended by any talk of trade offs whether it’s dumps or monetary,” said Housatonic resident Michelle Loubert.

Housatonic resident Nick Stanton wondered about the long-term wisdom of the landfill remedy, since liners are not foolproof and come with “warranties,” and said “biological degradation” — known as “bioremediation” — is a preferred solution. “Microbes can actually eat these things and they render them harmless.”

A pilot bioremediation project on an 8-acre dioxin and Pentachlorophenol (PCP)-contaminated site in Great Barrington has raised local hopes that the groundbreaking technology might help clean the river. The project, on the former New England Log Homes property, was stopped by MassDEP over several issues, one of which was uncertainty whether it was working. But recent sample testing by the company, Biopath Solutions, showed significant reductions in the chemicals, which according to the creator of the technology, are more difficult to neutralize than PCBs.

According to the Federal Register, EPA scientists have previously said liners are no guarantee and that landfill pollutants can “migrate into the broader environment.”

“A liner is a barrier technology that prevents or greatly restricts migration of liquids into the ground. No liner, however, can keep all liquids from going into the ground. Eventually liners will either degrade, tear, or crack and will allow liquids to migrate out of the unit.”

“The liner issue came up at Hill 78 next to elementary school,” Gray said. As it turned out, “the liner was one that wasn’t good for hazardous waste. Ten years later, the school had to be excavated. One of the wins of the consent decree was to clean up the Allendale School.” Gray noted that the school playground still has air monitors.

“This is why we’re worried about other dumps in Berkshire County,” Gray added. “Liners will all eventually leak. Maybe we can use these [bioremediation] technologies so we don’t have to have the landfills.”

“If somebody develops something that works, and it works on a large scale, we will be willing to look at that,” Tagliaferro said of bioremediation.

Benno Friedman, a CCC and HRI member, asked EPA officials if they knew of instances of failed liners in the state. None said they did, though there was mention of a known liner failure in North Carolina.

“PCBs have been found on three miles on each side of landfills,” Gray said.

He further said this work was more than just about cleaning up the Housatonic River, where “mink puppies are dying,” noting that PCBs have evaporated and landed in the polar region. “Critters are getting sick all of the world…you will get a dosage of PCBs when you buy anything at the supermarket. Moms pass it to babies.”

He said these are the larger concerns driving the EPA.

“We’re fighting for our little worldwide part of the problem.”

To learn more about the cleanup, go to the EPA’s dedicated page on their website.