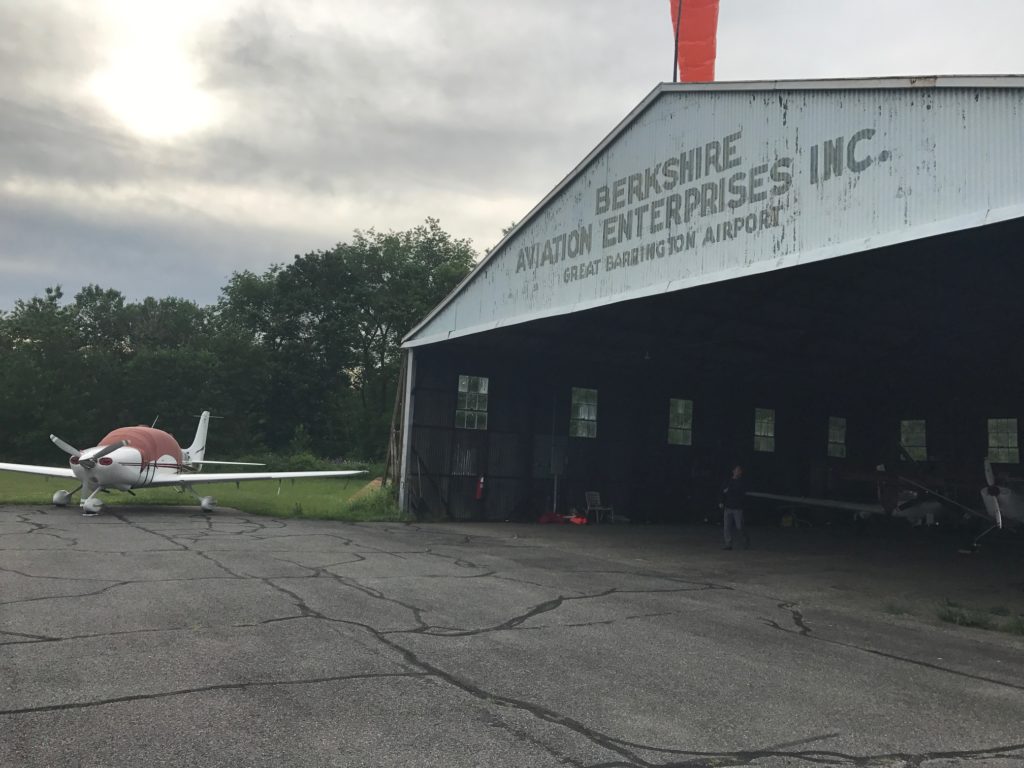 Great Barrington — One controversial special permit has been put on hold and another was approved unanimously by the selectboard Monday night.

The application by the owners of the Great Barrington Airport for a special permit would allow the airport to construct six new hangars, a proposal that most neighbors have objected to.

This is the second time the hearing has been continued. On Aug. 11, the board voted to continue the hearing to this week. Michael Peretti, Claudia Shapiro, Andrew Kriegman, Holly Hamer and Joanne Sheron wrote statements of disapproval. Click here to read them. A Boston-based attorney, Thaddeus Heuer, who represents Hamer, Marc Fasteau and Anne Fredericks, also spoke against the project.

See video below of the Aug. 24 Great Barrington selectboard meeting. Fast forward to 57:15 to see the discussion on the airport:

The airport was built shortly before the town established its first zoning code in 1931. It is, therefore, a pre-existing nonconforming use and the site lies in the town’s Water Quality Protection Overlay District next to the Green River. Any expansion requires a special permit.

Board Chair Steve Bannon said he would limit public comments to one hour and the board agreed unanimously to close the hearing and continue it to Monday, Sept. 14. Berkshire Aviation Enterprises Inc. owns the Walter J. Koladza Airport, as it is formally known.

The board voted 5-0 to approve a special permit for Guido’s Fresh Marketplace that would dramatically increase the size of the popular store on South Main Street. Click here to see the proposal as evaluated by Stantec, independent consultants from Northampton hired by the town to conduct a peer review.

The site plan review documents approved by the planning board and prepared by SK Design for Guido’s can be found here. Fast forward to 28:00 to see the presentation on the video above.

The plan will more than double the size of the South Main Street store from nearly 16,000 to more than 35,000 square feet. Parking will expand from 99 to 134 spaces and the expansion is not expected to have significant traffic impacts.

In the end, the board asked the Masieros, the family that owns Guido’s, to add one oak tree to the site plan. The special permit was then granted unanimously.

“I just don’t want to see anyone have to vote no because of a tree,” Bannon quipped.

Town manager Mark Pruhenski said he had written a letter to the state Department of Public Utility, which regulates Housatonic Water Works, asking if the department would consider authorizing rate adjustments for customers impacted this summer by roily and discolored water. As of Monday night, he had not heard back from DPU.

The small private water company, which serves fewer than 900 customers in the Housatonic section of Great Barrington, has been the object of numerous complaints from ratepayers who have grown more and more agitated, both in Town Hall confrontations with officials and on social media.

The board also voted unanimously last month to continue work on an independent appraisal of the value of Housatonic Water Works in the event that the town decides to buy it, either by making an offer or perhaps through something resembling eminent domain.

Pruhenski said finding an appraiser is taking longer than he thought, in part because it has been difficult to find one that both the town and water company owner Jim Mercer can agree on.

“Housatonic Water Works might disagree with our choice and find their own appraiser,” Pruhenski said. “I’m trying to save us all time and money and find one we can all agree on.”

The board also considered reinstating the town’s ban on single use plastic water bottles of 1 liter or less. The ban had been suspended on March 23 after the town declared a state of emergency in response to the COVID-19 pandemic.

The suspension has been renewed multiple times, most recently until Monday, Aug. 31. This week Pruhenski recommended suspending enforcement of the ban until Monday, Nov. 30, but three board members objected. Bannon, however, was adamant in extending it.

“Every week we’re talking about Housatonic Water Works and water problems in Housie, and I think we should have available to the citizens of Housatonic single-use water bottles until we have some sort of a solution to the problem up there,” Bannon said.

Selectboard member Leigh Davis countered that a solution to the water problem in Housatonic could take years because it involves the replacement of rusty water mains.

Eventually a compromise was reached that extends enforcement only until Wednesday, Sept. 30, which is long enough for retailers to sell their remaining inventory before enforcement of the ban resumes Thursday, Oct. 1.

The ban was passed overwhelmingly at the annual town meeting in May 2018 and went into effect May 1, 2019. It had the backing of several retailers, including Guido’s and the Berkshire Food Co-op.

The board also approved the warrant for the special town meeting set for Tuesday, Sept. 15, at Monument Mountain Regional High School. Eighteen of the 32 articles on the warrant are proposals to amend the town’s zoning bylaws. Click here to view the warrant.