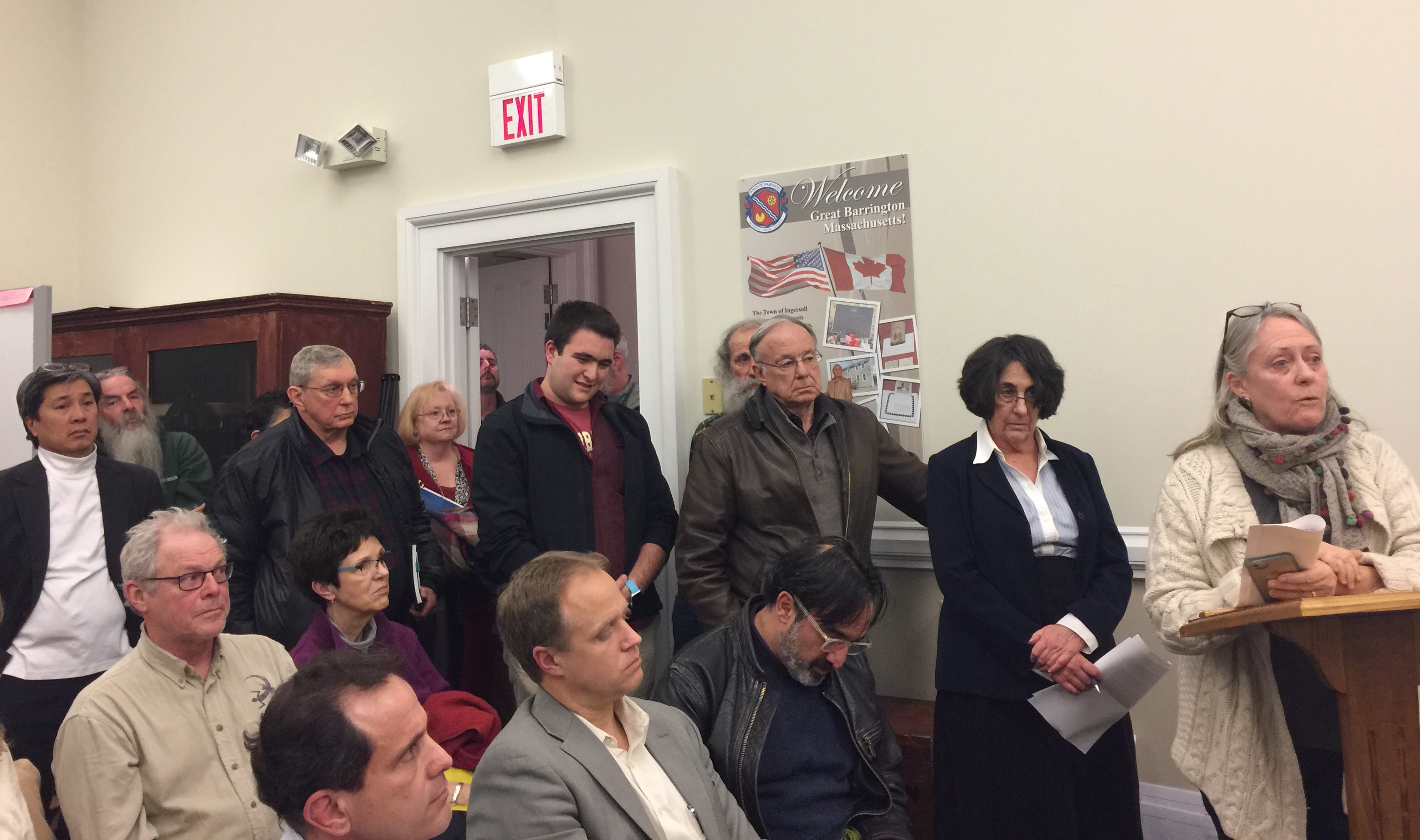 Airport neighbor Ann Fredericks speaks against the expansion of Walter J. Koladza Airport. Behind her is Marcia Stammell, in black, and other neighbors and plane owners who attended a public hearing at Town Hall Monday (Feb 13) to speak to the Selectboard about expansion plans at the airport. Photo: Heather Bellow

Great Barrington — It’s an 86-year-old small-town airport smack in the middle of an idyllic rural residential area that, to some, should stay the same and, to others, should be improved and expanded.

Berkshire Aviation Enterprises, which owns Walter J. Koladza Airport, says it wants to take a good thing and make it better, mainly for economic survival but also for passion and a love of aviation.

But the neighbors are worried about what will happen when an increasingly busier airport changes, possibly leading to even more future expansion.

The pilots and plane owners, on the other hand, all say this airport is a critical piece of the town’s economic engine and a treasure that brings people here from far and wide.

Among other considerations, they say planes are expensive and now have sensitive computerized equipment that shouldn’t be overexposed to the elements. And owners of very old planes have no choice but to store those inside.

Berkshire Aviation went before the Selectboard last night (Feb. 13) for a special permit that will allow it to further develop the property, 92 acres off Rte. 71 and Seekonk Cross Road.

It is surrounded by corn and hayfields and the area is dotted with homes.

Because the airport was built in 1931, the year before local zoning laws said the area is residential-only, it had to come to Town Hall for the official stamp of approval before moving forward with plans that include three new 147-foot by 50-foot hangars with 18 bays, a new access road and 18 new parking spaces.

These new structures will be built across the runway from where most of the existing buildings and parking are now, and this is just one of the neighbors’ many objections to the project.

“The neighbors are very supportive of the airport, but negative about the new expansion, the footprint and location, and what that means for further development,” said airport neighbor Holly Hamer.

Hamer then asked a question that added a new twist to the entire debate: If the airport doesn’t get this special permit to exist in that location, “is the airport kaput?”

Town Planner Chris Rembold said he would have to find the answer and get back to her. And since the hearing was continued to Monday, Feb. 27, everyone who packed the overflowing room last night will wonder until then whether the airport has to simply exist as it is, with no big changes, forever.

If that’s the case, the airport will continue to operate in the red, like almost 60 percent of airports in the U.S., as airport neighbor Mike Peretti pointed out.

Ken Krentza, the airport’s general manager, said, indeed, this expansion is a matter of “financial viability.”

“We have very few income sources,” he said, noting that those were tie-down and maintenance fees, and the flight school. The hangars will give it rental income. Roughly 40 airplanes are tied down right now.

Krentza also pointed out that some of the planes are worth $250,000. “We’re losing business because people don’t want to keep these planes outside.”

“The airport doesn’t exist without the airplanes,” he added.

Berkshire Aviation attorney Lori Robbins said her client had already gotten approval from the Zoning Board of Appeals to build a deck and handicap access in the main building. She also pointed out that the airport serves the area with free air ambulance services, air surveying, and military training. No one has to pay to land here.

But it is this military training that has some neighbors aggravated and worried that the noise and traffic will only increase as the airport is enhanced and enlarged.

“The helicopters are flying in all directions,” Peretti said, adding that the Blackhawks cause his windows to vibrate in the middle of the night.

Benny Barack said the “restfulness” of his home has been “shattered” by a “dramatic increase” in low-flying planes and “awful horrible helicopters.”

As it turns out, a public airfield can’t say no to the military even if it’s privately owned. Airport co-owner Richard Solan said the National Guard out of Albany, Westfield and Bradley International Airport perform day and night training. The airport, he added, was desirable for night training because “Great Barrington is dark…a big black hole.”

He said the airport does not get paid for this use. And both he and Krentza noted that the 2,500 feet of runway would ultimately keep larger planes from coming in. They said the company can’t expand the runway, either, not “one inch on either side.”

Neighbor Ann Fredericks worried that future advances to aviation technology might change this and allow larger jets to land on smaller runways. Fredericks’ main concern, however, is the sensitive environment so close to the airport, which is in a water quality protection zone.  The Green River runs next to the property. And the airport sits over the aquifer that feeds the town’s drinking water supply from a well head next to the Green River.

Then there were the pilots, who, one after another, got up to sing the airport’s praises and tell the board just how important it is to have indoor storage.

Ari Meyerowitz, along with his brother, Noah, are young pilots who inherited their father’s plane.

“Every time it rains, we have to go dry out water that’s collected inside,” Ari said. He said there was snow and ice to chip away at and worrys about rust. He further said the airport puts the town on the map and makes it more “desirable.”

Mike Litiken of Valatie, New York, said the airport doesn’t just sit there in a vacuum.

“I don’t just fly and go home,” Litiken said. “I shop around in the area, go to restaurants.”

He was also worried about what kind of massive housing development could be built on that property “if the airport goes away.”

“Forty single-family homes could be built there,” Litiken added.

Selectboard member Bill Cooke asked Solan if the hangars could be moved to protect the viewshed. Solan said they couldn’t be close to the runway but did not comment any further.

Michael Mah, a Pittsfield-based software engineer who keeps his plane in Pittsfield because Great Barrington doesn’t have indoor storage, said what the airport was planning was an important improvement.

“This place is an absolute gem,” Mah said, noting how many failing airports there are around the Northeast. “Take the meta view; this is a precious town and part of why it’s precious is the airport.”

Amenia, New York-based restaurant owner and chef Serge Madikians said indoor storage would keep him from having to pollute the air by running his engine for 15 to 20 minutes pre-flight. “I don’t want to take off with a cold engine,” he said.

And on it went with a long line-up of voices, many of which were told they would have to wait until the continued hearing date.

But as pilots worried about caring for their investments, so did the neighbors.

“This location will ruin my property value,” said Robert Parish. “My family’s been there long before Walter J. Koladza showed up on the scene.”

He said his objection was the location of the hangars where now there is a gentle sloping haylot.

And Marcia Stammell put it another way.

“What is the public cost to insuring a private financial advantage?” she said. “A house is an asset, too; so is a river and a beautiful country vista.”

Selectboard member Ed Abrahams later said he was going to talk to the airport’s neighbors to try find a mutually beneficial solution.