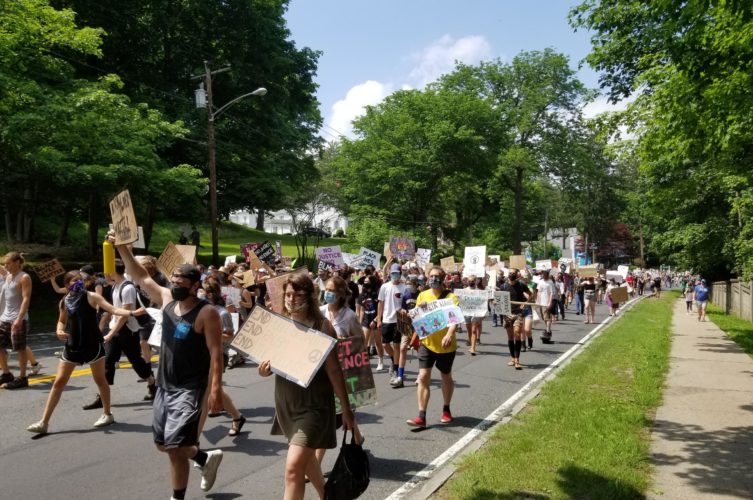 Editor’s note: This letter has been updated with new information and the headline revised at the request of the writer.

On Saturday, June 6, hundreds of peaceful protestors met on Main Street in Great Barrington for a protest against police brutality and institutionalized racism organized by Calista Nelson, a rising senior at Monument Mountain Regional High School, and Langston Stahler, a rising freshman at Bard Berlin, with the support of the Berkshire County chapter of the NAACP. The organizers had made an agreement with the Great Barrington Police Department not to disrupt traffic flow to avoid state police being brought to the scene.

About an hour into the protest, protestors began to fill the street in front of Town Hall, several lying on their backs while others surrounded them chanting “I can’t breathe,” and “Say his name,” a testament to George Floyd’s final moments before he was killed, slowly and deliberately, by four Minneapolis police officers. As promised, the police responded quickly, blocking off the road and redirecting traffic without disrupting the protest.

The protest was powerful, peaceful and strong. My mom and I had had some anxieties going into it, considering the police response to other protests in cities across the country. As we were leaving, we reflected on the response shown by the Great Barrington Police Department. They didn’t tear-gas us, they didn’t shoot at us with rubber bullets, they didn’t force us to disperse. At first glance, it seemed they did an admirable job at responding to and dealing with the protest.

But are these really the standards we now hold our police to? They didn’t incite violence and they didn’t hurt anyone, but does that automatically mean their response was something to celebrate and praise?

What you wouldn’t see at first glance at the protest is that the police were in no way there to listen. They redirected traffic without our asking because that is their job. When we marched to the police department, when we asked Chief Walsh directly what he was doing to help us, to support our movement, he closed the gates on us. Not a word was said to the protestors about what our local police department is doing to examine their own racial biases and to assess the ways in which they contribute to the oppression of the people of color living in our community. There wasn’t even a “We hear you. We’re working on it” — nothing.

After the majority of the crowd moved back down Main Street toward Town Hall, a smaller group stayed behind to demand a response from the police chief. When he finally addressed them, he did not answer questions, he did not listen to the grievances of the people he swore to serve and protect. At that point in the protest, his statement was too little, too late.

We are living in a time when protests against police brutality are being met with more police brutality, when the man in the White House effectively declared war on his own country in response to protests against centuries of racial discrimination and oppression. As much as it is necessary for us to stay aware of the overt ways in which police departments across the country are contributing to racism, we cannot allow the constant images and videos of tear gas, rubber bullets and concussion grenades to lower our standards for how we expect our police to behave.

On Saturday, the Great Barrington police did not incite violence, they did not arrest any of the protestors, they did not fire on their own people. But they also shut us out. They didn’t listen to us, and when we asked what they were doing to help, they hid behind a locked gate. It is our duty, especially if you are a white person, to put the pressure on our local police departments to deeply examine the ways in which they contribute to racial oppression. Their silence cannot go unnoticed.