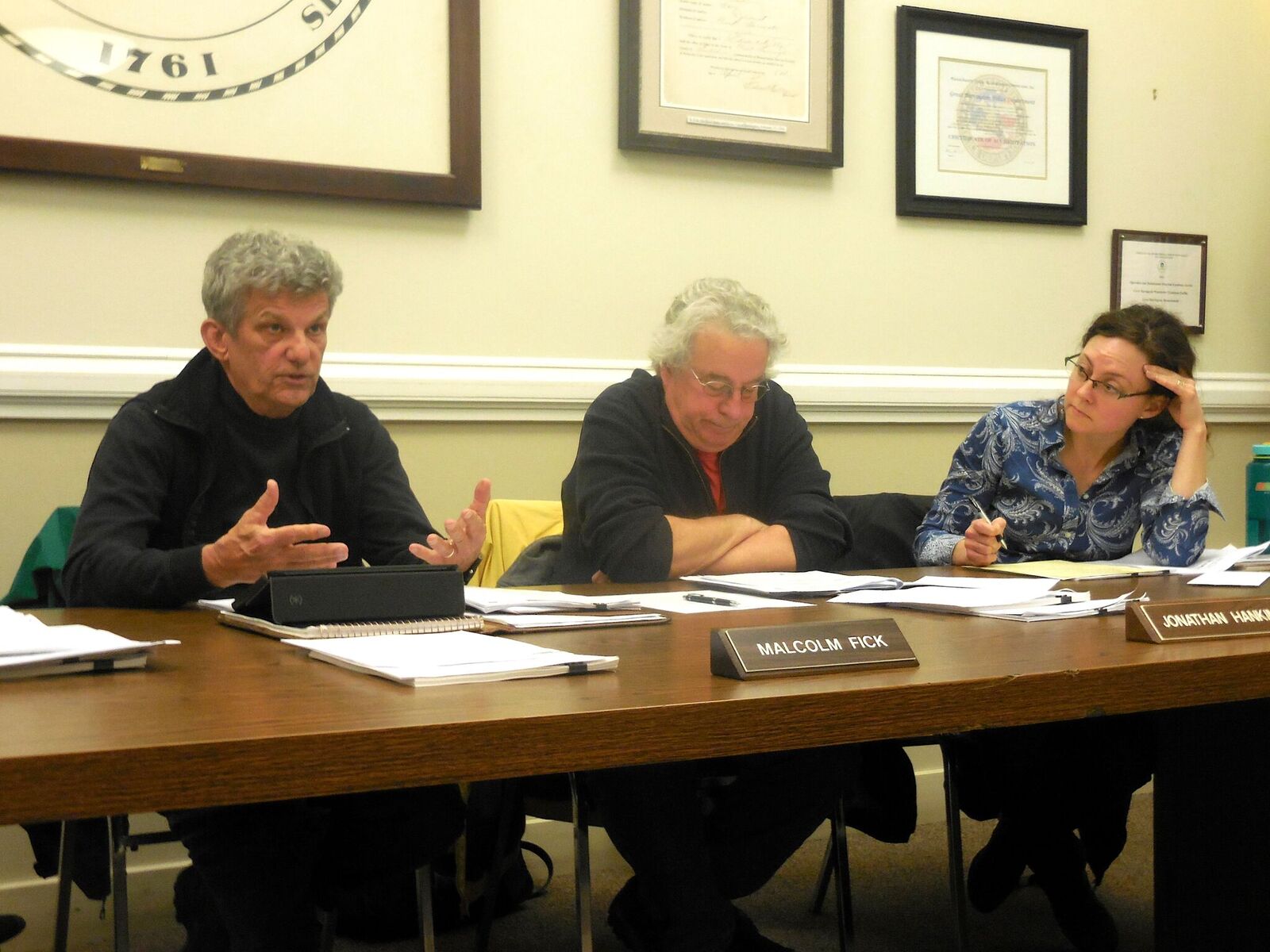 Great Barrington — Amid the turf war being waged between the planning board and selectboard over who should grant special permits for marijuana cultivation facilities, one bit of additional news has emerged.

At Monday’s selectboard meeting (April 9) during which a pair of planning board members sparred with the selectmen, planning board Chair Brandee Nelson told those in attendance, “Quite frankly, my dream is that the mills will get reused as growing facilities and come back on our tax rolls.”

Nelson did not elaborate but it was pretty clear she was talking about the Housatonic section of Great Barrington, since that’s the only place in the town where there are mills remaining. Selectman Dan Bailly, a Housatonic resident, shot back, “That’s your dream, my nightmare.”

The planning board, under the guidance of town planner Chris Rembold, has spent the better part of a year crafting a set of regulations to deal with the sale of recreational marijuana. Click here to see the final version that the planning board approved in February. The proposal will go before voters at the annual town meeting Monday, May 7.

The cultivation, sale and use of recreational cannabis-related products was legalized in Massachusetts through a 2016 ballot initiative. The measure passed by almost 7.5 percentage points statewide and by almost 30 points in Great Barrington. Implementation of the new law was left to the hastily created state Cannabis Control Commission. Sales are expected to begin in July at fully licensed and completed retail outlets.

Preceding that law, medical marijuana was legalized in Massachusetts in 2012 through the same process. In both cases, applicants must negotiate an agreement with the host community that typically results in revenue to the town based on the sales volume of the product.

If voters approve the Great Barrington bylaw, indoor cultivation of marijuana of the sort envisioned in the mills will be permitted by-right in the light industrial zone that covers much of Housatonic, including the Rising Paper and Monument mills. Click here to see the current version of the town zoning map. Or see the image of central Housatonic below:

That means a cannabis entrepreneur would not need a special permit to reuse one of those mills for that purpose, freeing a developer from the expensive and time-consuming process of hiring a team to navigate the process.

Finance committee candidate Michelle Loubert, who has lived in Housatonic for most of her life, told The Edge, “I don’t want my community to be known for its marijuana mills.” She applauded Bailly’s willingness to stand up for Housatonic.

“I would be happy to join forces with him to oppose it,” Loubert said. She did acknowledge “there are vacant storefronts on Main Street” but did not think an industrial-size cannabis manufacturing facility was a good fit.

“It’s a shame Great Barrington is willing to throw Housatonic under a bus for a quick buck,” Loubert said. Other Housatonic residents were not so sure.

“I don’t have a problem with it,” Carol Diehl said on Loubert’s Facebook page. “Now that marijuana is now legal to use, it can be produced legally, and its social effects are more benign than alcohol, which we take for granted.”

“No one would have a problem if a brewery were proposed for Housatonic,” Diehl continued. “Along with the tax benefits, which we need to relieve the burden on homeowners, it would also be an employer.”

Just how many people would an industrial-sized cannabis manufacturing facility employ and what kind of economic impact would it have? If a cannabis facility proposed in a neighboring town is any guide, quite a few and quite a bit.

In New Marlborough, a cannabis developer, Oasis Campus LLC, is applying for a special permit to build a sprawling cannabis production facility on an abandoned gravel pit near Lake Buel and abutting the Sandisfield State Forest off Route 57.

Peter Puciloski, the attorney for the applicant, said data from the state of Colorado, where recreational marijuana was legalized in 2012, indicate seven new full-time jobs per 10,000 square feet of growing space, which, in the Oasis proposal, totals a little more than 50,000 square feet. That would be at least 35 job skilled jobs, he said.

There is no such facility yet proposed in Great Barrington, so it’s impossible to know with any precision the economic impact it would have. The amount of property tax revenue generated depends of the size of the facility, its assessed value and the tax rate in the host town. Great Barrington’s current tax rate is $14.98 per thousand of assessed value.

But if the Oasis proposal is approved in New Marlborough, the developer predicts the town could see between $83,600 and $94,050 in real estate taxes per year. In addition, the equipment associated with the business would be subject to the town’s personal property tax, just as it would in Great Barrington.

Then of course, the Cannabis Control Commission allows municipalities to impose a community impact fee on cannabis manufacturers that “must be reasonably related to costs imposed upon the municipality and is capped to no more than 3 percent of the gross sales of the establishment or be effective for longer than five years.”

Next door in Sheffield, a pair of businessmen including Berkshire Mountain Distillers owner Chris Weld, has started construction on a combination cultivation and retail cannabis facility on Route 7 at the site of the former Shea’s Pine Tree Inn.

Click here to see the five-year host agreement approved by the Sheffield Board of Selectmen March 20. The fee is similar to the New Marlborough arrangement and will be in the amount of 3 percent of gross retail sales of usable marijuana. Weld guesses it could be worth hundreds of thousands of dollars annually to the town.

Revenue in that range could make a difference in Great Barrington, where upward budgetary pressures caused largely by the town’s funding obligation to the Berkshire Hills Regional School District result in the annual ritual of the cutting of town departments and programs.

Back to the mills in Housatonic. What makes them so suitable for growing marijuana and manufacturing related products? For that, The Edge turned to Jonathan Hankin, the planning board member who has argued most vociferously that his board — and not the selectboard — should be the special permit-granting authority for cannabis facilities.

Hankin, a real estate broker and retired architect, said the adaptive reuse of mills for the manufacture of cannabis has been proposed in several communities across the state.

In western Massachusetts alone, GTI Massachusetts NP recently opened an $8 million medical marijuana facility in a former paper mill in Holyoke. Other cannabis facilities have been eyed or proposed in empty mills or factories in Northampton, Athol and Lenox Dale.

“The advantages are obvious: You don’t have to build a building,” Hankin said. “Typically, mills have a pretty decent clear span. There’s not a lot of walls you need to take out, and no bearing walls — just posts. They’re made for this sort of thing.”

There is no proposal yet on the table for the reuse of one of the old mills as a cannabis facility in Housatonic, but there was a redevelopment plan in 2011 that included Monument Mills. It was put forward by Florida developer Stephen Muss.

Muss essentially proposed a riverfront village center that would have included a new firehouse, an amphitheatre along the Housatonic River, a riverwalk, two new pedestrian bridges between the village and the mills, a specialty marketplace, a culinary school, a coffee shop, a gym, office space, an inn, residential housing, art galleries including a satellite facility of the Massachusetts Museum of Contemporary Art, a parking facility and roundabout.

The board of selectmen seemed inclined to support the project but Whitmore “Nick” Kelley, who has owned Monument Mills since the 1980s, insisted he had his own plans to redevelop the mill.

It’s fair to say that the mills in Housatonic are not entirely unused. Parts of them house offices, a dance studio and even a small paper company operation. But they are terribly underused by virtually anyone’s reckoning.

An entrepreneur has approached the selectboard about opening a retail cannabis store in Great Barrington. At the March 26 selectboard meeting, Donna Norman of Calyx Berkshire Dispensary in Otis said she is interested in opening a retail store in town. Selectboard Chairman Sean Stanton urged her to schedule an appointment with Town Manager Jennifer Tabakin.

See video below of Norman’s presentation to the board: