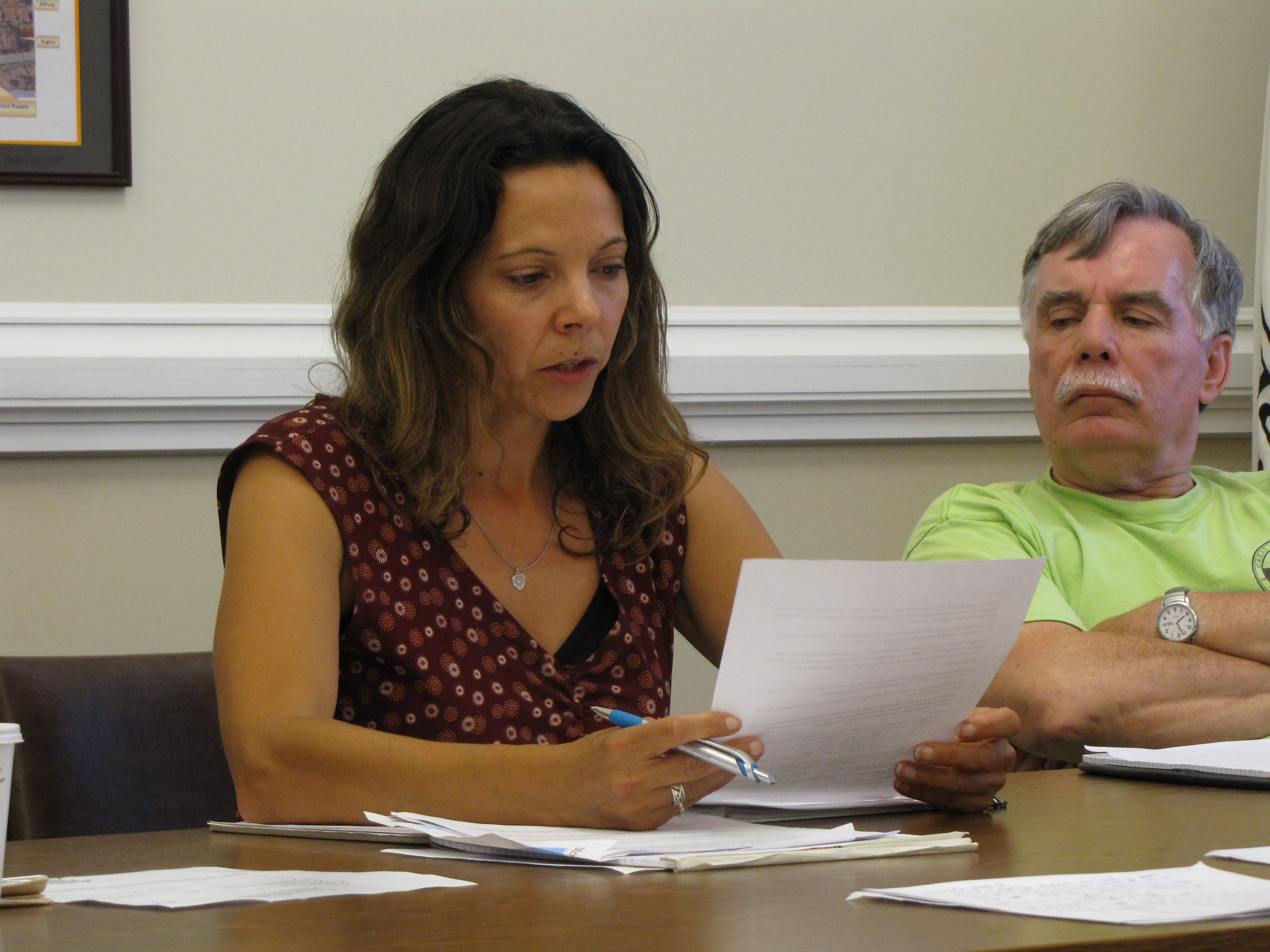 n this file photo Leigh Davis attends a meeting as a member of the Great Barrington Finance Committee. To her left was fellow Finance Committee member Walter F. 'Buddy' Atwood III, who is now seeking to regain his seat on the committee. Photo: David Scribner

Editor’s note: this story has been revised to include additional sponsors of the upcoming candidates’ forum.

Great Barrington — The spring municipal elections in Great Barrington just got a little more interesting. Instead of two incumbents running unopposed for re-election to the selectboard, a third has stepped up to challenge the status quo and make it a race.

Leigh Davis, a popular face in town and a former member of the Great Barrington Finance Committee, has turned in papers to run at-large for two seats against incumbents Steve Bannon and Dan Bailly, both of whom have also turned in petitions to secure a spot on the ballot for the May 14 annual town elections.

“I have a broad range of experiences that I would bring to the board,” she told The Edge in an interview and an e-mail exchange. “Using a multi-pronged, long-view approach, I’d like to see the selectboard focus on ways to attract more families and businesses to relocate to Great Barrington so that we can grow our tax base and address our affordability issues.”

Among her issues, Davis says, are focusing on shared services with other towns to reduce costs, economic development incentives such as better access to broadband, affordable housing and “providing leadership and vision in the managing of town properties.”

Davis has been active professionally in the town of Lee, where Mill Renaissance LLC is planning a major reuse of the old Eagle Mill. As development director for Mill Renaissance, Davis and her boss Jeffrey Cohen have been working with Christopher Ketchen, who, as part of an agreement with the two towns, was named town manager for both Lee and Lenox two years ago.

“I’ve been working closely with Chris Ketchen, so I’m able to see how it can be done and some of the successes there,” Davis said, adding that she is not singling out any specific department in Great Barrington for consolidation with other towns, but would like to study the subject further.

Speaking of Housatonic School, it is one of several town-owned properties — or properties that were formerly owned by the town — that are sitting vacant or idle. In addition, there is the old Castle Street firehouse, the former Searles Middle School and Cook’s Garage, which the town acquired recently after nonpayment of taxes and is studying a clean up with the help of a state brownfields grant.

“We need to be thinking strategically about these things,” Davis said.

Asked how her term on the finance committee has informed her thinking, Davis replied, “I view my three years as a member of the finance committee as a valuable and impactful stepping stone to serving as a selectboard member. If elected to the selectboard, I feel I would be more attuned now to ensuring that best cost management and accountability practices are followed, with further checks and balances put in place.”

If elected, Davis would bring a diverse professional history to the board. She has a background in media, having studied screenwriting in Ireland, where she also taught film at the Galway-Mayo Institute of Technology. Click here to view her LinkedIn profile.

Davis likes to joke about how she ended up in the Berkshires. She was on vacation from her job in Ireland and passing through Great Barrington in December 2007, when she was stranded by a snowstorm. After spending the night in a hotel and taking a walk to Lake Mansfield the following morning, Davis was struck by its beauty and realized she had found the place where she and her three children wanted to live.

“I literally came to town with a snowstorm,” Davis said.

Since then, she has held a variety of volunteer and professional positions: marketing director at the Mahaiwe and at the Berkshire Eagle; marketing consultant at Construct Inc.; volunteer at Fairview Commons, St. James Place and Volunteers in Medicine.

Davis also touted her work on the redevelopment of Eagle Mill, where she has collaborated closely with state and federal agencies, state representatives, and town boards “to transform our area’s historic mills into vibrant community assets, affordable housing opportunities and economic drivers.”

“The work I do provides me with unique insights into how Great Barrington might better leverage state and federal monies, pursue shared services, and develop creative partnerships which would help to strengthen and sustain our community,” Davis explained.

Davis is a Democrat but that’s largely immaterial since Great Barrington’s town elections are nonpartisan; anyone can get on the ballot with a petition containing the certified signatures of 28 town residents.

She will be running at large against Bannon and Bailly, with the top two vote-getters winning seats on the selectboard. Davis insists, however, that she hasn’t set her sights on unseating either of them in particular.

“I’m running for selectboard to serve the community of Great Barrington, not to displace either Steve or Dan,” Davis said. “By running, I feel that I am able to offer a fresh voice and perspective to the town, buoyed by my broad of range of experiences and knowledge.”

In other contested elections for town panels, incumbent Finance Committee Chair Tom Blauvelt is running for re-election but fellow member Janet Lee is not. Lee’s husband Tim is now principal of Muddy Brook Elementary School, so Janet perceived a possible conflict of interest since the finance committee scrutinizes the budget of the Berkshire Hills Regional School District.

At the Housing Authority, only one member is up for re-election: incumbent chairperson Karen Smith. She is being challenged by Eileen Mooney, publisher of The NEWSletter, a monthly publication containing news of the Great Barrington government.

The NEWSletter, along with the Democratic and Republican town committees, will also sponsor a public forum for all candidates, opposed and unopposed, on May 1 at 6:30 p.m. at the Claire Teague Senior Center.