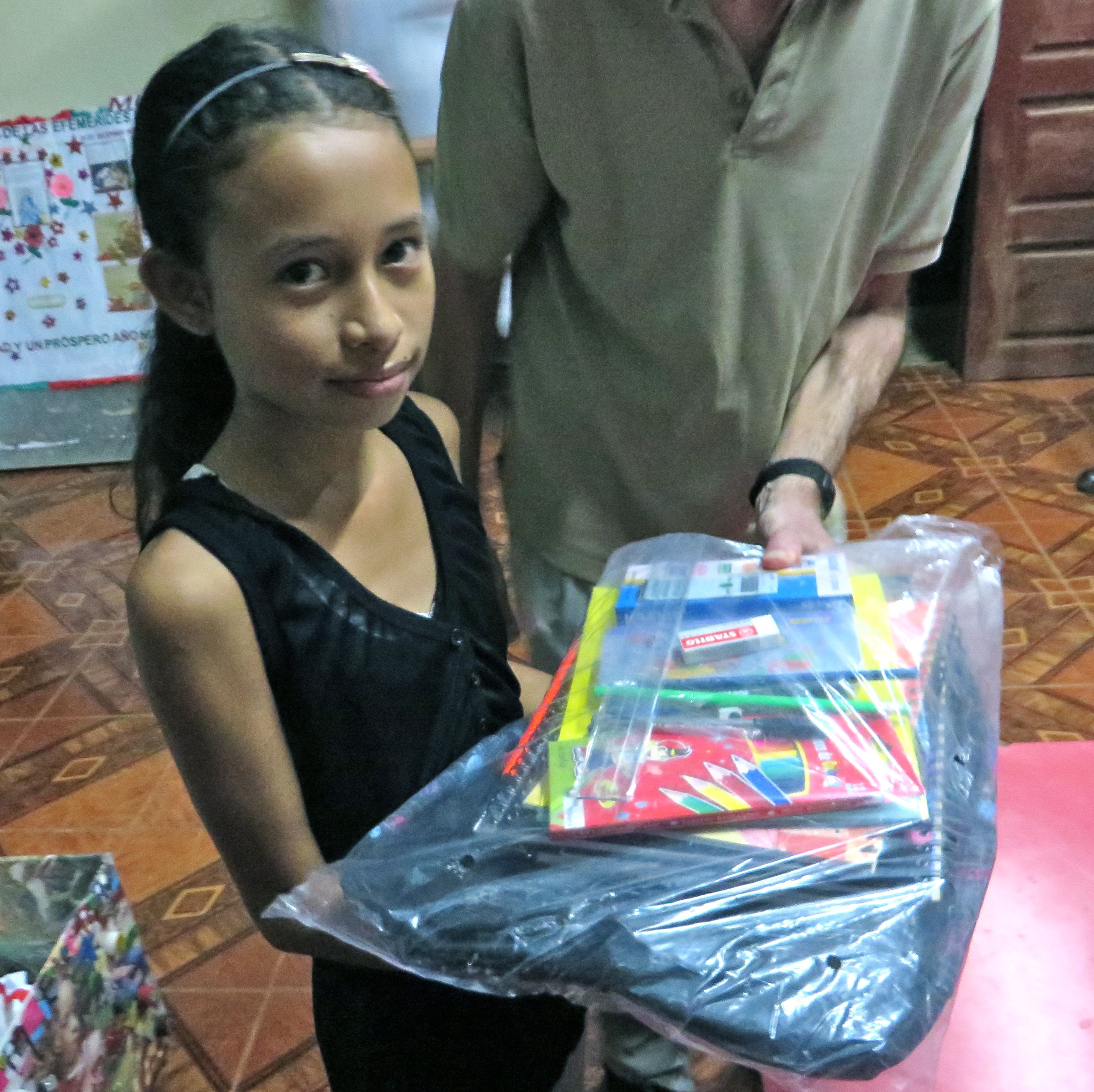 “Girls’ education is the single best investment that any society can make.” —Carol Bellamy

Maipaisillo, Nicaragua — Although I hadn’t seen her in eight years, I recognized the smile immediately. The young woman at the door of the library was Ana Waleska Leyva, accompanied by her two young children and her mother. I saw her soon after I arrived this January in the rural town of Malpaisillo, Nicaragua, to meet with the volunteer committee that administers Fundacion Juanita, a memorial scholarship project that enables girls from families with limited resources to attend public high school. Ana is a former becada, or scholarship recipient. She stopped by to say hello and proudly related her story: after high school she attended university for two years, then suspended her studies to have two children, and was now back in nursing school.

Her story is but one of many from more than 60 girls who have graduated from high school in Malpaisillo because of financial help provided by Fundacion Juanita. The foundation has its roots in the Columbia County-Malpaisillo Sister-City Exchange, an offshoot of the Pittsfield-Malpaisillo relationship called Berkshire Amistad. The exchange was founded in 1987 after a delegation of 13 Columbia County residents, including my late wife Joani Unger and I, visited Malpaisillo as part of a network of U.S. cities that sistered with similar Nicaraguan cities as a proactive, positive means of protest of U.S. policy in Central America. The project flourished for nine years with the exchange of delegations between the two communities, the provision of aid to the health care and educational facilities in Malpaisillo, and the construction of a major new water supply system for the town.

Tragically, in 1996 Joani was diagnosed with cancer. She had become the guiding force, energy, and spirit of the sister-city project, and after her passing at age 47 in 1998, the program collapsed. I traveled to Malpaisillo in 1999 to establish a memorial project to celebrate Joani’s (Juanita, as they affectionately called her in Malpaisillo) life and her dedication to the town. The sister-city committee in Malpaisillo unanimously suggested a scholarship project, called “Fundacion Juanita,” to enable girls from low-income families to attend high school. They explained that boys’ education is prioritized, and girls from large families are often denied the opportunity to attend high school. The scholarships would be in the form of school supplies, with recipients selected by financial need and academic promise. I felt that this project would be a fitting tribute to Joani, who was a committed activist for women’s rights and education.

Fundacion Juanita raises funds in the U.S., but supplies are purchased locally by the committee. Aside from the normal school necessities, the list of items provided include a multitude of notebooks, as many classes have no textbooks and students must copy class lessons from blackboards. The girls also receive white socks and yards of cloth, from which their mothers make school uniforms. In addition, the family receives cash to purchase a pair of shoes for school.

I was at the Malpaisillo library on the first day of my visit to participate in the ceremonial delivery of school supplies to the scholarship recipients for the coming semester. A group of 20 girls were waiting for me in the front room of the spare, two-room library, along with their parents — mostly mothers, as many of the girls come from single-parent families. After an introductory speech by Isabel, the town’s librarian and head of the scholarship committee, two of the mothers stood up and delivered emotional statements of gratitude, explaining how these scholarships for their girls make such a huge difference in the lives of the entire family. Another mother proudly handed me a graduation photo of her daughter. As I gave each student a large package of school materials, I could feel their pride in their accomplishments.

Many Fundacion Juanita graduates have continued their academic careers at universities and technical schools and are now employed in various fields, such as law, medicine, and education. One is now teaching in the high school in Malpaisillo. Isabel related the details of Fundacion Juanita’s greatest success story: Aleyda, an orphan raised by a neighbor family, graduated at the top of her high school class and received a scholarship to study medicine in Cuba. One day, Aleyda came to Isabel in tears because she didn’t have the $250 needed to fly to Cuba. Fundacion Juanita was happy to buy her a plane ticket. She received her medical degree and is now working as a physician on the east coast of Nicaragua as part of her government service.

After starting with just five scholarship recipients, Fundacion Juanita now funds 20 girls a year. However, there are many more girls in Malpaisillo who could benefit from the opportunity to go to high school and learn skills for productive employment. In order to facilitate wider outreach and networking for my small project, and ensure that it continues into the future, on my current visit I initiated a merger with a much larger 501(c)(3) non-profit organization in the education and sustainable development field, FNE International (FNEI), headquartered in Boston. FNE stands for facilitate, network, and empower — aligned with my philosophy for foreign solidarity projects. Now, Fundacion Juanita joins FNEI’s other scholarship and educational projects in Nicaragua, and will benefit from FNEI’s expertise and the presence of trained staff based in the region. A meeting with both groups solidified the relationship, and two joint activities for the scholarship students were planned for the coming year.

Although the merger of the two organizations was the main focus of my visit, I took time to tour some of FNEI’s impressive construction projects: a beautiful new library and one of the 125 family homes they have built in the nearby town of Chacraseca. I also called on some of the many friends that I have made in my nearly 30-year relationship with Malpaisillo. On the last day, I attended the traditional fiesta in honor of Fundacion Juanita, enjoying a potluck meal prepared by the girls’ mothers, party games, and lots of music and dancing. The people of Malpaisillo are so warm and fun-loving, it’s impossible not to fall in love with them.

Sadly, we said our farewells, and, driving off past stunning views of the recently erupted volcano, Momotombo, toward Leon, I recalled leaving Malpaisillo in the back of a pickup truck after my first visit there when one of our group broke out in the refrain “I left my heart in Malpaisillo.” That sentiment still remains.

My hope is to involve my new community, the Berkshires, in supporting this project. If you have any interest in helping the scholarship program or have any questions, please go to the FNEI website, fneinternational.org, and look for Fundacion Juanita on the “Our Work” page or contact me at garystoller@yahoo.com.