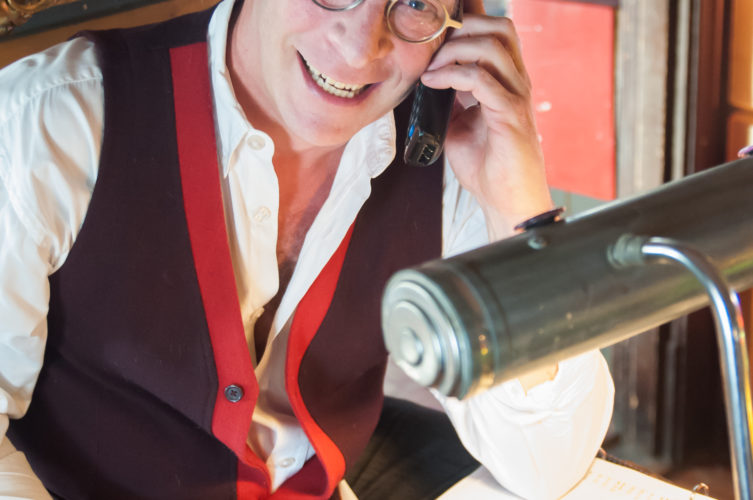 If ever there were a play designed for the nimble actor and real-life restaurateur Daniel Osman, it is Becky Mode’s comedy, “Fully Committed,” first produced off-Broadway in 1999. It calls for one actor to play 39 roles, some only a few lines long.

In a new production from Nicki Wilson’s New Stage Performing Arts, “Fully Committed” opens April 26 at Mixed Company in Great Barrington and runs through May 11 (and perhaps beyond), under the direction of Joan Ackermann.

In a whirlwind of character changes, Osman is, in turn, Sam, an out-of-work actor with a job as a beleaguered reservationist for an upscale, upper East Side restaurant in New York City, and then the voices of the 39 other characters whose frantic demands and ill-temper Sam must deal with over the phone. Sam is working in a dilapidated basement; the trendy, fashionable restaurant that the clamoring clients seek is upstairs.

This may seem to be a mild case of reality becoming art, for, in fact, Osman himself often appears – if not beleaguered, then consumed – by his real-life, off-stage role as proprietor, manager and impresario of the Dreamaway Lodge, that clubhouse and performance space for the imaginatively inclined in the wild mountain woods of Becket.

But Osman insists the correlation, while imprecise, is both challenging and inspiring.

“It’s not my story, it’s not a play about me,” he commented, speaking by phone from the Dreamaway. “I’m at the top of the mountain, and he – Sam – is in the basement. Still, there are so many places where I can connect to it. This stuff is in my bones. I’ve been an unemployed actor. The more I became Sam, the more he took me back to my early days in New York.”

And his fondness for the play has grown, he notes, as he’s prepared his many roles.

“It’s a dear play, and dearer every time I do it,” he said. “At first, I couldn’t understand how it could be done – one person playing those roles. I couldn’t fathom it until I did. But the more I lived the story, the more I found it to be deeper. This is a much bigger play.”

At the same time, the role itself is daunting.

“When I heard about this play last summer – and then read it – I thought Danny would be perfect for it,” Wilson recalls. “I’d worked with him three years ago when he played Solange in Jean Genet’s ‘The Maids,’ and I knew he was adept at different roles. Besides, I always wanted to work with him again. He’s the reason I’m doing this play.”

“This is really a tour de force for Danny,” said director Joan Ackermann. “It’s not as if he has to memorize the lines for one character. He actually has to learn 39 different roles. But he is a wonderful actor, and is great to work with. I think audiences are going to find it very entertaining. He is acting both the straight guy dealing with insane people and the insane people, too.”

She points out that the role was written for a character in his 20’s.

“The challenge is to transpose the part from a young man to one who is middle aged,” she said. “And it has been fun to figure out what qualities and sense of the absurd of a younger man you can maintain in an older man. I think we found it.”

She observes that as an older reservationist – and actor without a recent gig — the character of Sam becomes even more poignant.

“Sam doesn’t even have airfare to visit his father who is ill, and he hasn’t had a role in a long time,” she notes. “He gets calls from friends who ask, ‘Are you still there?’ There is a real arc to the play.”

Assisting Ackermann in the production is stage manager Rudi Bach, who not only created the set but is also the sound and lighting director.

The play runs one hour, 10 minutes, Thursday through Saturday at 7:30 p.m. at Mixed Company on Rosseter Street. Matinees are at 3 p.m. on Sundays. Tickets for the previews on April 24 and 25 are $15; tickets for the run are $20. For reservations call the Mixed Company box office at 413-528-2320. For further information: www.newstageperformingarts.org.