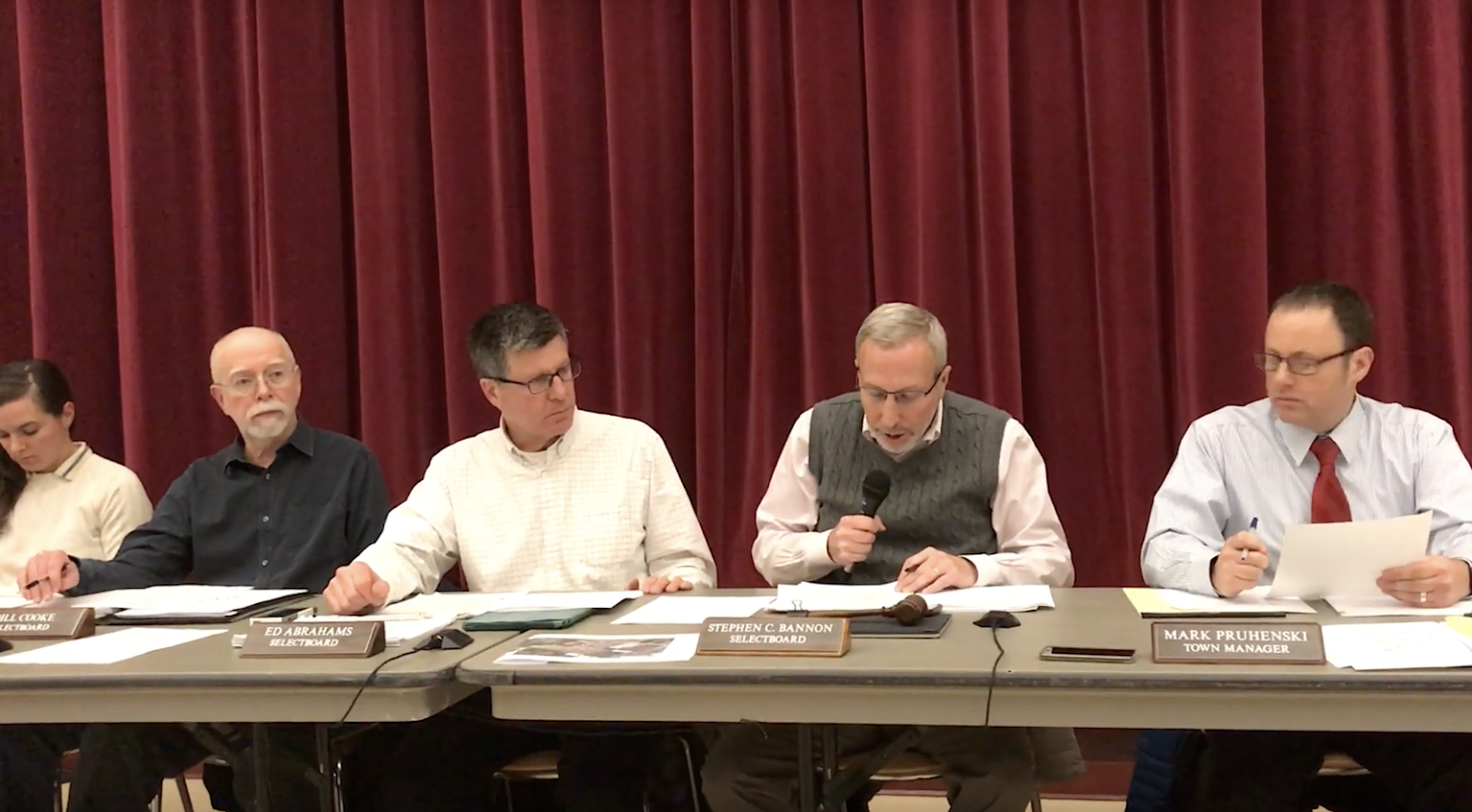 As expected, Fulcrum Enterprises withdrew its proposal to grow cannabis and manufacture related products in the former Nolan gravel pit across from the Formel junkyard at 22 Van Deusenville Road. In a meeting held Monday night at Monument Valley Regional Middle School to accommodate the expected overflow crowd, the selectboard voted unanimously to grant Fulcrum’s wishes to withdraw its application for a special permit, “without prejudice” — meaning that the company could resubmit its proposal for consideration at a later date.

See video below of Fulcrum attorney Kate McCormick explaining her client’s request and the selectboard’s discussion and vote:

Before the vote on the company’s request, selectboard Chairman Steve Bannon read a letter from Mitchell Greenwald, a Pittsfield attorney representing two couples opposing the project: Bruce and Michelle Loubert and Trevor and Denise Forbes. Click here to read it.

Fulcrum attorney Kate McCormick indicated that there were delays in the studies required of the applicant on sound, noise and odor and the peer reviews of those studies by the town. The sound study commissioned by the town, for example, was only made available on Friday.

“There was not enough time to address the findings specifically with the experts,” McCormick said. “None of these timing issues were intentional on anybody’s part. Withdrawal will allow my client to focus on open items, which is sound and odor.”

Before the unanimous vote to accept Fulcrum’s request, selectboard member Leigh Davis voiced her disappointment that company officials did not disclose their decision to alter their plan at Fulcrum’s community outreach meeting on Dec. 30.

At that community outreach meeting, Fulcrum representatives announced that they had scaled back the total square footage of the greenhouses to approximately 58,000 square feet from 80,000 square feet — a difference of some 22,000 square feet.

However, in order to make up for the lost space, Fulcrum told the planning board a few days later that it wanted to equip the greenhouses with heat and lighting to extend the length of the growing season. Previously, the company had said there were no plans to array the greenhouses with such equipment.

“I kind of felt that … it was little but like moving the goalposts once the game started,” Davis said.

McCormick explained that the change had not yet been presented formally before any town boards and so her clients did not feel it would be appropriate to disclose the alterations at the community outreach forum, which is not a town meeting but one that is required by law by the state Cannabis Control Commission. The omission was made, McCormick said, “out of respect for the hearing process.”

It would have been a long night if the special permit application had not been withdrawn. There were 73 pages in the meeting packet related to Fulcrum’s application. Click here to see the documents, which include the aforementioned impact studies and peer reviews, along with numerous statements from abutters and other neighbors.

Also in the packet was a statement from the Berkshire Environmental Action Team. BEAT did not come out against the proposal but wanted to see an independent environmental impact assessment, requested that the operations be powered by renewable energy, and sought assurances from Fulcrum that its projected $300,000 payroll be comprised of “well paid union jobs which will strengthen our community and encourage young people to come back to the area.”

See the video below of part 1 of the audience comments on Fulcrum’s proposal:

After the vote, during the citizen speak portion of the meeting, several neighbors, including Michelle Loubert, both Forbeses and former Selectman Douglas Stephenson, reiterated their opposition to the proposal even though it was no longer on the table.

Several complained about the impact on property values. Others were concerned about health impacts. Still others reiterated their concerns about Fulcrum, offering the assessment that the company had been dishonest during the permitting process.

Some speakers suggested the selectboard should have opposed the project from the beginning. Loubert, a member of the town finance committee, complained of having to hire a lawyer. Stephenson said Fulcrum was less than honest about heating and lighting the greenhouses during the community outreach meeting.

“So they lied to us,” Stephenson said. “They’ve got no integrity. They’ve got no character. They’re not the type of people we need in our community. If they come back with another proposal, I’m telling you you should shoot them down.”

See the video below of part 2 of the audience comments on Fulcrum’s proposal:

“I am very, very angry over this project,” Loubert said, adding that she has lost friends over the project and “worse yet, I’ve lost respect for some people.” Loubert further chastised the board for “entertaining” the project at all.

Selectman Ed Abrahams pushed back at some of the comments at the end of the meeting. He took issue with audience members who said of the five-member board, “You have failed us” or “How could you even consider this?”

“Legally, we have to consider it,” Abrahams said. “I’m so glad we don’t live in a community where five people get to say, ‘I don’t care how people voted at the meeting. We’re going to do it, or we’re not going to do it.'”

Abrahams noted that at the first hearing on the project, a rowdy session at the Claire Teague Senior Center in September, Bannon allowed lengthy comments from the public that ran so long that the board scarcely had time to ask questions itself.

“Personally, I have about 25 questions covering a lot of the subjects that have been brought up by neighbors,” Abrahams said.

Of a recent correspondence, Abrahams said: “I got a letter saying it’s time you started listening to us, and I just want to be clear: You haven’t heard anyone on the board say anything in favor or against. All we’ve done since [the process] started is listen.”

McCormick did not give a timeline of when Fulcrum might want to restart its special permit application process.