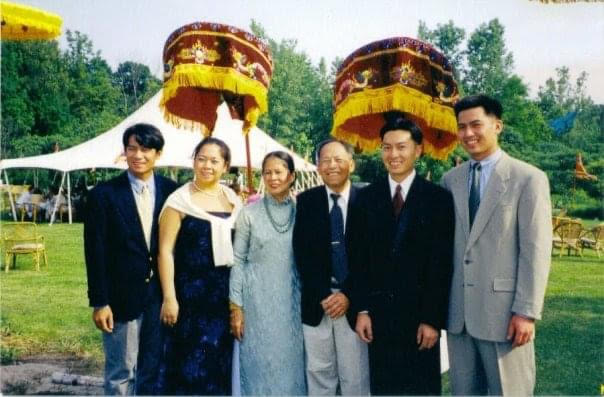 The Nguyen family celebrating 21 years of business in the Berkshires, at Truc's Orient Express, in 1999. Photo courtesy Truc Nguyen

West Stockbridge — A longstanding joke in the Nguyen Family revolves around the moniker of the family business. Truc Nguyen was just 5 years old when her family immigrated to the United States from South Vietnam in 1975. As the only daughter of Luy and Trai, Truc was raised to be very humble; when her family arrived in the Berkshires in 1978 to open Truc’s Orient Express, her father told patrons (with a wink) that he chose the name because it meant “little bamboo” in their native Vietnamese. “It’s symbolic, in a sense, that they named me to be resilient and flexible and strong,” said Truc, who, over the past two years, has slowly transitioned to taking over the reins of the little red restaurant in West Stockbridge that, in addition to bearing her name, her parents built from scratch more than four decades ago.

“It could have been a self-fulfilling prophecy,” Truc told The Edge in a recent phone interview, “that [my parents would eventually] need someone to take over.” Her father, Luy, died in December 2018; her mother, Trai, has spent much of the past year in Vietnam, a tradition that began 15 years ago when the couple realized they could work incredibly hard for the six months surrounding the summer season and close for the winter. “When [my father] passed away, it made a lot of sense to seriously transition back here to be closer to Mom,” Truc said of the family matriarch who “let go of the [restaurant] reins last year.” Her earliest contribution to the family business came when she was just a kid: Her parents would plop Truc and her three brothers in front of the TV where they assembled egg rolls and shrimp rolls while earning money for “things [they] wanted growing up,” like sneakers and skis. The underlying message was clear: If you want something, you must work hard for it — an ethos the Nguyens modeled for their family.

“They made this happen out of thin air,” Truc said of the family’s restaurant, adding, “nothing was ever given to them.” In fact, when one peels back the layers and examines the family success, Truc attributes much of it to luck: “Someone passing your path, and giving you a chance to shine,” which is exactly what happened when Berkshires-based entrepreneur Gordon Rose happened upon the Nguyen’s diner in Hartford (where they spent their first three years in this country). Trai mastered American favorites, which were served at the countertop eatery for breakfast and lunch; at dinner, she offered two traditional Vietnamese dishes. When Rose stopped in for dinner one night, he was struck by the traditional cuisine — new to the American palate — and devoured all the dishes Trai had to offer. He ultimately returned to the diner and proposed to the Nguyens that West Stockbridge, where he had business interests, would be an opportune locale to open a restaurant, citing “a dearth” of quality Asian restaurants in the area. The rest, of course, is history.

Today, Truc alludes to this “winning combination” that led to her family’s success: “You have to have your own fortitude — believe in yourself — and someone to believe in you,” she explained. Truc never grew up with any pressure to take over the family business; in fact, after graduating from Monument Mountain Regional High School and then college, she moved to New York City, where she pursued a career in financial communications for publicly traded companies. “They were not that type of parents,” Truc said, calling them “very atypical in how they raised us.” Case in point? Back in the day, specialty ingredients were hard to come by in the Berkshires, so it was not unusual for Luy and Trai to spend their day off from the restaurant travelling to New York City’s Chinatown to procure ingredients. Truc remembers being 10 or 11 on one such occasion when, not realizing the restaurant was closed, one of her father’s friends arrived from New York to have lunch. Truc greeted them at the door with a proposal: We are closed, but if you trust me, I will make what I can. “I must have hit it out of the ballpark,” she said, as evidenced by the lovely note her father received soon after. “He was so proud,” said Truc of this moment that, in hindsight, absolutely built her confidence.

Despite their many blessings, the Nguyen family has persevered through much adversity. Their immigration story is equally tragic and inspiring, as detailed by Peter Dolan’s “In Remembrance of Luy Nguyen,” which appeared in the West Stockbridge Local Yokel following Luy’s death in December 2018. Dolan explained:

“Since 1968 it was common knowledge that the Viet Cong, a communist regime backed by China and Russia, ruthlessly hunted down and executed any South Vietnamese citizen who had, even indirectly, worked with the Americans. The North Vietnamese were very well-informed, evidenced by the mass reprisal executions that transpired in the city Hue during the NVA’s month-long seizure of that city. Nguyen and his wife now faced mortal danger: Luy was the youngest ever to graduate from South Vietnam’s Naval Academy, granted a waiver of the minimum age requirement after his mother signed the permission form, and had achieved the highest rank, commander, in the South Vietnamese Navy. His wife, Trai, with the same vision and commitment for a democratic Vietnam, had worked since 1963 at an American military administration building in her hometown of Nah Trang. She was a valuable resource and had quickly become a confidant of several American general officers … Among his many responsibilities during these years of war, Commander Nguyen led riverboat crews and his American advisers during dangerous missions patrolling the narrow rivers and shallow coastal waters of South Vietnam. By 1975, he had amassed a chestful of medals including the U.S. Naval Commendation Medal, significantly, with a ‘V’ for valor … On April 29, 1975 at 10:48AM, the American radio network in Vietnam broadcast Irving Berlin’s song ‘White Christmas’; Luy knew exactly what it meant. The song was the predetermined signal to all American military personnel in Vietnam and their South Vietnamese allies, indicating an immediate emergency evacuation. It was to be broadcast only if the Pentagon’s worst case scenario had been realized … One week earlier, Luy and his wife had sent their eldest son, Lam, six years old at the time to spend a few days visiting his grandmother in Saigon. The family was at the South Vietnamese naval base, located just outside of Saigon. ‘White Christmas’ on the American station presented the couple with an excruciating choice: stay and wait for Lam’s return or evacuate with their three younger children and trust that relatives would provide sanctuary to their son. Option 2 meant leaving their child behind which would seem out of the question until considering the consequence of staying … The young family was forced to flee, to leave behind their son and beloved homeland, where both husband and wife could trace their ancestry back over a thousand years … the family’s future was unknown … they finally arrived in the United States on July 4, 1975. In the two months of uncertain waiting, Luy was a living embodiment of the Buddhist tenet he learned many years earlier: never succumb to despair.”

This philosophy, in large part, has sustained the Nguyen Family, who sees food as love, through their decades in the Berkshires. Truc Nguyen has leaned into the lessons learned from her father over the past six months in particular, which is why she has remained open for take-out since the pandemic began. It’s her small way of giving back to the community that so graciously welcomed them years ago, and keeping her family’s legacy alive. “How proud my parents are to share our culture with the people of the Berkshires, and how honored I am to continue this tradition through our cuisine and gift shop,” Truc said. As Tet Trung Thu, or Mid-Autumn Festival, is being celebrated in Vietnam and across much of Asia (when rice is harvested before the 15th day of the eighth lunar month, or mid-autumn), this sentiment feels particularly auspicious. “I think having access and exposure to each other’s culture enriches us as a community,” said Truc, a testament to her family’s chosen livelihood.

“I’ve been following my mom in this kitchen, watching her cook this food, absorbing [her knowledge] through osmosis, since I was 8,” Truc said. This rich tradition has instilled in her a real desire to address what she calls the anthropology of food; in particular: How do families pass their recipes from generation to generation? In Truc’s estimation, “It’s just being together in the kitchen; [my mom and I] just happened to be in a business kitchen.” The food at Truc’s Orient Express is not to be missed. The family’s vegetarian pancake recipe “put four kids through college” and was recognized as one of Food and Wine’s Top 30 Recipes of All Time; the lemon mousse (which, along with the aforementioned pancake, my daughter and I devoured at a table in TurnPark Art Space just last week) is divine. What I’m really tasting, I now understand, is a family’s passion for working hard no matter the obstacles.

Truc’s Orient Express remains a family affair. The Nguyens have four grandchildren, two of whom travel to the Berkshires from San Francisco every summer, without their parents, ”just to be with their grandparents and to be part of the family business. Two others, who now live in Paris, have spent the past three summers here, eager for “a chance to be part of, and contribute to, the magic” that Luy and Trai established. “It’s what they long for all year,” said Truc of her nieces and nephews, calling it “a testament to my parents, [and] that dust that they kind of sprinkled on all of us that keeps on bringing us back.” Truc’s brothers are far-flung: One is in San Francisco; one is in Paris; and Lam returned to Vietnam, to Ho Chi Minh City, as a young man. “[Our parents] taught us all to rise to the occasion,” Truc said, adding, “you are not going to get what you want sitting back and waiting.” Taking the easy way out has never been on any of their radars and so, they collectively persevere. “We have all contributed to the family business, I just happen to be physically here to pick up the baton.”