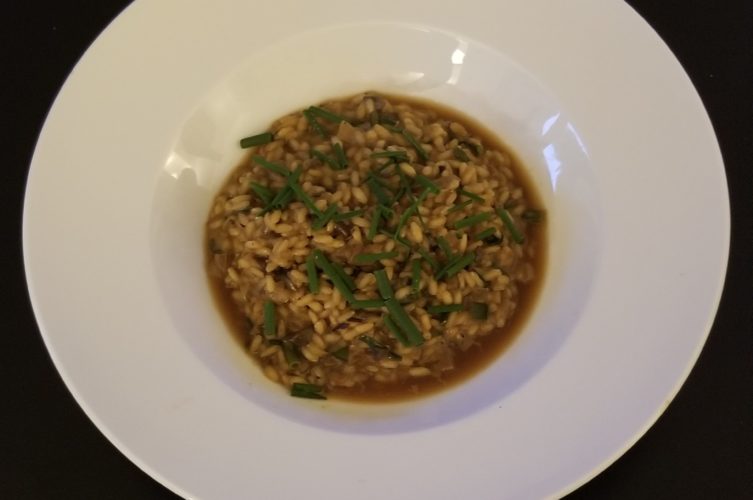 I’ve always loved rice. When I was a kid, my favorite meal, my birthday meal, was creamed curried tuna served over rice, which became referred to as simply “tuna fish on rice” in our house. My preteen years, when my addiction to tuna fish on rice was in its early stages, were spent during the ‘50s and early ‘60s. My family was like a square peg in a round hole during those very conformist years, so it wasn’t surprising most of my friends didn’t have a clue what curry was, much less how to combine it with canned tuna in a white sauce over rice. It was mostly just plain weird then. Even in this much more enlightened culinary environment, I still elicit looks somewhere between amusement and horror when I describe it. Nonetheless, forever the square peg, it remains my ultimate comfort food and I’ve made only one adjustment from my mom’s preparation.

Preparing it involves making a white sauce seasoned with curry powder (McCormick’s is mandatory for me!), stirring in solid white canned tuna broken into chunks and serving it over rice. My one adjustment from my childhood version is that I usually use brown basmati rice rather than Uncle Ben’s Converted Rice. Uncle Ben’s still works for me, but never, never instant rice. I can remember my mom trying to sneak instant rice by me during those TV-dinner years and not being happy at all! Being a rice lover, I find instant rice probably having a better use as wallpaper paste than as food.

Over the years so many of us have broadened our horizons regarding rice as new varieties have found their ways onto supermarket shelves. I can’t think of a variety I haven’t liked. The rice varieties consistently stocked in my pantry are my favorite all-purpose brown basmati, jasmine for Asian stir fries, Uncle Ben’s for going down memory lane and Carnaroli for risottos.

It being the spring foraging season, I’d like to share a risotto recipe using morel mushrooms and ramps. The wonderful thing about risotto is it’s like a blank canvas, providing a relatively neutral base allowing whatever ingredients are added to shine. Its creaminess just makes everything better. Being a creamy rice dish, risotto checks the tuna-fish-on-rice comfort-food box for me.

For those of you new to preparing risotto, it needs to be made with any number of the short-grained Italian rice varieties of which Arborio is by far the most widely available. My preference is the Carnaroli variety, often referred to as the caviar or king of rice. However, Carnaroli is not as widely available and the differences are relatively minor, as all Italian rice varieties used for risotto are relatively short and plump and contain a high proportion of a starch called amylopectin.

Risotto with morels and ramps

There are a few things I’ve learned about risotto over the years. A successful risotto should take about 20 to 25 minutes to cook while consistently stirring and adding hot broth until each ladle is absorbed before adding the next ladleful. It’s this technique that keeps the rice from stewing and becoming mushy while most efficiently releasing the starch thickening the broth and giving risotto its characteristic creaminess. Its magic is that it’s creamy without using cream.

I start testing the rice for doneness every minute or so somewhere around after 15 minutes and stop cooking when the grains are no longer chalky in the center and are firm and chewy. Risotto will continue to absorb liquid after being removed from the heat, so it needs to be served immediately as the best risotto should be served very slightly soupy as well as al dente. The trick is to plan ahead and have everything in order — your mise en place — so that the steps are effortless, and it can be served as soon as it’s plated. Once everything’s in place (including those you’re serving it to!), you can just relax, stir and let the magic happen.

As far as ingredients are concerned, use any substitutions you wish. Onion, garlic, leeks and shallots or a combination are easily substituted for the ramps. Any dried or fresh mushrooms can be used for the morels. When using a canned or paste broth, I usually dilute it with water by half, as I want the flavors of the ingredients to shine and not have the broth be a competing flavor. Being a cheese guy, there’s no substitute for freshly grated Parmigiano-Reggiano.

Finally, my take on the controversial topic of sustainably harvesting ramps: The most sustainable way I know to use ramps in a recipe is to buy them from Berkshire Organics, which sources them from Czajkowski Farm in Hadley. The most sustainable way to harvest them in the wild is by cutting one leaf from each plant. In a large patch in the wild, they can be sustainably harvested with a trowel, being careful to take no more than about 20% of each bunch of plants. Harvested ramps can also be transplanted to your garden. I recommend educating yourself about sustainably harvesting ramps by viewing some of the numerous YouTube videos to be found on the subject before going out in the woods to collect them.