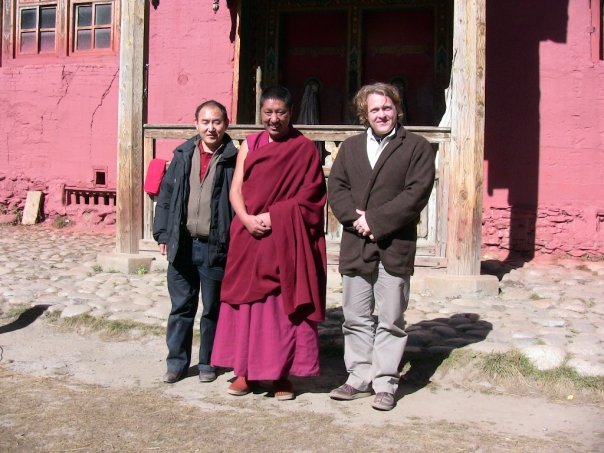 Jeff Wallman, right, executive director of the Buddhist Digital Resource Center in Cambridge and a part-time resident of Southfield, in Tibet.

Southfield — Culture is difficult to define. In a simple sense, we can think of culture as the social structures within a society, the technology used, the languages spoken and the art created. And while culture can feel abstract, we experience the consequences when it is destroyed or left to decay.

Jeff Wallman is the executive director of the Buddhist Digital Resource Center in Cambridge and lives part-time in the Berkshires. Every morning he wakes up to work on preserving the culture of Tibet for an organization he says is “driven to preserve and make Tibetan and Buddhist texts accessible to future generations.”

In 1999, E. Gene Smith (1936-2010), then a scholar of Tibetology and the former director of the Library of Congress office in India, embarked on what Wallman called “his encore career.” Smith decided to digitize the entire library of Tibetan texts he had retrieved from his travels and build the organization called the Tibetan Digital Resource Center that would later expand to become the Buddhist Digital Resource Center.

Wallman joined the organization in 2002. He recently sat down for an interview with The Edge at the Fuel coffee shop on Main Street. After completing his master’s in mechanical engineering from Boston University and working as a corporate engineer for five years, “I found meditation,” he explained. “I needed a break and so I went on several retreats that year until a friend of mine introduced me to Gene. It was a purely serendipitous moment.” 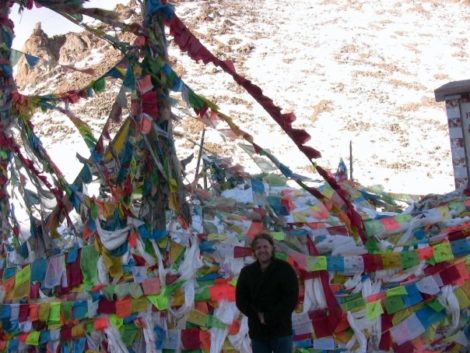 The timing was opportune for a few reasons. Not only was Wallman looking for a career change, but he was a free agent highly skilled in metadata, database design and software systems during the “dotcom bubble.” Unsurprisingly that same year, Smith hired Wallman to handle the technical challenges of digitizing millions of pages of Tibetan texts for BDRC.

In the eight years that followed, Smith and Wallman became close friends, traveling to India for many months at a time to meet with Tibetan monks in exile and collect more texts to preserve. In 2009 Wallman accompanied Smith on a trip to China where they negotiated an agreement with the Southwest University of Nationalities to form a new research database. Shortly thereafter, Smith moved to India (where the organization has an office in New Delhi) and appointed Wallman as the executive director of BDRC.

Smith died in 2010, leaving Wallman to keep the organization intact and focus on the goals its founder had set. Today, BDRC has cataloged and digitized 12 million pages of significant works in Tibetan, Sanskrit and Mongolian.

“One of our biggest goals isn’t simply to archive these texts; it’s to make them accessible,” Wallman said.

That’s why BDRC has partnered with Harvard University to build a digital repository so that scholars and translators can access the texts with ease. But if you aren’t a scholar or translator, you can still access the entire BDRC library online on its website: Wallman also hinted that a mobile platform was in the works.

Interestingly, BDRC does not translate any of the texts it digitizes. Instead, it categorizes metadata, which, in this case, includes only the title and author of each work. Wallman explained that “the reason we don’t translate is because of the sheer size of the collection; it’s just too big.”

One of the famous efforts to translate Buddhist texts is being conducted by an organization called 84000.co. To give a sense of the daunting task ahead, Wallman mused, “They have a team of 200 translators and it’s still going to take them over 20 years to fully translate the Tibetan Canon.”

Wallman appeared extremely proud of the work his team has done. “Tibetan is no longer an endangered language thanks to some of our efforts,” he exclaimed. That being said, he cautioned that there are many languages that are in danger. “You have to understand the works we are preserving are literature; they are like the dialogues of Plato. Some collectors take great care of their libraries, but many of these texts are in danger of disintegration from the elements.”

As a 501(c)(3) nonprofit relying mostly on donations and a few government grants, BDRC needs to be apolitical, Wallman emphasized. “We want our work to remain intact regardless of the political winds in the country,” he said. “We have to be able to work with various governments, including the Chinese.” In fact, he noted that, while the Chinese government’s invasion of Tibet in 1959 was met with public outcry, the government of China has devoted significant funding for Tibetan documents to be preserved in state-owned repositories.

With a new administration that has expressed a complete disinterest in the arts, Wallman believes the grants BDRC needs will vanish. “But”, he said, “that won’t stop us. There is always some wealthy collector who appreciates and understands the importance of the work we do and is willing to cut a check.”

Currently, Wallman splits his time between Cambridge and his home in the southern Berkshire County village of Southfield. Like many in the area, he lamented the absence of high-speed fiber-optic Internet. “It’s really frustrating,” he admitted, saying that “sometimes I have video conferences with people in Taiwan or India and often their Internet service is better than mine. People need to realize that you can only run these types of business here with fluid fiber-optic Internet.”

So far poor Internet speeds have not stopped Wallman. He hopes the organization will continue to grow. Before getting up to leave, he concluded, “We want to preserve these cultures so that the next generations can translate and learn from them. If we don’t, we lose so much.”