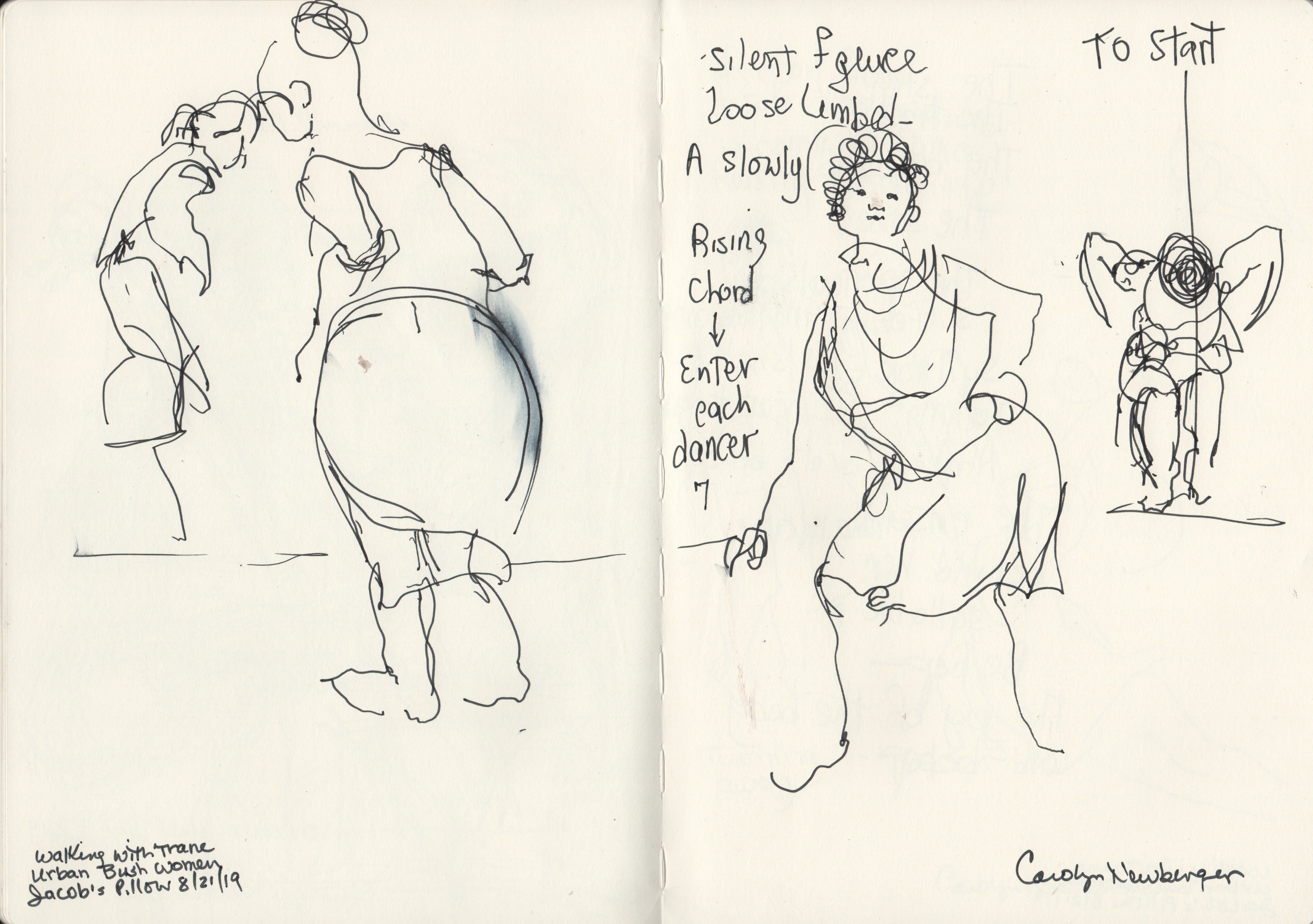 'To Start in Silence.' Drawing by Carolyn Newberger

In the far right corner of a dark stage, a tall figure undulates her body like a rag doll, all rubbery looseness, a sense of testing all the possibilities of her lanky frame.

A second figure appears on the near left corner. She’s more compact, moving her body in her own isolated, more concentrated way.

We become aware of sound. An almost imperceptible sustained dissonant electronic chord slowly rises. As the figures move, new dancers quietly enter the stage and move each in his or her own way as the chord expands until it is fairly ringing in our ears. Now seven dancers are on the stage — six women and one man — and for the rest of the evening, there they will remain, in various configurations of being apart and, increasingly, together, building a community of creative invention.

Note in the following video, dear reader, both Tharpe’s intense spirituality and her swinging self-accompaniment on guitar, which foretell both the reconnection of 1950s jazz with its spiritual roots and the adoption, or, if you will, appropriation of the rhythmical foundation in rock ‘n’ roll, notably by white artists such as Elvis Presley.

The second reference is to the A side of tenor saxophonist John Coltrane’s best-selling 1965 record, “A Love Supreme.” Urban Bush Women, founded and directed by Jowole Willa Jo Zollar, digs into the roots of Coltrane’s powerful stylistic innovation, which distills into the sound of his saxophone and inspired compositions the agonies of enslavement, the yearning for freedom and the finding of exaltation in the 18th– and 19th-century African-American spiritual tradition, and in the evolution of modern jazz.

Coltrane — and especially this recording — along with Miles Davis and George Russell, sparked the definitive departure from the confining Eurocentric musical frames of ragtime, traditional jazz and swing, in which jazz instrumentalists and singers improvise over the formal harmonic patterns of published songs (or, in the jazz vernacular, their “changes”) to a form currently understood as modal jazz.

Recordings of John Coltrane himself were not played during the performance. (Your reviewers were impressed but undaunted by its absence. In a real sense, it all went without saying.)

The evening-long performance was divided into two parts, with an intermission, inspired by Coltrane’s iconic album, “A Love Supreme.” In the first part, we powerfully experienced the evolution and contributions of African-American experience through the projected backdrops, score, movement and song.

True to Coltrane’s inspiration, this performance emerged in real time, an improvisation over a structure of African-American historical and musical narrative, danced with ensemble choruses, interspersed with solos and duos supported by the ensemble, and framed by projections depicting the course and realities of African- American experience.

In one striking passage, the five horizontal lines of classical music manuscript staves were projected first behind the dancers and then over them, making them appear as if they were wearing striped prison uniforms. In our interpretation, these superimpositions represented both the constrictions of Eurocentric musical orthodoxy, from which jazz and the dance it inspired brilliantly broke through, and the disproportionate vulnerability of African-Americans to prosecution and imprisonment when they commit minor offenses.

In another passage, as the improvisations grew more and more athletic and the partnering became increasingly intimate, the one white dancer in the troupe, Stephanie Mas, stood stock-still and gazed superciliously at two African-American dancers. This glaring white gaze gave way minutes afterward to Ms. Mas tenderly holding hands with another woman as they watched with intense admiration a colleague’s brilliant invention.

Improvisation was not confined to music and dance, but also expanded into intensifying vocalizations. Simultaneously with evocative, African-inflected dancing, Tendayi Kuumba emitted low groans and shouts as though exhausted in the labors of harvest. This evolved into tongues and spiritual singing as in a prayer service, then into jazz scatting: a lesson in musical history at once compressed and brilliantly clear.

Then shockingly, a dancer unburdened herself of a marvelously profane, perfectly apposite Miles Davis expostulation. During a recording session, Davis had asked Coltrane why his solos went on so long. Coltrane replied that he didn’t know when to stop. Davis then famously exclaimed “Take the f—‘n saxophone out yo’ mouth!”

Just before the intermission, a voice over a loudspeaker dryly and academically described John Coltrane’s oeuvre, like a professor in African-American Music 101 — yet another, ironic, perspective on Coltrane and his contributions.

The commitment to honest expression and frank communication about this essential music was courageously evoked and echoed through this affecting performance.

After the intermission, jazz pianist George Caldwell joined the Urban Bush Women troupe onstage to carry Coltrane’s inspiration forward as, to be true to itself, it must. His swinging polyrhythms (propelled by independent left- and right-hand riffs) drove the dance and underpinned his melodic inventions on four-, five-, six- and seven-note rows of melody. Infused with passion, quoting hymns and building intensity through repetition and dynamic variation, his overwhelming technical virtuosity summoned Coltrane’s searching imagination.

This investigation also referred to the musical path that led to Coltrane’s distinctive style. For example, shortly after he appeared onstage after the intermission, Mr. Caldwell improvised a slow blues that quoted a piece by the bebop pianist, Thelonious Monk: “Bemsha Swing.” Monk recorded this tune on his “Brilliant Corners” album with Sonny Rollins, with whom he also made a record. Note how Rollins shares Coltrane’s authoritative projection; unadorned, unsweetened sensibility; and perfect intonation. Coltrane took Rollins’ lead and ran with it. Before our eyes, Caldwell took the same lead and ran with it in his own distinctive way.

The evening closed with brilliant ensemble dance with improvisations that foretold jazz tap. Dancers’ bare feet sounded rhythmic counterpoints to Mr. Caldwell’s devastating swing. All this took place before a backdrop of projections of Coltrane and his saxophone, ending with a display of his handwritten template for the Impulse Records recording session, including notations that showed how prayer infused his passion. The audience could not stay in their seats.