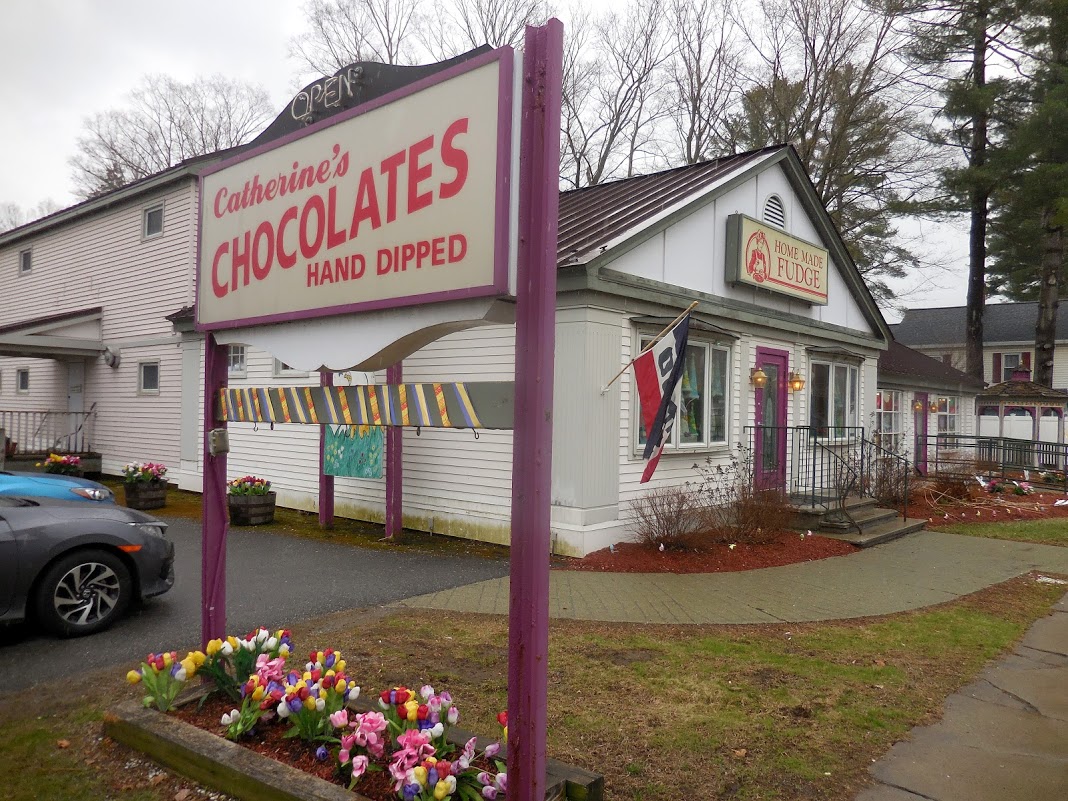 On one level, moving from piloting Apache helicopters for the Army to owning a handcrafted chocolate shop in the Berkshires might appear to be a tectonic shift. But to Trent and Steven Kinney, it actually seems like a natural extension of their life’s work.

“As a commander of a flight troop, it is my responsibility to ensure the welfare of all my soldiers and make sure they are trained to succeed in our mission,” said Trent, who is still on active duty in Poland until the fall. “I plan to take that training and those values to Catherine’s Chocolates. Small businesses are families and succeed together.”

So the two men, both Lenox residents who were married in 2017 at The Mount, set their sights on owning and running a business together. And when Kathy Sinico, the owner of Catherine’s Chocolates, opted to retire after more than 40 years, the Kinneys decided to seize the day.

Steven had just completed eight years as an Apache pilot with the U.S. Army, after having graduated from the U.S. Military Academy at West Point. He served on a variety of stateside bases as well as in Afghanistan. Steven attended the closing on Friday that officially passed the torch from Sinico to the Kinneys.

The terms of the deal were not disclosed but the business was listed for sale online at $699,000. The buyer was Mielke Confections Inc., an S corporation named for Trent’s surname before he married Steven. Sinico agreed to stay on for awhile to help things run smoothly and was busy wrapping packages when this reporter visited on Patriots’ Day.

“We both knew we were interested in owning a business,” Steven said in an interview in his small office wedged in between the kitchen and the packaging station.

The Kinneys had started a small gift-basket business some years back. They assembled baskets comprised of products made in the Berkshires or very nearby: to wit, Bola Granola; Harney Teas; and of course, Catherine’s Chocolates. So they were no strangers to Sinico’s business before they looked into buying it.

Steven has longstanding connections to the Berkshires. He grew up in eastern Massachusetts and graduated from Wayland High School in 2006, although he did live in Pittsfield for a few years during his childhood. After he went away to West Point, where he graduated four years later with honors and a B.S. in math, his family moved to Berkshire County.

Trent is a relative newcomer to the area, having grown up in Minnesota, where he graduated from St. Cloud State University with a B.A. in economics, and met Steven not long after he received a commission as an Army officer. But he did tell The Edge via email from Poland that the region has always held a special place in his heart.

“The Berkshires is a beautiful countryside and easy to fall in love with. I look forward to giving back to the community and settling down in the area.”

Trent also is convinced that his economics degree and military background have prepared him well to become a small-business owner. Indeed, he says he has wanted to open his own store since he was a child.

“Growing up, I worked in the food industry and enjoyed cooking and baking at home,” Trent said. “Food speaks to everyone and brightens anyone’s day.”

The business end will be crucial to the continued success of Catherine’s. No doubt many members of the business community will be relieved that Sinico found a buyer. That portion of Stockbridge Road is already distressed, with several empty storefronts attributed, in part, to disruption from online retailers of the sort that has already crippled the Berkshire Mall. The situation on Stockbridge Road has even prompted officials at Town Hall to consider a set of zoning changes for that area.

As it happens, Catherine’s already has an online retailing business, though the bulk of its business remains brick-and-mortar. Asked if he was concerned about online competition from larger companies that manufacture chocolate, Steven was unperturbed.

“I would say it’s not of the same quality,” Steven explained. “I mean, you can go on Amazon and buy Hershey bars by the case, but finding the same quality of craftsmanship as the quality here—or even at any other small chocolate shop—would be really difficult.”

Only a few days before Easter, Steven pointed to the hand-decorated eggs in their own display case near the front door of the shop. He called them “a very unique product that I’ve only seen in this place.”

“There very beautiful; they’re almost works of art,” Steven explained as he pointed to the multicolored wonders. “Those are hand-formed flowers on top of a chocolate egg.”

The interior of the popular chocolate shop on Stockbridge Road is a throwback to a different era, especially the sales counter room, where knotty-pine, tongue-in-groove paneling and old-fashioned wood-and-glass display cases are the order of the day.

Since he and Trent had just closed on the store, Steven did not have sales numbers from Catherine’s yet and Sinico’s numbers are considered proprietary. But according to the trade publication Candy Industry, U.S chocolate sales totaled $17.6 billion in 2016, up 5 percent over the previous year, and were expected to rise to $20 billion by 2025. Indeed, from 2008 to 2016, the U.S. chocolate market grew on average by 4.1 percent each year.

“We’re not a ‘Mars’ company, but I think our products don’t compete with the large multinational corporations,” Steven explained as he showed a reporter around the store. “We’re definitely more expensive but there’s a reason for that … not only the quality but it’s also the service that comes along with it. I think we have a pretty friendly staff who are always happy to see people in here. We have a lot of regular customers, and we’re happy to keep them, and they know the quality and they know what to expect.”

As we spoke, one man, obviously a longtime customer of Sinico’s, ambled up to the counter. A salesperson quickly asked, “Anything I can help you with?”

“Uh … some chocolate-covered cherries,” he responded with the kind of smile that could only come from someone about to satisfy an urgent chocolate fix.

Catherine’s currently has five regular full-time employees and another four seasonal workers. Steven said his online business tends to be more brisk in cooler weather, a trend that holds true for the chocolate business in general. And that’s a good thing because, for obvious reasons, the product does not hold up terribly well in hot weather.

Many people do not realize how difficult it is to ship chocolate. After all, everything in the Amazon age seems to ship so easily. In the case of chocolate, the main challenge is that its softening point is about 85°F and its melting point is 93°F. Shipments during such weather typically require cold packs to keep the product intact.

“The actual production is a little more difficult, too, and then people just generally don’t want as much chocolate during the summer as they do during the winter,” Steven explained.

Steven acknowledged that neither he nor Trent had “a particular affinity for chocolate” before purchasing Catherine’s. He expects that to change rather quickly. Speaking of changes, Steven does not expect to be making very many at Catherine’s:

“We might be making a few but we won’t certainly won’t be changing the quality of what they produced. If anything, we’ll just be adding things.” He says he’d like to do something to increase sales during the summer and he has an idea.

And chocoholics can relax. Catherine’s will remain open seven days a week.